Rainbow Six has always been known for its tendency to create tense situations. Ubisoft are keen to capture that same experience, which is why they’ve stuck with their “no respawn rule” for their upcoming addition to the franchise: Rainbow Six Siege.

In their regular “behind the walls” blog series, Ubisoft developers have explained why it’s important to go back to the roots of Rainbow Six. “When you go back to Tom Clancy’s Rainbow Six, you go back to one of the first tactical shooters” said game designer Andrew Witts. ”Seeing what makes it tick, deconstructing it and then reassembling it for the current generation. Being a part of that is really cool as a fan of the previous games”

Ubisoft are keen to go back to what made Rainbow Six so popular, where again we’re flooded by shooters that promote run-and-gun or spray-and-pray playstyles.

“If this sounds familiar to you, it’s probably because you’ve played Tom Clancy’s Rainbow Six.” said Ubisoft. “Originally released in 1998, it popularized a new type of shooter where planning and tactics mattered, in an era dominated by over-the-top guns-blazing titles like DOOM and Quake.

“It was a heart-pounding experience through every mission, and we wanted to revive that lethality and tension within Tom Clancy’s Rainbow Six Siege. Ultimately, we decided that the best way to accomplish this was to bring back the No Respawn rule and implement it in such a way that we like to refer to as One Life around the studio.”

The development team hold regular in-house tournaments to help fine-tune the game, and admittedly for bragging rights too. 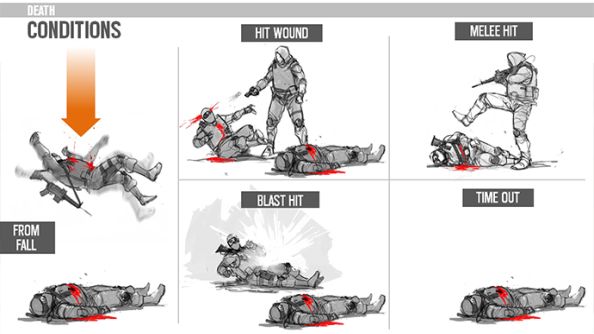 “We’re all huge FPS fans, so this is a very fun way to work together as a team and get feedback on design direction.” stated Ubisoft. “During the early stages of development, we didn’t have the No Respawn rule, and the same guys were always at the top of the leaderboard. Level Artist Chris Hendry and Gameplay Programmer Adam Crawley are fantastic solo players, and their teams dominated pretty much every round.

“Creative Director Xavier Marquis decided to toss this No Respawn rule in to see what would happen, and right away Hendry and Crawley began to struggle, and the developers who had never made much of an impact were now moving up the leaderboard, leading their teams to victory. It didn’t take very long for Hendry and Crawley to climb back up the ladder, but they had to adjust.”

Being dead isn’t fun, as you’re forced to take a backseat until the next match starts. Ubisoft have this covered however with naturally short match lengths, and the introduction of “Support Mode”.

“In a traditional FPS setting without respawn, once the player is dead and out of action they don’t have very much to do.” admitted Ubisoft. “As a player, you want to stay involved, and getting placed on the sidelines with nothing to do is not the ideal experience.

“Yes, losing boots on the ground creates a disadvantage in firepower, but the player still contributes to the team by becoming a source of information. They are able to use limited visibility tools, like the drone and security cameras, or survey from a chopper above the operation zone to keep their team informed of the enemy’s movements.”

If you want to see this all in action, we’ve got fresh, unscripted multiplayer footage from E3 earlier this year.