The Rainbow Six Siege Void Edge release date is just around the corner following the official reveal at the Six Invitational 2020. In true Siege fashion however, we’ve known plenty about the upcoming Operation Void Edge for months now thanks to a mix of official assets, leaks, and datamined information.

Year 4 introduced a host of radical new operators with gadgets ranging from drone-stealing crossbows and grapple hooks, to explosive sniper rifles and cloaking devices. So if you think that the guys at Ubisoft are running out of ideas then there’s plenty of recent evidence to the contrary. Void Edge adds a defender who can run through walls, barricades, and even other operators, plus an attacker with a fully controllable clone.

To keep you fully briefed and up to date on all the latest information about Operation Void Edge, we’ve assembled every scrap of intel in one handy guide. So, whether you want to know when does the new operation for siege come out, or you’re after a rundown of the new map and operators, keep on reading.

What is the Rainbow Six Siege Void Edge release date?

It’s worth noting the the 10 March, 2020 release date for Operation Void Edge is only for annual pass owners, so if you don’t have the Year 5 Pass by then you’ll have to wait another week before you can purchase the Rainbow Six Siege new operators.

In addition, Ubisoft has released the patch sizes for Void Edge, so if you have the tactical shooter on Uplay then you’ll need to prep yourself and your computer for a 77GB download.

How much will the Void Edge operators cost?

Who are the Rainbow Six Siege Void Edge operators?

Oryx is the Void Edge defender. Hailing from Jordan, Oryx’s special ability is the Remah Dash, which allows him to sprint faster than any other operator for short duration and run clean through soft walls, barricades, and knock down operators, including Montagne. Oryx can also climb up through destroyed hatches. As a result, Oryx is a highly mobile roamer, and is best played far from the bomb site.

In terms of kit, Oryx can open hatches with either his Spas-12 primary shotgun or the Bailiff shotgun sidearm. We recommend the MP5 as his best primary weapon, even though it doesn’t come with an ACOG.

Iana is the new attacker from Netherlands. Her gadget is the Gemini Replicator, which creates an identical clone decoy that she can control. The decoy can’t shoot, rappel, or climb ladders, plus it’s immediately destroyed by electricity or a single bullet. There are some clever plays you can make with her gadget, whether that’s teasing out nitro cells and gas canisters, or tricking the enemy into thinking you’re attacking from a different side of the map.

Iana can equip either the ARX200 or G36C assault rifles as her primary – both are great, but we’d argue that the G36C is the one to go for.

The new map for Operation Void Edge is a rework of the Oregon map. Despite many fans loving the map it’s a little too formulaic and Ubisoft has responded to this by keeping the map’s core, while expanding its many problematic chokepoints.

The key changes include a connecting corridor from the meeting hall directly to the kitchen, which makes the two new kitchen-based bomb sites much more viable. A third staircase to the basement and a reworked tunnel entrance to the basement should make it a lot easier to attack the laundry bomb site. Finally, dorms has been expanded slightly so that there’s space to rotate around when defending the site. 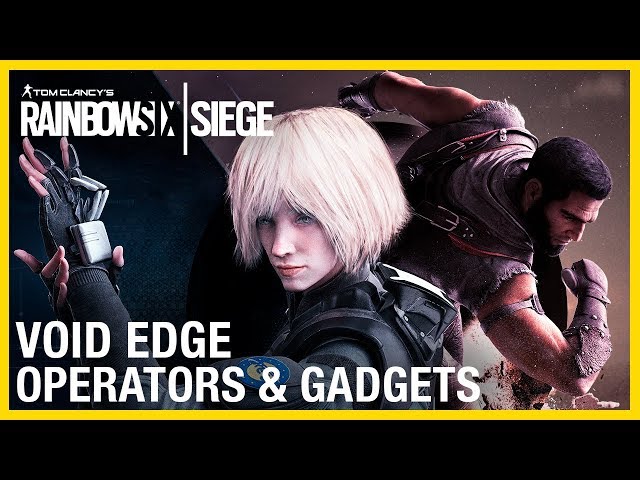 Take a look at the rework in the video above.

We’ll start with the upcoming operator balancing changes. Firstly, Lesion is set to receive a hefty nerf to his Gu mines. You will now need to be close to your Gu mines and have line of sight in order to see the icon above each mine, drastically reducing Lesion’s intel-gathering abilities. The damage has been increased to six damage per tick, but now you’ll no longer receive initial damage for stepping on the Gu mine.

Next up is a small Twitch rework. There is a small tweak to her drone, so now she has three shock charges that will recharge over time. But this doesn’t mean you can use her drone to bully defenders, as they’ll now only dish out a single point of damage per barb.

Some other neat changes include your first drone spawning on the side you choose to spawn on when attacking. Barricade debris has been changed so it will no longer obstruct the player’s view. Finally, the UI has been updated.

There is also a Caveira Elite skin set to arrive before Void Edge launches, plus Lara Croft Rainbow Six Siege Ash Elite skin arriving with the new season itself.

The test server for Operation Void Edge was rolled out with some additional changes detailed about the upcoming season. We’ve got a full breakdown of the Rainbow Six Siege Void Edge patch notes here. Among the changes are an operator rework, an overhauled explosions engine, and a number of attackers getting frag grenades.