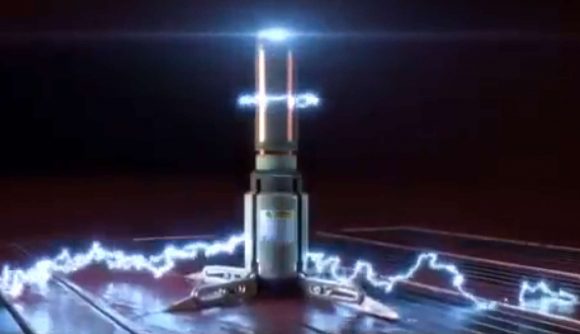 Rainbow Six Siege’s latest defensive operator – teased as ‘the Commander’ in blog posts by developer/publisher Ubisoft – is named Kaid. That’s according to a new teaser trailer that seems to have leaked online.

Posted to Reddit, the trailer shows a gadget that looks similar to Bandit’s battery or Mute’s jammer, but it works on hatches, apparently electrifying them. Those blog posts had hinted at this, and a way to properly counter attackers breaching a hatch has been high on the community’s wishlist for a long time now. As the top-voted comment says: “it’s been such a one-way mechanic for so long.” A reply to that thread speculates: “I’d bet six Schrute Bucks that you can use it on regular walls too.”

The short trailer concludes with the camera inverting, showing that the gadget is placed on the ceiling. The new defender hefts another gadget in his hand and is revealed to be named Kaid, before the full Wind Bastion reveal is confirmed to come at the pro league finals in Rio on November 18.

Ubisoft’s has previously said that: “the Commander” is “as stoic as the mountains are immovable. He is stationed at the country’s legendary kasbah, a training ground that has shocked and awed thousands of incoming soldiers. Strict and imposing, he inspires respect and has taken it upon himself to guide the future of Moroccan Special Forces.” You can check out the leaked trailer via the embed below.

For everything else we know about Rainbow Six Siege’s latest season, such as the Operation Wind Bastion release date, early teases of Kaid and the other operator (who is also said to be from the Moroccan GIGN), and the new map (Fortress), check that link.