Now Ubisoft has announced it’s full plan for Year 6, let’s take a look at the roadmap, including every update coming in Year 6 and Crimson Heist. Year 6 sees a revamp of the usual annual content plan, making big changes to season updates starting with an operator landing in each season, as well as some operator reworks, and battle pass changes.

The rest of the year, however, is still fairly light on details, although we do have a full Year 6 roadmap and know what to expect from the operator reworks, skins, and reputation system plans. Here’s everything we know that’s coming to Rainbow Six Siege Year 6.

There will be a new operator with each season, starting with Flores in YS61, Mina ‘Thunderbird’ Sky from the Nakoda Nations in YS62, a Croatian operator in YS63, and an Irish operator in Y6S4. There aren’t any details on the two outstanding operators just yet, and reworks to some current operators will accompany the new members of the team.

The operator reworks in the Crimson Heist include Goyo, who will lose his exploding shields, instead adopting an explosive device that can be mounted on walls and floors. Mira and Maestro are also getting reworks to their intel abilities, instead attackers can use melee to shatter the glass and affect the defender’s vision.

North Star will adjust Melusi’s Banshee, giving defenders more time to respond to this powerful gadget. Mira and Maestro will also see their gadgets toned down as bulletproof glass can now be melee’d, making it impossible to see through for both teams. Finally, Smoke’s toxic gas will now work similarly to Capitão’s Asphyxiating Bolts, stopping players from denying plants through walls. 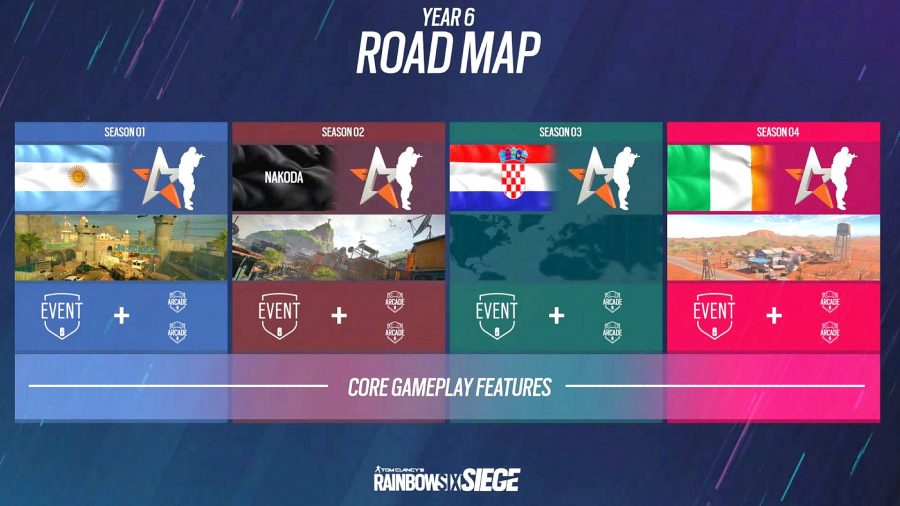 Season three will see three maps get smaller updates, but Crimson Heist sees a rework of Border, to the same scale as Club House. Largely removing debris, but also expanding on key areas and rooms to tidy up and open out the map. Although the identity of the map will stay very much the same.

The only map rework in North Star will be to Favela. This rework will mainly remove the destructible exterior walls featured on the map. The devs want to make the map more cohesive by removing clutter and debris to ensure players have cleaner lines of sight. This could be the update Favela needs to finally introduce it into the competitive map pool.

Ubisoft want to reduce the downtime in matches and plan to do this by adding ‘attacker repick’, allowing attacking players to switch operators and loadouts during the preparation phase to react to the defending team’s setup. ‘Activities after death’ is the second approach, which allows players to use remote-controlled utility once they’ve been killed, such as piloting drones.

Year 6 sees an end to the annual pass, instead each season’s new operator will be included in the seasonal battle pass at no extra cost. The exclusivity period for new operators is being extended, however, so without the battle pass, you’ll have to wait an additional two weeks before being able to purchase the operator. 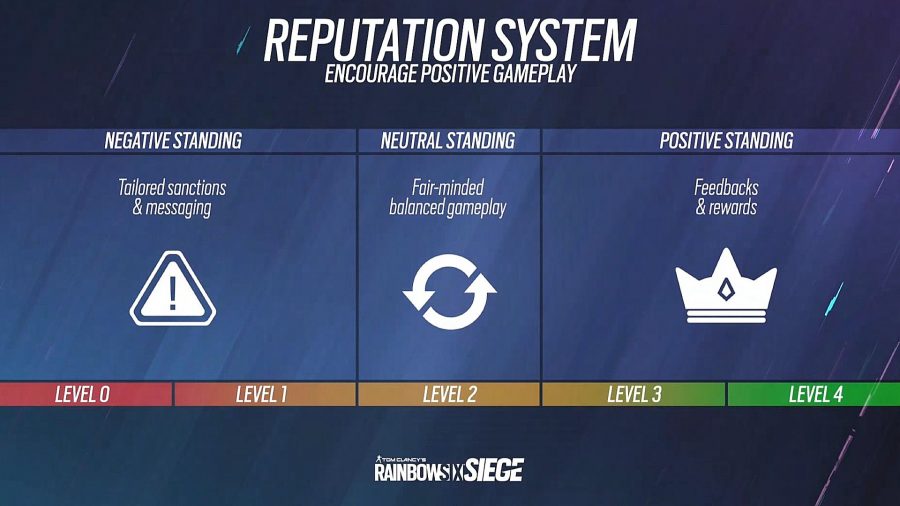 In an ongoing effort to combat toxic player behaviour in Rainbow Six Siege, Ubisoft is implementing a reputation system. The details are scarce, but the intention is that toxic behaviour is recognised long-term and punished to reflect that, while positive behaviour is rewarded and incentivised. There will be five levels to the reputation system, with Level 0 involving possible repercussions such as not being able to queue for ranked matches, while Level 4 will feature rewards, although those rewards haven’t been confirmed as of yet.

If you’ve never been able to capture your best plays because of hardware limitations then not to worry as a replay system is coming. This will capture the full map, allowing you to switch perspectives just like you’re spectating in a pro match.

Elite skins will feature customisation, to mix and match skins. Speaking of Elite skins, a new one for Kali is on the way in Year 6. Alongside the Elite skins feature, Year 6 will add brand new skins, including a potential Rick & Morty collaboration, as well as a Zofia skin inspired by Resident Evil’s Jill Valentine.

That’s not all for the Rainbow Six Siege Year 6 roadmap, here’s every detail covered in the reveal, including more information about the bulletproof cam rework, armour and health changes, and a possible tabletop game.