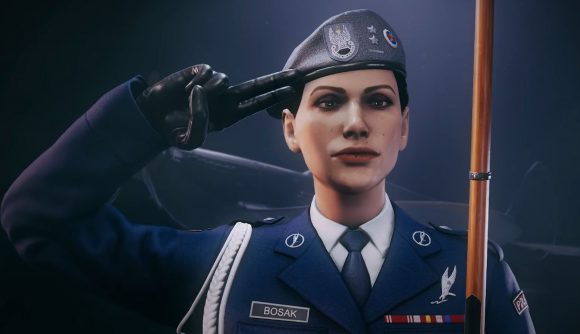 As you can see in the clip posted by developer Ubisoft on Twitter below, Zofia’s new Elite Set brings a “Duch Bojowy uniform” skin. The skin adds a navy uniform – with sunglasses tucked into the pocket – and grey beret, and seems to be inspired by a Polish military uniform. The phrase ‘Duch Bojowy’ roughly translates to ‘Fighting spirit’ according to Google translate. As you can also see in the clip, the op’s new set also brings a victory animation, as well as a “KS79 Lifeline” gadget skin and “LMG-E, M762, and RG15” weapons skins.

Plus, as is usual in the FPS game’s Elite Sets, there’s a brand-new charm to adorn your weapons: an “Elite Zofia Chibi” charm.

Take a look at the new gear for the attacking op. below: