Razer has pulled off some serious thermal magic by squeezing a discrete Nvidia GTX 1650 GPU into its super slimline Blade Stealth 13 ultrabook. Traditionally if you wanted any sort of graphical performance out of your 13-inch diddybook you’d have to rely on an MX150 at best, but with the Turing-based GPU inside, the new Stealth Razer is redefining the sort of gaming you can do on such a wee laptop.

And I really wants it. I’ve always loved the looks of the Blade Stealth, with its diminutive size and stripped-back, clean aesthetic, but such a graphical sacrifice was tough to bear. And, while the GTX 1650 might not be pulling up any trees in the high-end gaming stakes, it’s a quality 1080p GPU, and pretty darned close to the RX 570 in frame rate terms.

Obviously the thermal restriction of being placed inside a slimline Blade Stealth 13 chassis is going to mean the TU117 GPU isn’t going to be operating at its peak frequency, but Nvidia’s mobile silicon of the past few generations has been impressive powerful and efficient.

That’s not the only feather in the new Razer Blade Stealth 13’s cap, however. Announced at IFA today it’s also going to feature an Intel Ice Lake CPU – the quad-core, eight-thread Core i7 1065G7. Forgetting the fustercluck of a naming scheme for a second, that means we’re talking about a bit of 10nm Intel silicon with a Gen11 GPU baked into it rocking Iris Plus power. And that means 64 execution units and the most powerful processor graphics Intel’s ever jammed into a processor. 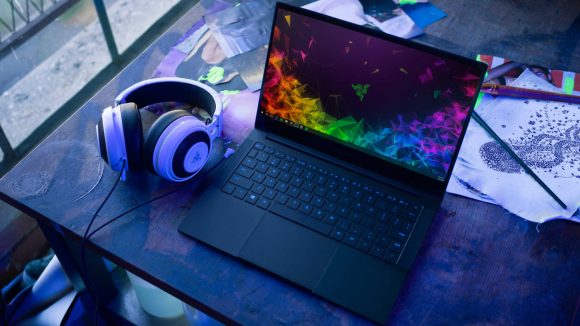 Paired up with the GTX 1650 and Nvidia’s Optimus tech that means you should get a great balance of graphical performance and efficiency away from the plug socket. Hell, you could even just nix the Turing GPU when you’re on the move and rely on the Intel chip to keep that battery life up.

There are set to be a pair of GTX Model versions of the Blade Stealth 13; one with a 4K touch panel and another Full HD option. Both of which will come fully calibrated and running to 100% of the sRGB colour space, but I’ve got to say with a GTX 1650’s performance I’d be more comfortable running the 1080p version. And at just 13-inches personally that’s just way too small to justify a 4K display.

Razer is also shipping a Mercury White edition of the Blade Stealth 13 with the same Ice Lake Intel processor, but presumably (because it’s not down as the ‘GTX Model’) without the Nvidia graphics silicon inside it. Still, you get the Iris Plus goodness as well as that Full HD display, and rather lovely white finish.

To be honest, I’m not sure which I’d rather have. 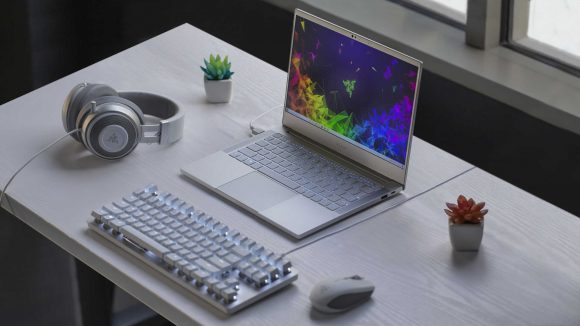 What is the Razer Blade Stealth 13 GTX 1650 release date?

But they’re not available yet, so we’ve got a little time to figure out which one we want – the new Razer Blade Stealth 13 models are out at the end of September, with prices starting at $1,500 and will be available in the United States. Us poor wretches in the UK, France, Germany, Nordics, China, Australia, Hong Kong, Singapore, and Taiwan will have to wait a little longer I’m afraid.

Fingers crossed we’ll be able to get our hands on the new Blade machines soon to put them through our benchmarking suite and see just how those Iris Pro and thermally constrained GTX 1650 GPUs perform in the svelte 13-inch Stealth chassis.

Which would you prefer – GTX Model or Mercury White? Join the conversation on this article’s Facebook and Twitter threads.