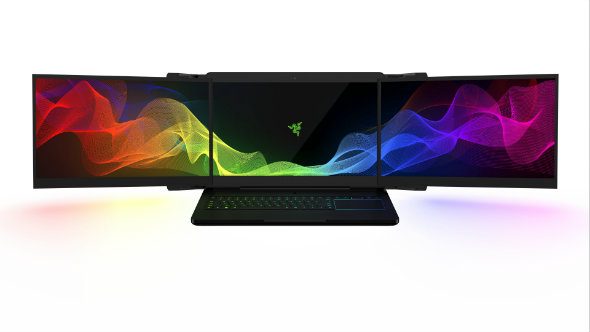 At this year’s CES, Razer demonstrated its Project Valerie gaming laptop prototype, which featured triple screens mounted to a single laptop. Sadly two of these were stolen during the show, and the product isn’t likely to ever see the light of day, but that hasn’t stopped an intrepid DIYer on YouTube showing owners of high-end gaming laptops how to build their own version. And all it takes a bit of glue, some door hinges and cables. Oh, and two more screens.

Rather have three screens for your desktop instead? Check out our guide to the best gaming monitors.

Hosted on the YouTube channel JerryRigEverything, the construction is actually rather simple. First you’ll need to grab a couple of these AOC e1659Fwu 16-Inch Ultra Slim monitors, which retail for $99 on Amazon.

They’re fully powered by the laptop’s USB ports, and are then simply mounted to the rear of the laptop’s screen using a series of door hinges and extremely tough epoxy glue. It’s so simple to build that the entire tutorial lasts just eight minutes, and talks you through the entire process. If there’s one issue with this hack, it’s that the final product isn’t exactly gorgeous whilst folded up, nor lightweight. But hey, who cares when you can play Overwatch on three screens from the comfort of your hotel bed? Here’s the full video showing you exactly what you’ll need, and how to build it.

Thanks IBT for pointing out this DIY project.