Razer is considering releasing a line of branded gaming chairs – so best start a campaign on Facebook, I suppose. It worked for the toaster. William Tsia, Razer’s GM of sales and marketing in Asia Pacific has said that the company is looking to invest further in software and services to improve its renown with gamers – and it’s also considering a gaming chair.

If you are rocking the full Razer setup, you’re likely thirsty for a green and black gaming chair to match. There’s plenty out there, but none available from the company itself. Luckily the company is considering (publically, which is a good sign) releasing branded fare, according to an interview with William Tsia on DigiTimes.

Razer is also gearing up to release its first gaming monitor, taking on the likes of other peripheral and component companies in the crowded monitor space. The more the merrier, I suppose. The Razer Raptor 27-inch was teased back at CES at the start of the year, however, isn’t out yet. It rocks an IPS panel, HDR400 spec, 144Hz refresh rate, and, you betcha, RGB lighting for days.

We’d also like to see Razer go ahead and match its Razer Quartz lineup with a pink gaming chair. Please, Razer. 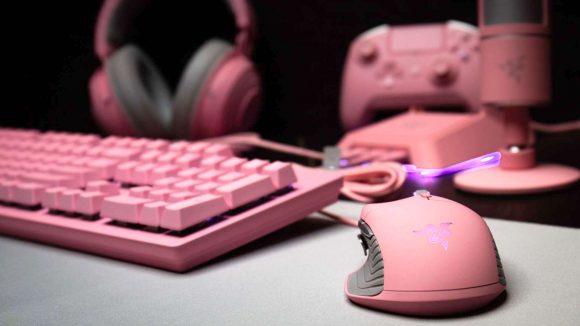 It’s also heartening to hear Razer committing more to its software department. Bundled software is notoriously poor with many products, even quality ones, and the best software of the bunch is a title still up for grabs to any manufacturer willing to put the time in. As for services, Razer has made various attempts to score itself a game store and rewards currency scheme. While the store dwindled and closed, users of Razer Gold are reportedly up 175% on year…

Razer’s sales are reportedly 50% hardware peripheral sales – its bread and butter. However, its gaming notebook department is creeping up with 35%, and software and services sits at just 10%. Room to grow, that’s for sure.