RazerCon 2020 has brought us plenty of new products, such as the Razer Seiren Mini, but none stand out more than the Razer gaming chair. It might seem like it’s a long time coming from a company that’s usually ahead of the curve, but this is a market that Razer didn’t want to rush into. In fact, it wanted to be taken seriously – meaning the chair brings no RGB but some innovation.

The Razer Iskur, as it’s called, might seem like other gaming chairs at first. After all, it has 4D armrests, high-density foam cushions, and multi-layered synthetic leather accented with Razer’s signature green stitching to give it a bit of an identity. Razer has even emblazoned the company motto “For Gamers. By Gamers” on the base.

The devil is in the details if you’re wondering where the Razer Iskur stands out, however, as all you need to do is turn your attention to its ergonomics. Lumbar support cushions aren’t entirely useless, but over time they compress with body weight, making them somewhat ineffective. Razer has done away with this idea entirely, opting for a unique external lumbar support system with 26 degrees of customisation to improve your posture.

Razer claims that this built-in back support system works with full curvature of your spine, helping to keep it in a neutral position, reducing aches and strains over longer gaming sessions. And it’s made with the same synthetic leather that’s been treated to prevent corrosion, just in case you sweat that much during a particularly competitive match or accidentally spill something. 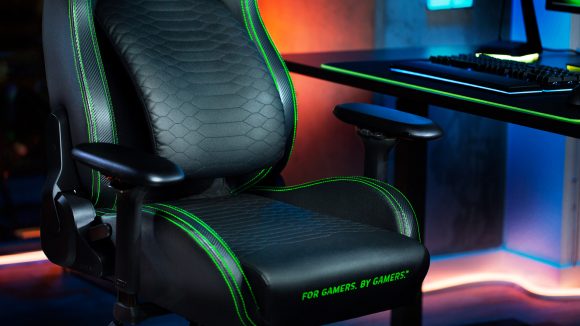 As well as different body shapes and sizes (supporting up to 136kg / 299lbs and 190cm / 6.2-inches), the Razer Iskur was built with various mannerisms in mind. Gamers tend to throw their arms about when gaming, which is why you can adjust the arms in more ways than most gaming chairs offer.

The arm rests have even been designed with gamer rage in mind, as you can reportedly smack them in frustration without worrying that you’ll break it – but we wouldn’t recommend it considering the Razer Iskur costs $499.99 USD / €499.99.

The Iskur gaming chair is currently exclusive to Razer’s website, so head on over to find out more or buy one today.