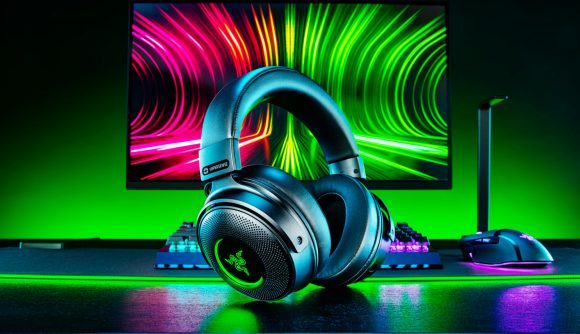 The Razer BlackShark V2 might be the best gaming headset you can buy right now, but it owes a lot to Razer’s inaugural Kraken range for paving the way. It turns out Razer isn’t done with the cans that kicked it all off, though, with four new Razer Kraken V3 headsets on the way – two of which channel their inner Beach Boys with good vibrations.

Kicking things off is the Razer Kraken V3 X, which is the series’ new entry-level gaming headset. It’s not quite as advanced as its brethren, with smaller Triforce Titanium 40mm drivers, a fixed microphone, and no leatherette in sight. The slimmer $69.99 / £69.99 price tag does afford you standard 7.1 surround sound, inline controls to adjust the volume and mute, and Chroma RGB lighting, however.

It might be worth spending the extra $30 / £30, however, as the Kraken V3 sports the same design as the more premium alternatives. It has 50mm drivers, detachable 6mm cardioid microphones, a hybrid fabric and leatherette memory foam approach, THX Spatial Audio, and even shinier Chroma RGB lighting.

The Kraken V3 Hypersense is the first one that demands your attention as Razer’s new flagship haptic headset. Yes, Razer is doubling down on the very same haptic feedback technology that debuted on the Nari Ultimate back in 2018, but with a few improvements. The advanced L5 driver boasts a wider frequency than the haptics of old, letting each ear cup react to your game’s sounds independently in real-time rather than simply switching on or off during key moments. You’ll also be able to fine-tune the strength of the vibrations so you don’t unexpectedly turn into a bobblehead the moment you’re faced with an explosion.

All of these cans connect to your gaming PC via USB-A, meaning the only way you’ll break free from wires is by opting for the Kraken V3 Pro wireless gaming headset. Alongside the same Hyperspeed cordless tech we see on the Razer BlackWidow V3 Mini, it features the latest haptic feedback, and even a better 9mm Hyperclear supercardioid microphone to help combat the lack of clarity that often comes with a wireless receiver. Unlike the others in the series that are out today, the Razer Kraken V3 Pro won’t be available until later in the year, so you’ll have to wait to get your hands on one.

Razer says it’s focusing on haptics because it’s the next sensory step towards full immersion, after it’s already mastered sight and sound. You can consider us both terrified and intrigued to see what it has in store for taste and smell in games at some point in the future.