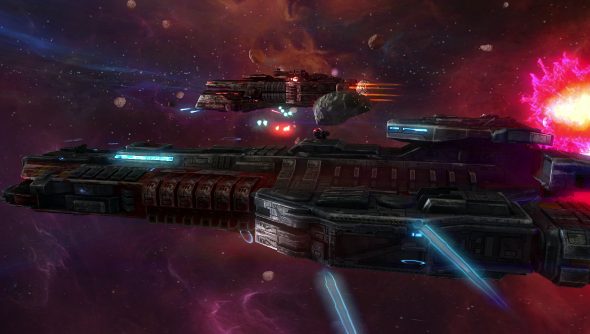 When Runic Games’ co-founders, Travis Baldree and Erich Schaefer left the Torchlight studio and set up Double Damage Games earlier this year, they had yet to announce their first project. However, given their past, developing Fate, Diablo and Torchlight, it wouldn’t have been bonkers to expect them to make another ARPG.

Rebel Galaxy is not an ARPG. It’s a Firefly, outlaw and ‘70s sci-fi inspired space adventure.

Set in a randomly generated universe, Rebel Galaxy puts players in the gravity boots of an outlaw captain of a battle-hardened capital ship.

Combat is all about action, controlling individual turrets or firing off broadside attacks and devastating multiple targets. But fightin’ isn’t the only thing outlaws can get up to. Trading, mining and scavenging offer breaks from the blowing up of enemy ships.

And what is space without shifty aliens to make deals with, hapless traders to protect and mercenaries to hire, work with or hunt down? Rebel Galaxy has that covered too, it seems.

It’s due out next year.