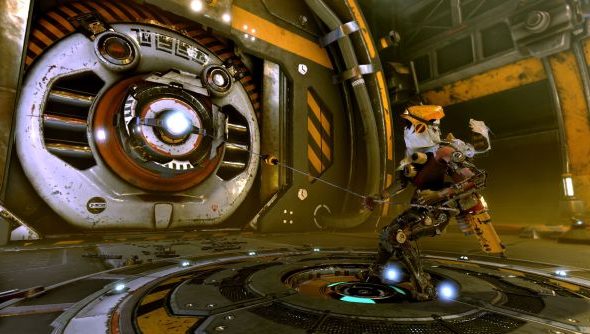 It’s amazing how many games are showing at E3 that we still actually know extremely little about. And that’s even after we’ve played them a bit.

Case in point: Microsoft’s Xbox One and PC exclusive ReCore, which has been especially hard to pin down ever since it was announced at last year’s E3. This year’s Xbox presserthrew a new trailer our direction, but we were still none the wiser.

Now, a 10 minute gameplay video has hit the web courtesy of Gamespot and, finally, we can kind of get to grips with just what Keiji Inafune and co. have in store. Well, sort of.

As you can see from yourself, the off screen video shows 10 minutes of – dare I say it – quite old school third-person action. There’s lots of shooting, there’s lots of running, there’s lots of jumping. In fact, the whole thing plays out like one long series of boss battles, with play moving from one locked off cavern to another.

Take a look elsewhere around the web and you’ll see said video is getting quite a mixed press. For me, I’d need to see more.

Yes, that’s something of a cop out, but given the talent behind the game – talent that’s worked on the likes of Mega Man, Metroid Prime and Batman: Arkham Origins, amongst others – it seems slightly ill-advised to take all too much from ten minutes of play. Ten minutes that all takes place in one area.

Hopefully Microsoft will cast more light on ReCore in the coming months, possibly at Gamescom. Anything that showcases more abilities of our robot buddy would be peachy. If not, we’ll just have to wait until it comes out on 13 September.