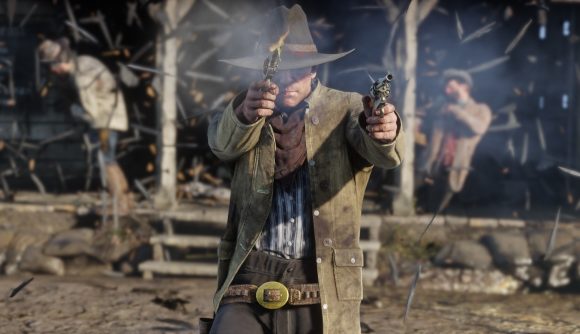 It looks like Rockstar’s battle to stop Red Dead Online players from using mod menus to spawn in or pose as members of the KKK is set to continue. While the Red Dead Redemption 2 developer issued a fix last month, some hackers have found a way around it.

One of the more prominent paid-mod menu creators for Red Dead Redemption 2 posted an update in its Discord on July 9 stating that the mod menu had been updated to bypass Rockstar’s fix. While it’s hard to say how many people are using that mod menu, the cheat supplier’s website claims to serve 3,612 active subscriptions across Red Dead Online, PUBG, and Rainbow Six Siege. Regardless, It wasn’t long until people began running into griefers posing as the KKK once more, with one person recording their encounter and posting it online.

We reached out to Rockstar for comment and were provided with the following statement: “We are aware of a few individuals that used cheat tools to generate racist character models and messages in the PC version of Red Dead Online. We take these actions very seriously and, as per our policy, any form of racist and abusive behaviour in-game will not be tolerated and any players found to be in violation of these policies will be banned.”

The way the cheat works is simple, and if you search on YouTube, you’ll likely come across a few mod menus that feature it. The mod menu gives you the option to spawn in or pose as any character model from Red Dead Redemption 2’s base game. Once you generate the character as an NPC, you can command it to attack others.

This particular cheat became more visible earlier this year in Red Dead Online after griefers spawned in two-headed skeletons to sucker punch randoms, with various run-ins winding up on Reddit. As the Black Lives Matter movement grew in prominence following the death of George Floyd, however, so too did the frequency of encounters with the KKK in Red Dead Online, with one player sharing that they were targeted due to the race of their avatar.

Last month data miner Tez2 reported on Twitter that Rockstar implemented a fix for this by updating Red Dead Online’s anti-cheat to check if a character spawned in game matches that of the KKK. If it does, it becomes instantly deleted. The new clip below, however, depicts a griefer swapping their character model for that of a klansman. That’s why Tez2 believes this won’t remain a problem for long.

It checks if you are in online, detects an event that spawns peds, check if the ped model match any of the KKK models and instantly deletes it.

“Rockstar’s fix detects any NPCs that spawn with KKK NPC models and removes them in the process,” They explain to us. “It mainly focuses on NPCs, not player characters. Cheaters found their way around [the fix] by changing their character model.

“This won’t be hard to fix. Simply expanding on the same fix, by checking whether the player model matches any of the KKK NPC models and removing or restoring it to default character, should do it. It’s just a matter of when we shall get this new fix. It may even happen soon.”

We managed to track down one of the mod creators behind Red Dead Online’s punchy two-head skeletons. They deny being behind the clip above but do explain why they think Rockstar will struggle to stamp out paid mod menus that offer a workaround for spawning in the KKK.

“[Rockstar] depends on downloading the file, finding a byte signature, and then checking if that signature is found in the game,” the mod menu creator says.” If true, ban. But if they don’t have the file…” – at this point I’m sent a meme that says “there’s nothing they can do to stop us”.

While this could lead a merry chase between Rockstar and hackers, as they can update their mod menus once they’re detected, the modder admits this whole saga would end if Rockstar swaps or takes the klansman’s character model out of the game. But what if someone was to put it back in?

“You could, but no one else would see it,” they reply. “But it probably has some event or side mission in [Red Dead Redemption 2], which is why [Rockstar] don’t do it. You can only see someone else’s model because it’s in your game files. It’s not like it’s streaming a model from someone else, It just sends out a hash, and that hash is linked to a 3D model in your game files.” 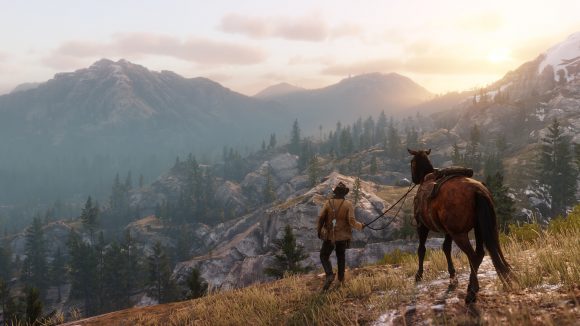 This current situation has intensified Red Dead Online players’ desire for private lobbies. Earlier this year encounters with griefers escalated when one hacker found out how to manipulate gold bars. What followed was players getting banned for stumbling across and opening hacker’s treasure chests. Even between moments like these, it’s not uncommon for a griefer to turn you into TNT and blow you up while you’re trying to take in Red Dead Redemption 2’s vistas.

Even outside of encounters with hackers, a lack of content has driven players to find their own fun, with one group of Red Dead Online players holding a clown-themed fashion show in protest of Rockstar.

Realistically, given the effect of Covid-19 on the pace of development, it’s unlikely something like GTA Online’s private lobbies can arrive in the wild west anytime soon. As Kotaku reports, production at Rockstar has slowed down as staff adjust to working from home, with higher ups keen to assure them that it’s okay to not be productive in a time like this. Plenty of players, however, still feel like something needs to come along to break the cycle soon.