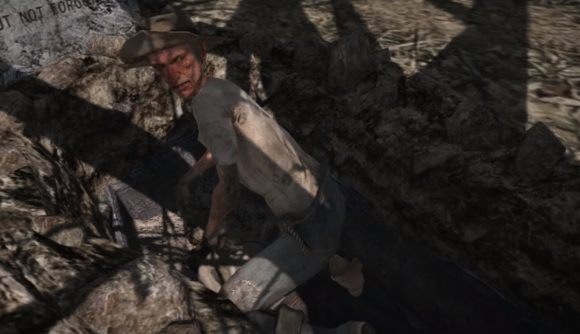 One of Red Dead Redemption’s most memorable, if not creepy, characters has been found in Red Dead Online‘s files. Dataminer VideoTech reveals on Twitter that businessman-turned-grave-robber Seth Briars was added back in 2018 as part of the western game’s first update, but has either been cut or is being saved for something new.

VideoTech goes on to theorise that the gold-crazed NPC may appear in the future as he has 41 lines of dialogue that are completely finished. One of those lines refers to a mission, so he could pop up as a quest-giver like Harriet Davenport or Gus Macmillan in the Naturalist update. Hunting for gold with Seth would be equally mad and brilliant.

In case you haven’t played the first Red Dead Redemption, though, Seth is a certifiably insane chap who spends his days digging up graves for treasure after his gold prospecting partner died, taking a map he hopes will lead him to vast riches. He also appears in the Undead Nightmare DLC and is a playable character if you download the Liars and Cheats update.

While he may pop up, it’s also worth noting that he may be a cut character Rockstar has no plans for. Either way, we’ve reached out to Rockstar to see if we can find out any more information.

A very interesting finding here.
Seth was added to Red Dead Online. However, remains cut/or reserved for future content. This appears to the character from the first Red Dead Redemption.

He also has 47 dialogue speeches, I'll upload them soon. pic.twitter.com/hFvX9DJoi2

In the meantime, if you’re looking for other things to do in the open-world game, we have a guide on how to get into RDR2 RP. You could even roleplay as Seth if you like.