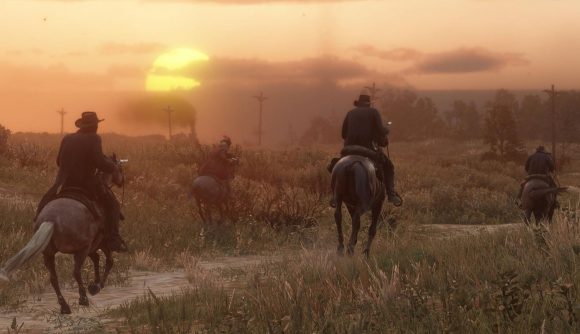 Although Red Dead Redemption 2 is set in 1899, almost 20 years after the first set of rules for American football were created, the open-world game has little in the way of sporting activities for wandering outlaws. Some Red Dead Online players have decided to fix that with pigby, a violent mash-up of rugby and the NFL.

As shown in this Reddit compilation, the way a round of pigby works is simple. One player acts as the referee, walking to a mid-point between two teams in an open space, and tosses down a small pig’s corpse. Then the opposing sides run headlong into each other fists and elbows out, until one manages to pick-up the carcass and run with it the other side of the playing field. Imagine a wall of death at a heavy metal concert, but there was a dead animal in the middle everyone was trying to catch amid the black eyes and stiff digs.

The Reddit thread lists a Facebook group that plays pigby, but they’re on Xbox. You’ll need to rally your own mates, find a suitable field, and get your own piece of animal hide, if you want to bring pigby to PC.

It’s no wonder some enthusiasts of the western game felt inspired to invent an activity, since a lack of official updates from Rockstar has been a bone of contention. Just two weeks ago, a gang of outlaws dressed as clowns in protest of Rockstar’s lack of content. The logical next step is to host mass games of pigby as clowns to take the demonstrations up a notch.

If you’d like some sweet sounds for your sporting ventures, Irish comic Blindboy is streaming improvised music to his own Red Dead escapades. Using our best horse guide and best fences guide, you might be able t make up a sport of your own.