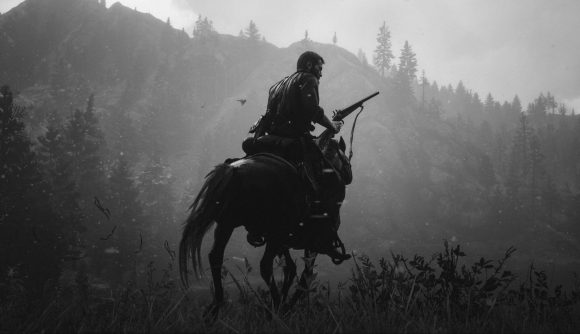 In-game photography has become one of the more popular ways to enjoy open-world games of late, peacefully roaming the environs for shots, or manufacturing a particular situation, then switching to photo mode to capture it. A new study has revealed that Red Dead Redemption 2, Grand Theft Auto 5, and Skyrim are among the favoured spots for players looking to grab a few snaps.

Photography gear review site Shotkit did some research on which of the most popular games get photographed the most. The methodology is simple: the games on this list, cross-referenced against virtual photography hashtags on Instagram. Surprising nobody who’s ever ventured in the new frontier, Red Dead Redemption 2 tops the list, having generated 165,228 posts of virtual photos on the ‘Gram. Second to the western game is Grand Theft Auto 5, the crime game inspiring 146,495 posts.

Fortnite, The Elder Scrolls 5: Skyrim, and Horizon Zero Dawn round out the top five, and Forza Horizon 4, Ghost of Tsushima, The Last of Us Part 2, Uncharted 4, and The Sims 4 fill out the top ten. All popular games that either have rich, beautiful worlds, or in the case of The Sims 4 and Fortnite, allow so much creativity, you can create some very cool images if you’ve the patience and know how.

In the study, professional in-game photographer Leo Sang commented on what makes a worthwhile photo mode. “The camera’s movement can’t be too restricted, the wider the movement range, the easier it is to compose your shot,” He said. “And the same applies to the other settings, field of view, roll angles, depth of focus – being able to fine tune your shot helps you experiment and create a lot easier.”

Red Dead Redemption 2 became a safe haven for real life camera enthusiasts who found themselves housebound in the pandemic, we spoke to a bunch of them about it here. The new Outlaw Pass for Red Dead Online launched this month, offering some extra free gold.