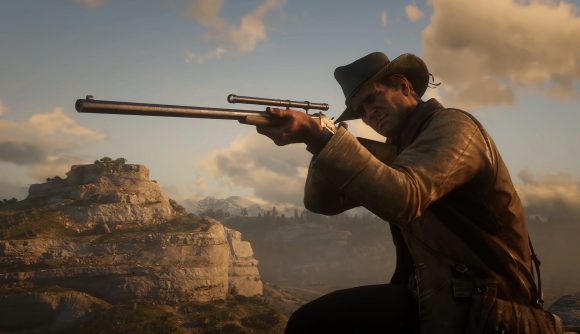 The first phase of the Red Dead Online beta goes live today, allowing some players access to the multiplayer content provided as part of Rockstar’s latest foray into the Old West. And because this is 2018, Red Dead Online contains something that looks a lot like a battle royale.

That information comes from game files which leaked on Twitter (which you can see below) that reference a game mode named Make it Count. The files describe the mode as “a true test of resourcefulness,” and simply tells players to “be the last one standing. With a gradually shrinking player area, there’s nowhere to run.”

That’s pretty recognisable to anyone who’s played a battle royale this year (and even those who haven’t), but Make it Count also comes in a bunch of different varieties. There are several different maps – Tall Trees, Stillwater Creek, and Strawberry – and two different weapon variations. In Tall Trees, you’ll be given a bow and “a handful of arrows” to finish off your opponents, while Strawberry and Stillwater Creek offer “nothing but a handful of throwing knives.”

That sounds like it’ll make for an extremely stealthy battle royale. Red Dead’s weapons might not have made for the slickest gunplay in comparison to its battle royale competitors, so leaning into something more low-tech could prove an effective twist on the formula.

Other modes include a series of different horse races and the team deathmatch style Team Shootout. There’s also Name Your Weapon, which is a free-for-all mode in which using some weapons nets you more points than using others, and Most Wanted, which pits players against one another using a bounty system to make certain kills more valuable.

Red Dead Redemption 2 proved phenomenally popular when it launched last month, selling more in its opening week than its predecessor managed in nearly a decade. We’re still waiting on news of a PC release date, but at this point I think we can be fairly certain it’ll arrive one day. If you’re planning on jumping into the online beta, check out the Red Dead Online release times – access is rolling out over the next few days, and it’s only those who own the game’s ultimate edition who’ll be able to ride out later today.