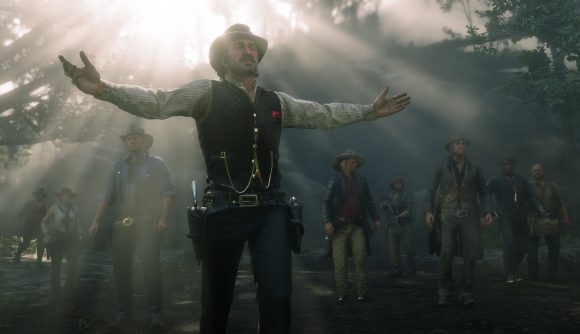 Red Dead Redemption 2 Online launches tomorrow – only in beta, and only for certain players. It’s the start of rolling launch for the cowboy epic’s multiplayer component, and one that’ll be distributed based on how much money you’ve spent and how early you logged on for the first time. And yes, it also means we’re one step closer to Red Dead on PC.

Ultimate Edition owners will get to play the game on November 27 at 5:30 PST / 8:30 EST / 13:30 GMT. If you bought the standard edition and played on launch day, you can get in on November 28. If you played between October 26 and 28, you can log in on November 29. Everyone will be able to play on November 30. There are no specific release times for the latter dates.

We’ll find out more details on what to expect tomorrow, just ahead of the beta’s launch. Rockstar tells Variety that you’ll be able to create posses to ride with friends, take on some number of narrative-driven missions, and do all the hunting and fishing you could in the main game.

Staggering the launch by when you first played is an unusual strategy, but given Red Dead Redemption 2 sales and the messy launch of the online component of the similarly successful Grand Theft Auto V, it seems Rockstar wants to spread out that server load as much as possible.

The success of GTA Online was certainly a factor in getting the game ported to other platforms, including PC, and we are now a little bit closer to the (as yet unconfirmed) Red Dead Redemption 2 PC release date. With Red Dead as wildly popular as it’s been, there’s a statistically significant chance you’re already playing it on another platform. If so, consider this your PSA that there’ll be a new mode to enjoy this week.