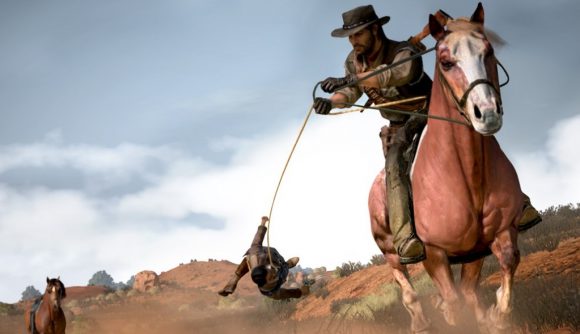 Red Dead Redemption 2 is finally out on PC, but an effort to bring the original game to PC has now been cancelled thanks to a lawsuit filed by Take-Two Entertainment. The Red Dead Redemption: Damned Enhancement Project would have brought the PlayStation 3/Xbox 360 game to PCs with enhanced graphics and new features.

TorrentFreak has obtained a copy of the lawsuit (.pdf), which was filed in the Southern District of New York December 26 and names mod developer Johnathan Wyckoff and ten unnamed co-defendants. In it, Take-Two alleges that Wyckoff planned to “distribute unauthorized software files that would dramatically change the content of Take-Two’s video games” by importing the original Red Dead Redemption map into Red Dead Redemption 2 and allow players to play the first game on PC – “a platform for which Take-Two itself has not yet released the Red Dead Redemption game.”

In response to the lawsuit, Wyckoff has updated the project thread on the GTAForums, saying the project has been cancelled. Take-Two had sent him a cease-and-desist letter in September, but the lawsuit alleges this was ignored, leaving the company no other choice than to file suit.

The lawsuit disputes Wyckoff’s claims to be merely a ‘hobbyist,’ and says he has actively sought donations through Patreon and Streamlabs as he has worked on his mod.

On the forums, Wyckoff says he was surprised by the suit, and that he had been “debating” cancelling the project, but had gotten “too caught with life stuff.”

“I want to step away from any R* game now,” he wrote. “I do not want this law suit can not afford it.”

The lawsuit is detailed, bringing in screenshots from Wyckoff’s Discord server, links to YouTube videos and livestreams, and tweets he made that show he had not planned on complying with the original cease-and-desist letter he received from Take-Two.

Take-Two reckons that Wyckoff’s project has resulted in damages that amount to at least $500,000 USD (approximately £382,262), reasoning that players who might be interested in playing Red Dead Redemption 2 might buy an Xbox 360 copy of the original Red Dead Redemption and – following Wyckoff’s instructions – rip the game to play it on PC, undercutting sales for the new game.

Wyckoff says if Take-Two had given him more time he would have cancelled the project voluntarily; however, the company’s lawsuit says he repeatedly ignored its warnings, and it now seeks injunctive relief to prevent the project from ever moving forward.