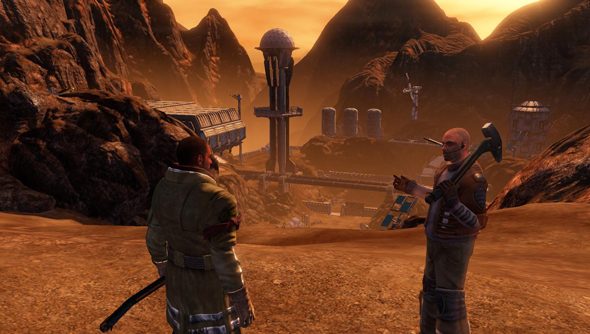 The best and most fun Red Faction game – 2009’s Guerilla – has finally scrapped its ties to Microsoft’s dying Games for Windows Live platform and moved over to fully embrace Steam’s Steamworks system.

Let’s all celebrate by smashing up some buildings in this annoyance-free future.

We knew the change was coming, but Red Faction’s current custodian Nordic Games today announced the new version is live. The transition comes bundled with some new features too. DirectX 11 is now supported, the multiplayer has had some tweaks and new maps added for Wrecking Crew, a new mode called ‘Behemoth’ has been added, voice support is now included, and Steam Trading Cards are now supported. Not a huge change, but a pleasant buff-up of the existing game.

If you were already half-way through Guerrilla’s campaign, you’ll be relieved to know that you can migrate your saves from Games for Windows Live across to Steam.

The full list of changes have been published by Nordic Games over on the Guerilla Steam Announcements page.

The new version of the game is listed as ‘Red Faction: Guerilla Steam Edition’ and is on offer right now over at Steam.