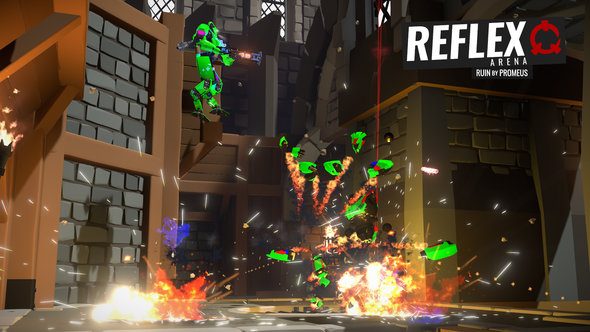 Reflex Arena, an FPS which has a lot of Quake III and Unreal Tournament in it’s DNA, is now out of early access. The twitchy shooter has spent over two years honing its systems and mechanics before properly landing on our hard drives.

﻿A little short on paper? Check out our list of the best free games for PC.

The title itself has been shown a lot of love by Australian developer Turbo Pixel Studios, having received over 30 updates over the last couple of years. One of the biggest draws up until now has been the huge number of community-made maps that are available to bounce around on, numbering in the hundreds. But there is a lot more to come from this plucky little throwback to the dial-up age, much of which shipped along with the full release version.

Players are now able to take on AI-controlled bots in order to learn the game and hone their skills. Furthermore, competitive season one began on March 8, accompanied by a points system and leaderboard, so strap your competitive helmets on and grab some rockets. This new ranked system allows players to earn points in matches against each other. These can then be used as currency to purchase items and personalise your character.

Turbo Pixel lead programmer Phil Brown said, “Arena shooters were a vital part of what made me love games in the first place—that pure sense of skill vs skill, that blinding speed and twitch-response gameplay. We felt like this was a style of game that needed to stage a comeback, keeping everything that made those games great but in our own powerful 3D engine and driven by smart online features. It’s a perfect marriage of old-school and cutting edge, and we couldn’t be prouder of it.”

Reflex Arena is currently enjoying a flash sale on Steam and can be picked up for $8.49/£5.94.