The original Reigns was an inspired game that adapted the swiping system of dating app Tinder into a monarchy simulator. Swipe left to execute your cousin, right to let them live. Reigns: Game of Thrones has the same decision swiping mechanics as the original game, but now you’re fighting for control of the Iron Throne and dominance over Westeros.

You are a ruler burdened with a number of decisions that affect your kingdom, when faced with a choice, you have just two options: swiping left for one option and right for the other (or, for us PC players, clicking and dragging in the direction of your decision).

As well as navigating the alliances and conflicts of George R. R Martin’s world, you must also balance the four factions of your kingdom; the church, the people, the army, and the treasury – which in this Game of Thrones edition is the Iron Bank. Keeping the support for these factions balanced is of the highest importance, if one of them gets too powerful or too weak you’ll meet a bloody end. In this regard, thats what makes Game of Thrones the perfect game for a Reigns adaptation, we get to decide the tricky fates of the kingdom where death is just one swipe away.

If you played the original Reigns then a significant addition in this edition is the threat of white walkers. You now have to decide how to deal with the army of the dead descending through the northern kingdoms whilst simultaneously navigating the alliances and conflicts of Westeros, and if you’re familiar with the series, these relationships are a tad complicated. Reigns: Game of Thrones keeps the simplicity of the original Reigns game but makes you feel like you’re part of the plans and schemes of the realm. Constantly trying to outwit the other characters makes you feel like a powerful piece on the chessboard of Westeros. 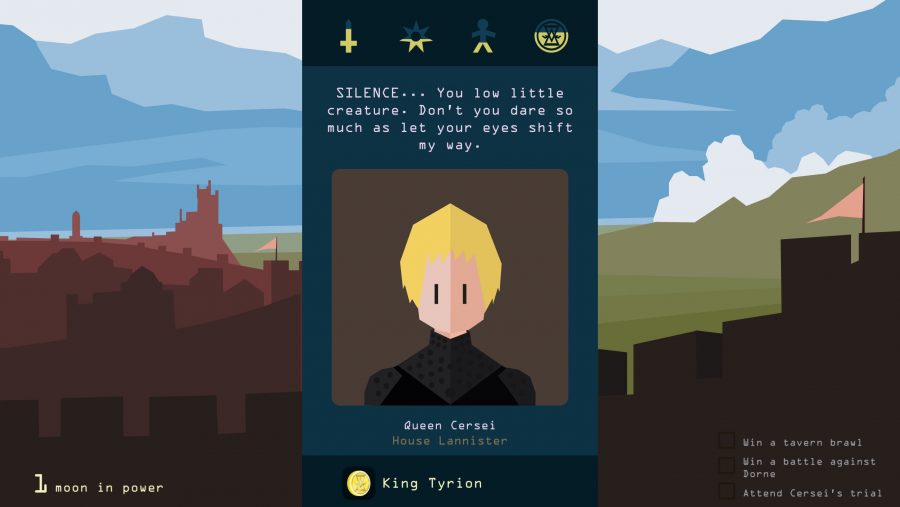 You start the game playing as the Breaker of Chains – Mother of Dragons herself – Daenerys Targaryen (you didn’t really expect me to type out her full title did you?). As you play through the game you’re able to fill the shoes of Tyrion Lannister, Arya Stark, Jon Snow, and more fan favourites.

After unlocking Cersei I was brutal and unforgiving in my reign, executing anyone who got in my way

There’s a total of nine playable starting characters that you slowly unlock but you’ll be seeing many more familiar faces throughout your campaign. It’ll help you realise just how many iconic characters Game of Thrones has.

The game spans the time period that the TV series has just covered – so yes, hello, spoilers incoming – with winter finally arriving and the white walkers slowly but surely approaching. However, due to all the decision making you’ll be doing the game also has a number of scenarios and parallel storylines. What would happen if Arya Stark killed Cersei and then face changed to impersonate her on the throne? You can find out. There are lots of scenarios like this for fans of the series to enjoy. Fancy unleashing Drogon to incinerate armies at every opportunity you get? Carry on. I’d imagine it’s plenty of fun even if you don’t watch the show.

Where Reigns: Game of Thrones really indulges your fandom is in roleplaying. You get to really explore each of the main character’s complex personalities and personal histories if you commit. After unlocking my favourite character from the series, Cersei Lannister, I started playing ruthlessly. I was brutal and unforgiving in my reign, executing anyone who got in my way, I wanted to imitate the Cersei I saw from the series. 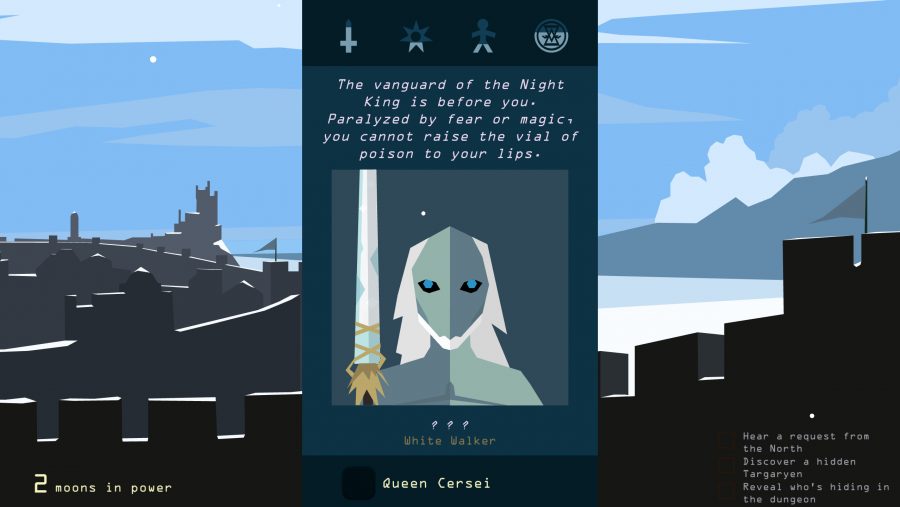 More than a card game

For fans of fantasy card games, CD Projekt Red has taken The Witcher 3’s in-game card game, Gwent, and has expanded it into a fully fleshed out RPG. Find out what we thought about this adaptation of one of the best card games on PC.

But there was a quiet moment in Cersei’s chambers when a servant who wanted to know more about Cersei’s children asked about Joffrey. It’s like she wanted to lose her head. But the cards started to show what Cersei was thinking, and I ended up choosing options where she started talking, almost to herself, about her feelings of regret about spoiling Joffrey and not disciplining him enough. She treated him like that because he was her first born son and she loved him deeply not knowing of the monster he would become. These moments took me completely surprise.

Reigns’s cards get right inside the head of the characters. It gives you insight into these big personalities that the show isn’t quite able to pull off. When playing as Jamie Lannister you’ll find he’s constantly stealing glances at his golden hand, and is embarrassed about training with his left hand, thinking about how it looks to his comrades.

You don’t need Melisandre’s visions to foresee that Game of Thrones fits into the Reigns games, its bloody topic matter and strategic gameplay match the themes of the game perfectly. It’s not only a new take on the card game but it’s also a total reinvention of the immensely popular fantasy series.