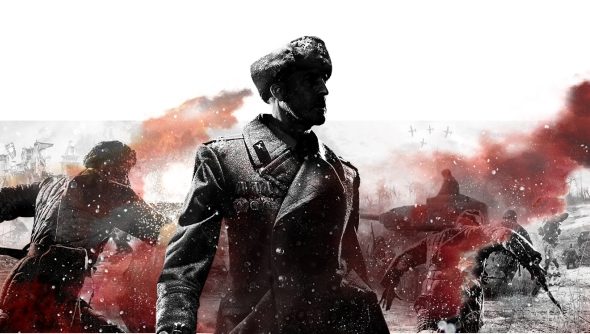 Calling your studio Relic must have been a good idea for bright young things fifteen years ago. Now, with the strategy genre having lost sexy and their once-inspiring 3D space delight Homeworld having been abandoned in favour of Yet Another World War II Game, you might imagine the Relic team were feeling like, well, relics. But Quinn Duffy, a 14-year veteran designer, displays only mild ennui as he demonstrates Company of Heroes 2.

Of course, the first Company of Heroes wasn’t differentiated by its setting – World War II strategy games are about as original as Werthers – but rather by its unparalleled polish of appearance, mechanics and multiplayer, and by its focus on the personal stories of the soldiers, like Saving Private Ryan, on small unit combat, destruction and directional cover / armour. It’s also unique in that it still has huge numbers playing; they had 245,000 unique players in March 2012. Company of Heroes 2, of course, can’t be differentiated so easily by those elements so, as Duffy puts it, the new game is set in the “forgotten theatre of World War II.” Where’s that? Burma? Manchuria? Finland? Algeria? Corfu? OH. No, he means the Eastern Front. And by forgotten, he means forgotten by Americans. Because Europeans haven’t forgotten – and, specifically, the Russians haven’t forgotten. You can tell by how little they’ve forgotten by the brutalist Men of War series, which has been set in exactly this area and which Company of Heroes 2 is going head-to-head with.
To fend off the might of the Russian’s ridiculously in-depth war machine, Relic are deploying a new war asset to the field; the Essence Engine 3, which can handle all sorts of new junk, from fresh renderers to a new audio engine to a new presentation layer. They showed it off with some men tramping through the snow, vaulting fences and a tank sliding around on the ice. We thought we saw a touch of dark outlines at the further zooms, to allow troops to stand out against the snow. Anyway, players get to play as Red Army troops attempting to free Mother Russia, with the story told through the eyes of an ex-soldier who returns to the front as a war correspeondent. Given the ludicrously high mortality rate amongst the troops (1 in 7 Russians died), this allows your character to survive the war, and access all layers of the army.
Moving from Company of Heroes’ dramatically asymmetric armies, the core armies in CoH2 are a new army of soviets which works on the principle, as Duffy quotes Stalin, of “quantity having a quality all of its own.” The Germans, as in the previous game, are more nuanced, relying on technical superiority and mobile defenses. The level we saw was part of the Battles of Rzhev – otherwise known as the Rzhev Meatgrinder. A million Soviet soldiers died blocking the Germans resupplying the Siege of Stalingrad (which, thanks to that, failed and the Germany army was forced to surrender.)

Mostly, what we saw was familiar Company of Heroes stuff, emphasising the frailty of men under fire. Flamethrowers, artillery and machine guns made a mess of the small platoons that the Russian player kept pushing through the dense snow. There was no respite for them. Walking on the compacted snow of the roads, they were sitting ducks; pushing their way through drifts gave much more cover (still Company of Heroes’ masterstroke) but wasslow, tiring and had the threat of hidden mines.

As the Russian troops (quite reasonably)turned to flee, they were cut down on the orders of their own commissar. Stalin’s orders had meant that there was no longer the option to retreat for any Russian troops; if they didn’t die under fire from their comrades, they’d long for death as they fought in the penal battalions. A second attack against entrenched German lines was supported by a Su76 (the Suka or ‘little bitch’ – an open-topped tank much loathed by its crew), suppression from a Maxim machine gun, and smoke shells, which cut down all theranged troops’ line of sight. Quickly the Russian hordes pushed on, taking down the crew of an enemy tank which, like Men of War, could then be recovered and repaired by either side.

The German AI proved its worth, though, with a series of counter-attacks and flanking moves, making it very hard for the player to manage an effective offense. In riposte, aT-34 was sent forward, which sent the German infantry running with cannons and machine gun, before it too was taken down by an airstrike that flattened the entire landscape. While the game looks absolutely gorgeous, this setting is familiar stuff to Men of War gamers or players of the first Call of Duty. We suspect that there will be a few newer RTS gamers who don’t know this region of the world, so the change of scene will be welcome for them. As with the first game, though, what will make it succeed or fail is the multiplayer- and we haven’t seen that yet.