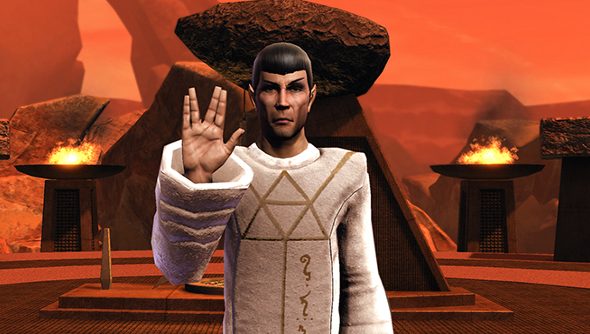 Leonard Nimoy passed away today, and you probably already know that, because the internet is now filled with tributes to the man, most of them Spock-themed. This isn’t something I’d normally write about, because the passing of a great actor isn’t really PC news. He lent his voice to a few games, however, including Star Trek Online and Civilization IV. While game voice work was only an infinitesimal part of his long acting career, it was always memorable.

Nimoy was one of the most memorable things about Civ IV, narrating the introduction and every technology quote in the base game. And conveniently, there’s a video that collects all of those quotes, recited in his commanding voice. I’ve been listening to it a lot.

His voice was able to add gravitas even when he was reading out hundreds of little historical quotes.

And here’s the Civ IV introduction.

Over in Star Trek Online, players have been travelling to Vulcan to pay their respects, as well.

He’s even being remembered in games he wasn’t in.

Outside of PC games, he worked on a few titles, but most striking – and strange – was Seaman. It was a bizarre digital pet with the face of a man and the voice of Leonard Nimoy on the Dreamcast. Last year, Devolver Digital was even testing the waters in regards to a new game.

He’ll be missed in games as well as on screen.