Well, this is a surprise. I first played Remnant: From the Ashes at Gamescom last year and if I had to sum up my impression in a word, it would be ‘grey’. Drab grey colour palette, sloppy grey combat, bored grey emotions. This was disappointing, given that developer Gunfire Games has plenty of talent (formed ‘from the ashes’ of Vigil Games after THQ’s bankruptcy in 2012, many of its staff worked on Darksiders I and II), but I wrote it off as another second-rate Dark Souls imitation and moved on.

It’s more than that, as over four hours on a much-improved build has shown me. I play on two of the game’s four worlds: I first visit Earth and the surely ironically-named city of Fairview, the dreary grey urban sprawl I played last year. Improved textures and lighting have added more detail and contrast, such that all the tarmac, concrete, and sewers don’t feel quite so lifeless as they did before.

The second stage is located on a planet called Rhom, and it could hardly be a greater contrast: an alien sun blazes ominously over undulating golden sand dunes, fizzing green pools of radioactive death gather in deep valleys, and shambling ghouls haunt ruins reminiscent of Mexican casas.

In one dungeon on Rhom, those casas are scattered over the cliffs around a gorge. Enemy snipers take potshots from windows while attack dogs rush me and strange shamans throw beams of radiation. The mix of ranges, elevations, and enemy behaviours means combat has a lot of potential depth and breadth, and even in my short time with the game I experience a lot of moods. 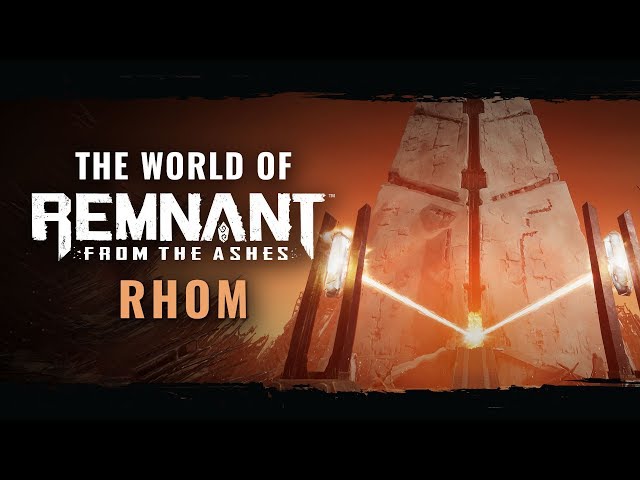 My solo run through this area as a sniper build is meticulous and wary, involving lots of sneaking, liberal use of a weapon mod that grants wall-hacks, and headshots for all. These are made especially satisfying by Remnant’s many degrees of damage: grey numbers indicate you’ve hit armour, white indicates normal damage, yellow means you’ve hit a weak spot, and red is for when you score the most severe critical hit possible. Remnant’s checkpoints are also spaced such that running out of bullets is a definite risk if you’re trigger-happy, so when you kill efficiently, you feel doubly smug.

On my solo run through Rhom I am repeatedly ended by an ogre that soaks up bullets like Sinatra did martinis. We make it to the boss when playing in co-op, however: a so-called ‘sentinel’ named Raze. Armoured except when attacking, I dodge suicide-bombing mobs to fill its face with a cocktail of shotgun blasts while dodging radioactive pools.

After sniping several enemies while sneaking, I unlock the Shadow Walker trait, which reduces enemy awareness. Upon gaining an experience level or picking up a Tome of Knowledge, I gain a point to invest in one of the trait trees I’ve unlocked. Thus, your build is both organic and manual: the trees you unlock are determined by how you play, but then the ones you develop are up to you.

I later try the same area as a melee tank build in co-op mode – Remnant supports up to three players working together – and the mood is very different. My team runs ahead, aggroing several enemies at once, and we sprint from cover to cover shrieking into our mics and taking opportunistic kills as they arise. I score most of mine with a potent shotgun or a fat hammer – it swings slower than the sniper’s rusty cleaver, but deals far more damage. 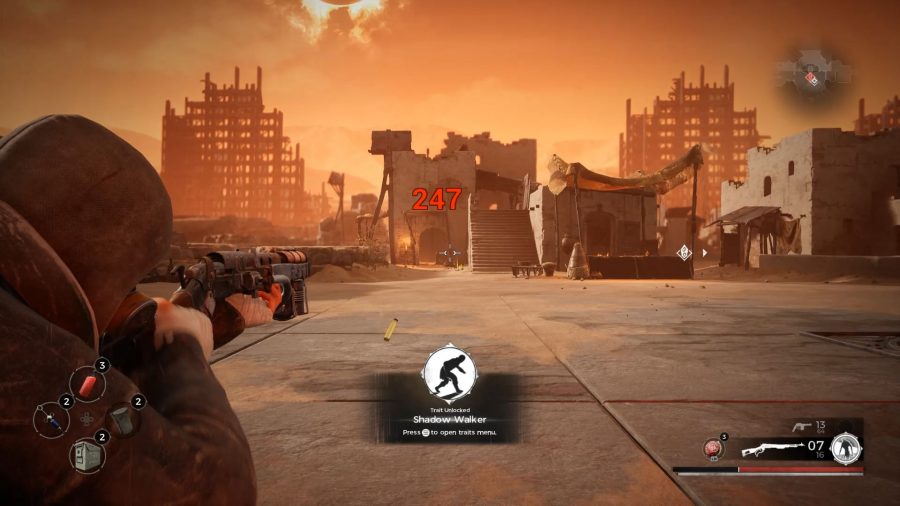 Remnant bills itself as a challenging game, and you’ll be punished for sloppiness. When you die you’ll respawn at the last checkpoint, as will all the enemies you’ve killed. Your reserve ammo and dragon hearts – a quick-healing item that’s basically a Dark Souls Estus flask – are replenished, but other consumables are not. These include bandages that cure the health-sapping ‘bleed’ status, and ammo boxes that can refresh your reserves if you run dry mid-dungeon. Most status effects also persist, so if you’ve run out of the appropriate healing item, you’ll have to sit and take it.

It’s a bit of a pain, but without an equivalent of Dark Souls’ bloodstain system, I do feel less invested in each run through a level. ‘Bleed’ also expires over time, so after dying I simply wait out the effects and then used the checkpoint manually to heal myself. It’s the logical move, yet creates an annoying pocket of downtime. 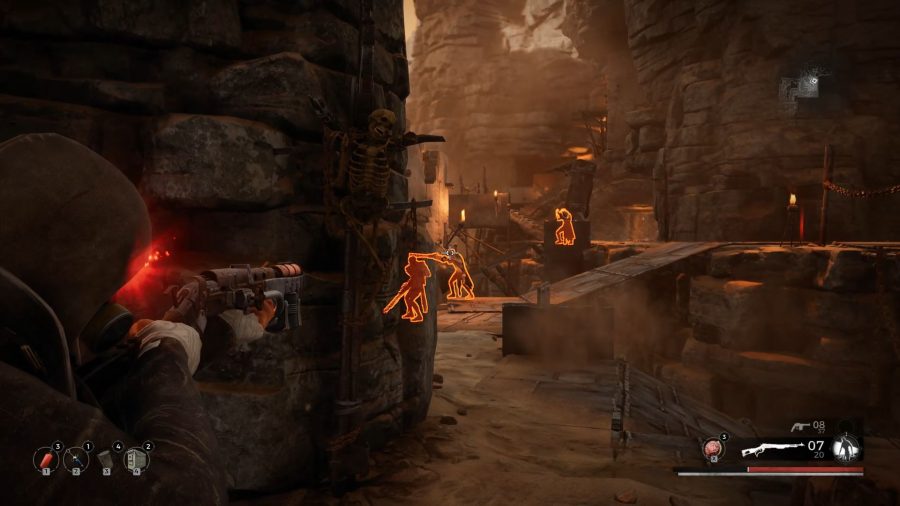 Still, I really enjoy the interplay between Remnant’s environments and its combat, which is all the more impressive when one considers that these levels haven’t been designed by hand. Each dungeon is dynamically generated from a number of tiles, as are its objectives, NPCs, bosses, and mix of enemies. If you’ve ever played Bloodborne – still the best reason to complement your essential PC with an optional PS4 – then Remnant is basically a series of chalice dungeons. Remnant’s dungeons are much more robust and intricate, and could well prove robust enough to sustain a full playthrough, but they can’t wholly disguise their own artifice.

On Earth, I teleport from the hub area – Ward 13, where you’ll shop, chat to NPCs, upgrade your gear, and so on – to Fairview, which is a kind of overworld. Map restrictions and a quest marker funnel me towards a manhole, and I descend into one of these dynamic dungeons. I clear it and surface elsewhere in Fairview, where I have new paths onward, and can also open a shortcut to where I was previously. 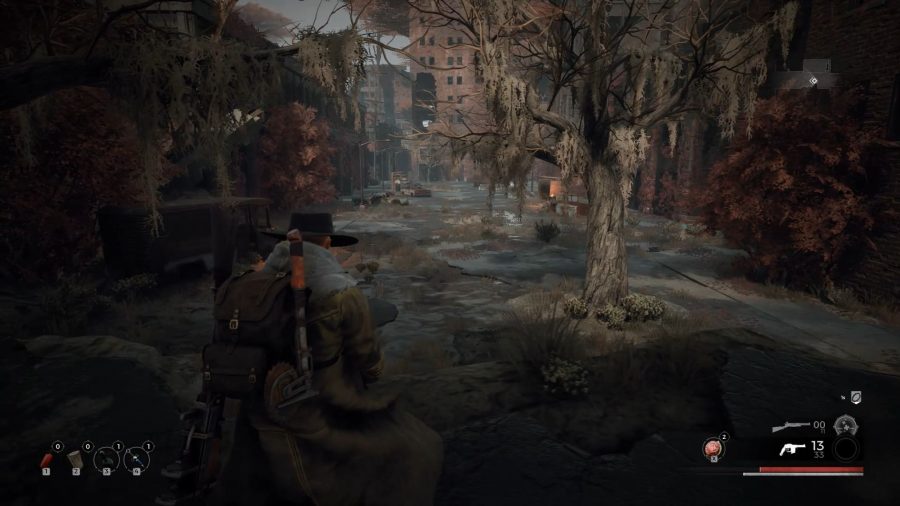 It appears as though the whole game will follow roughly this format: clear a series of dungeons to progress through each overworld, with higher-level, scripted plot points at key stages of progress.

All well and good, but it’s here that one of my few serious concerns with Remnant remains. I’ve no idea what to do or why until I enter a dungeon and learn that, for instance, I have to kill a couple of trees, or a boss, or some other objective plucked randomly from a list when I enter. The tile sets in these dungeons include identical entrances and exits, which creates a sense of déja vu when exploring. Combined with some wondrously esoteric lore – a conversation with some kind of witch was like a confusing shower in proper nouns – I felt thoroughly disoriented with respect to my place in the world and the story.

But I’ve only played a few hours; it’s possible that everything will come together in the context of the game’s overarching plot. That’s a prospect that genuinely excites me – the gradual coalescence of Dark Souls’s opaque world and lore is wonderful to experience, and if Gunfire can pull it off, it’ll be especially impressive given how barmy everything is so far. It’s also worth noting that dynamic or procedural generation has a fine heritage in roguelike dungeon crawlers, so if you’re a fan of such games, it probably won’t matter either way. It just jars a bit if you’re expecting something with Dark Souls’s elegance.

Even then, though, there’s plenty else of interest going on in Remnant. Fans of ARPGs, third-person action games, and esoteric lore – or really, anyone who wishes Dark Souls had guns – should keep following it, and look out for reviews around its release on August 16.