How would you survive a zombie outbreak? Barricade yourself in a pub and wait for it all to blow over, or raid a supermarket for supplies, or even flee to the wilderness to start again? You have a plan, don’t you? Everyone has a plan.

Capcom’s Resident Evil 2 remake provides the perfect opportunity to see what could happen if you don’t plan for the zombie apocalypse. As with the 1998 original, it tells the story of rookie police officer and a college student caught at the forefront of an undead outbreak.

It’s an iconic piece of zombie entertainment that has led to several sequels and film adaptations, not to mention all the undead fiction it’s inspired. We even spoke to some horror film producers about Resident Evil 2‘s ability to scare, recently. But the game’s initial release was as remarkable for its depiction of police officers as it was for its shambling living dead, and that aspect has been much less appreciated. To find out exactly what it would be like to be a cop if the dead suddenly started coming back to eat our faces, I asked one. And then I went and found a paramedic, too. How would these professionals handle the situation?

One of the most memorable aspects of Resident Evil 2 is the police station. Unlike the television-typical HQ that’s made with glass walls and filled with bad coffee, Raccoon City PD gets its own claustrophobic gothic building stuffed with locked doors, secret passages, and zombies.

Funnily enough, that’s not the norm. Police Constable Jon Brown has seen the inside of more stations than most law-abiding citizens and says that in real-life they tend to look “surprisingly a lot like a normal office, I suppose.” But that doesn’t mean that the Raccoon City police station has less basis in reality than the zombies, as Officer Brown explains. 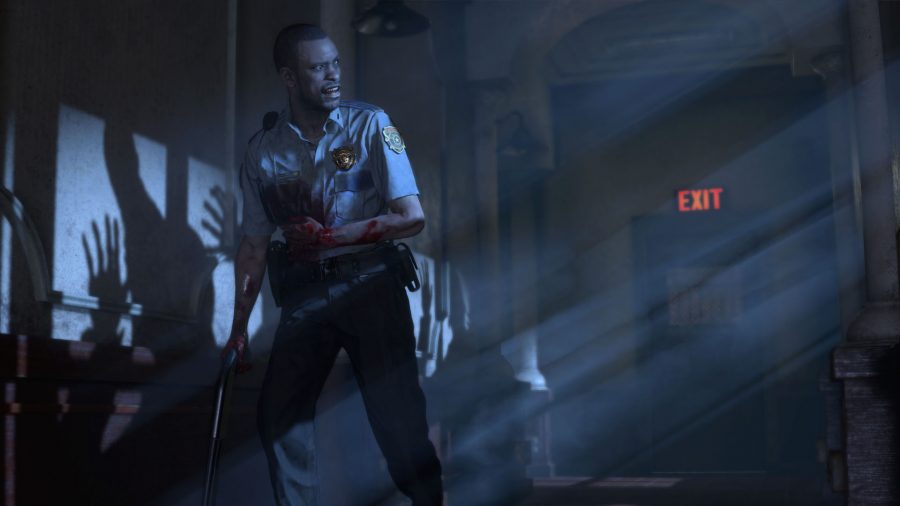 “Rural stations are different,” he says. “They just look like big houses. They’re often adapted on the inside and can be confusing, with a lot of winding corridors that take you to places you aren’t sure where.”

The lore behind Resident Evil 2’s station, a converted art museum, might not be so improbable after all. But surely the station itself, lined by creepy artwork on the walls, puzzle locks that block your way, and even the occasional secret passage, can’t be true to life? “To be honest the rural stations probably do have some old suits of armour or something stashed away somewhere,” Brown says. “I haven’t found any secret passages though.”

As for puzzles, Officer Brown has found plenty of those in his own station. “It’s a bit of a maze,” he says. “My keycard only gets me through certain doors so there’s a bit of red keycard/yellow keycard thing going on, although I don’t recall seeing any puzzle locks around the place. But if you aren’t familiar with the building, I could see it being a bit of a puzzle.”

Unusually for a police station, Raccoon City’s has taken a lot of structural damage. As the player arrives, a helicopter crashes headlong into the side of the building while trying to rescue an officer from the rooftop. Is this the kind of operation police vehicles would ordinarily conduct?

You might find it strange that Leon arrives to his first day on the job with all his body armour and equipment. But Officer Brown remembers his first day as being quite similar, minus the zombies. “On my first day I had everything with me when I arrived too. You actually get your shiny new kit from the head office before you start, not at the station,” he says.

“Police helicopters aren’t winch fitted so the only way to pick somebody up would be to land. If you did have a winch capable aircraft then you could definitely do an awesome Bond-style pick up if the weather permitted, but it seems like a pretty stupid idea given the circumstances.”

Most of the rest of the damage done to Raccoon City’s station is caused by Mr. X, who arrives slightly more successfully by helicopter. But rather than riding inside the vehicle like a normal assassin, he is deployed via a canister suspended underneath, which Maxwell has serious concerns about.

“Helicopters have a very specific flight profile and centre of gravity is an important factor in that,” he explains. “Before each flight the payload and its distribution are worked out to ensure profiles can be maintained. If you were to drop a large item from the air you would destabilise the aircraft. If you were insistent on the whole idea then you would need a really large aircraft, like a Chinook, and even they generally have the underslung load set on the ground before detaching.”

Read more: Cower before the best horror games on PC

Mr. X’s mission is to kill any surviving police officers, which makes his dramatic arrival even more ridiculous given how few police officers are alive by the time he smashes through the ceiling. One of the only cops left standing is central character Leon Kennedy, and it’s his first day on the job. But while the station might not be as completely unbelievable as first imagined, Leon probably is. 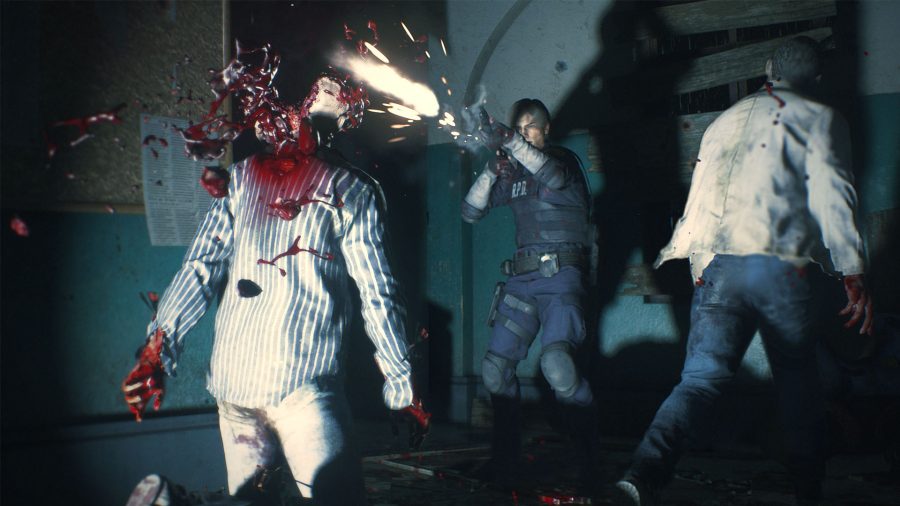 Before arriving at the station, Leon discovers a body on the road as he heads to work, and then almost immediately fires into an approaching crowd. According to Officer Brown, that’s an “extremely brave thing to do on your first day! Those people could be having a medical episode, or it could just be club kicking-out time. I don’t think I would have even drawn my baton in that situation.”

Where Brown and Leon do see eye to eye is in not taking unnecessary risks. Brown would not attempt to fight a zombie if it could be avoided safely, but does admit that “as a police officer, I can’t just run away from danger.”

“I’m not sure my PAVA spray would do much to a zombie, but my vest would certainly be hard to bite through and our batons are pretty tough,” he says. “Normal cops could probably do fine with those against small, manageable numbers.”

What about the other branches of law enforcement? The UK has access to both riot-trained officers and armed response units. “With riot gear the biggest threat would be getting separated and crushed by the horde rather than eaten,” Brown theorises. “Their shields would be extremely useful against an unintelligent crowd. Armed officers are well trained at clearing buildings, but ammo would probably be an issue depending on how bad the zombie outbreak was before they deployed.” 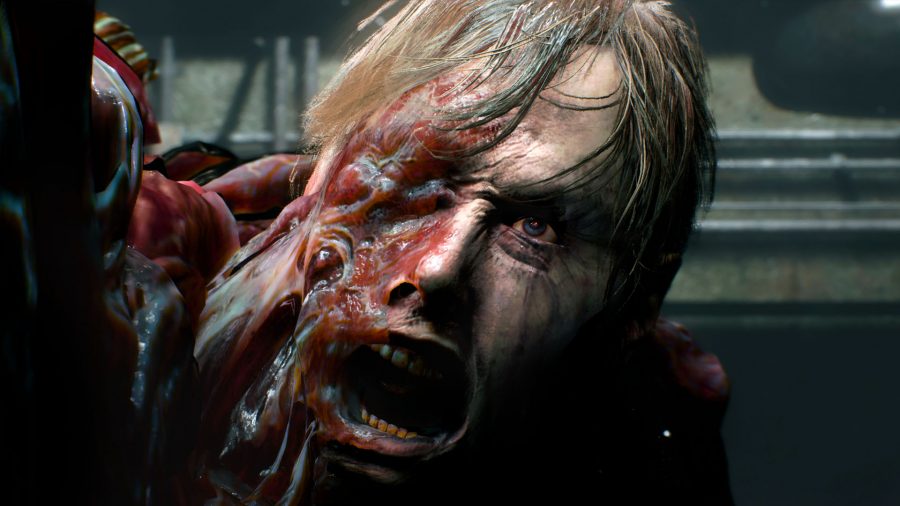 While Leon’s methods might not have met police standards, he did manage to survive the outbreak and escape the city, which is better than the rest of his colleagues. Would the police, and other emergency services, collapse so quickly to a zombie plague? Officer Brown isn’t altogether optimistic, knowing all too well that “there just aren’t enough cops or emergency services to deal with things as they are, without zombies. You throw in a mysterious infection and spreading violence and I think we’d lose it pretty quickly.”

Related: Feast on the human tragedies at the heart of Resident Evil

Maxwell, by contrast, thinks that Resident Evil 2 doesn’t give the emergency services enough credit. “I’m sorry to be a killjoy but we’d eradicate it pretty quickly,” he says. “Nature has been fucking us over more than any man-made product for a long time. Ebola, for example, is arguably more contagious than this zombie virus as it can be transferred from handling contaminated linen! But while Ebola outbreaks have killed thousands, we’ve managed with containment and stupidly brave clinicians to ensure the virus transfer is stopped in its tracks.”

Despite the budgetary issues, Brown thinks that if we could “identify it quick enough and get in public order units with full body armour, batons, and shields, we’d probably end it pretty quickly.” While Raccoon City and Resident Evil 2 might have bad cops, bad pilots, and bad luck, it seems the most unrealistic part of its portrayal of post-zombie policing is just how bad the situation would get.