The Tyrant is coming! Huge, square shoulders squeeze through doorways. Heavy boots split floorboards as they stomp to a relentless beat. Doom… doom… doom. Fists will fly into faces, crashing with horrendous impact, hurling spit and teeth and blood through the air. Such might! You better run. Here he comes – a seven foot tall oblong of fright.

For all the efforts that have been made to ensure the Resident Evil 2 remake looks better and runs smoother than the original, there’s one rigidity that has mercifully been left in. In the 1998 game, the Tyrant in a trenchcoat – otherwise known as Mr. X – is right-angled and robotic. He’s a kid’s drawing of a muscle man: all sharp corners and taut limbs, essentially a walking fridge freezer, massive in size and capable of punching through solid walls. He doesn’t need to run or leap or dodge bullets as nothing can stop the Tyrant. He just marches up to you, and if you don’t move, you die. The remake changes none of this.

I first encounter the Tyrant while playing as Ada, who’s wearing the red dress fans will recognise, strutting through the wet muck of Raccoon City’s sewers in high heels. Ada’s as fierce and in charge as she should be in the remake – who else could turn streams of sewage into a high fashion catwalk? It’s not all retreading old ground, though, as Ada has a hacking tool this time round and can use it to bypass certain barriers throughout the underworld. This proves difficult, as to hack I must keep my aim steady on a distant target while the Tyrant is in dogged pursuit. How Ada manages to do it all while contending with five-inch-high footwear is beyond me.

You get to be Ada intermittently as you play through rookie policeman (and champion of the curtain fringe) Leon Kennedy’s side of the Resident Evil 2 story. She’s one of many icons of the 1998 original that have been reimagined for the remake. Others include the giant alligator, the licker that jumps at you through a one-way mirror, and Marvin the unfortunate zombie cop – who I regretfully shot so many times in the face that his whole left cheek blew open. 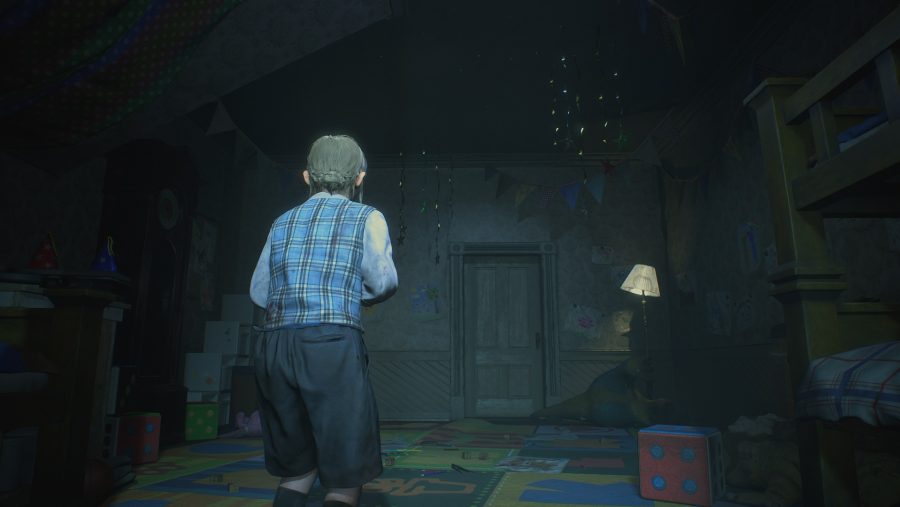 There are completely new sights to look out for too, such as the Raccoon City orphanage, which is where you get to play as Sherry Birkin later in the game. But the wretch that stands out most in my preview is the despicable police chief Brian Irons. He’s particularly memorable due to Capcom putting his whole disgusting personality on display. Warning: it’s about to get ugly.

I first meet Irons in an underground car park while playing as Resident Evil 2’s second protagonist, Claire Redfield. Within seconds of his arrival, Irons kidnaps Claire’s companion, the 12-year-old Sherry, and runs off with her at gunpoint – blocking my pursuit by slamming down a metal shutter. This leaves Claire no choice but to search the nearby Raccoon City Police Station for a means to go after him. And this leads her through Irons’ repugnant office.

Irons has a particular interest in taxidermy and displays his trophies around his office so you can’t escape them no matter where you turn. As I enter his den I’m greeted by a raccoon posed on a varnished oak desk. Next to it are a brass bankers lamp and black leather executive chair, and to the left of that is an open-mouthed alligator’s head. Seeing these beasts frozen in death and time next to all the luxury furnishings is striking – especially as the plush leather and wood contrasts with the concrete utility halls I scrambled through beforehand. But then I find the taxidermy log. By reading it, the police chief’s stomach-churning desires start to leak out, infecting any appreciation of the immediate surroundings – once a sight of majesty, it becomes irreparably tainted.

The log entry for the Siberian tiger is particularly gruesome: “I nearly came when I sliced its yellow belly open and its warm guts spilled out. I still smell of wild beast. This is the life.” Clearly, this is a man of unconventional taste, and probably not anyone’s first choice as the person responsible for the safety of a whole city. But that’s not even the worst of it – it’s how Irons describes the female “pig” he acquires that causes the most alarm: “The specimen’s body is soft, sweet, and white all over. And it’s all mine. Forever.”

The levels of gore are raised with incredible detail in Resident Evil 2 due to the RE Engine and Capcom's mission to make zombies as horrifying as possible. Producer Tsuyoshi Kanda told us the idea is to create a "world of wetness and darkness." It's absolutely disgusting and we love it.

The taxidermy log states the “pig” was found in Raccoon City, which is a big hint as to what it probably is – a young woman, who in the original 1998 game Irons intended to turn into a work of taxidermy. More pressingly, under the circumstances it’s easy to imagine that Irons sees his latest snatch, Sherry, in the same lecherous way – a body to be killed, mutilated, and preserved with formaldehyde. His office suddenly appears as carnivorous as the diseased mouths outside.

Delving into such a twisted perversion of humanity shows that Capcom is infusing the Resident Evil 2 remake with the type of horror that elevated Resident Evil 7. It wasn’t just another creature feature – it was the cannibalistic Baker family that served as that game’s gruesome centrepiece, reminding us that humanity can be fouler than any nightmare creature. No matter how absurd that monstrous bayou got, those characters ensured the game kept one foot out of the water and planted in reality.

That marked an important turn for a series that had clearly run out of ideas. By Resident Evil 6, one stubborn villain had been resurrected several times, and every creature design seemed to be the result of the same question: what if a cemetery had sex with a tank? It seems the Resident Evil 2 remake will double down on Resident Evil 7’s more believable breed of horror. And it does this not only by redressing the game to a modern standard, but by more thoroughly exploring its major characters, letting you rifle through their personal spaces, and further bringing them to life in mo-capped cutsce– gah! No time to dawdle. Here he comes again! 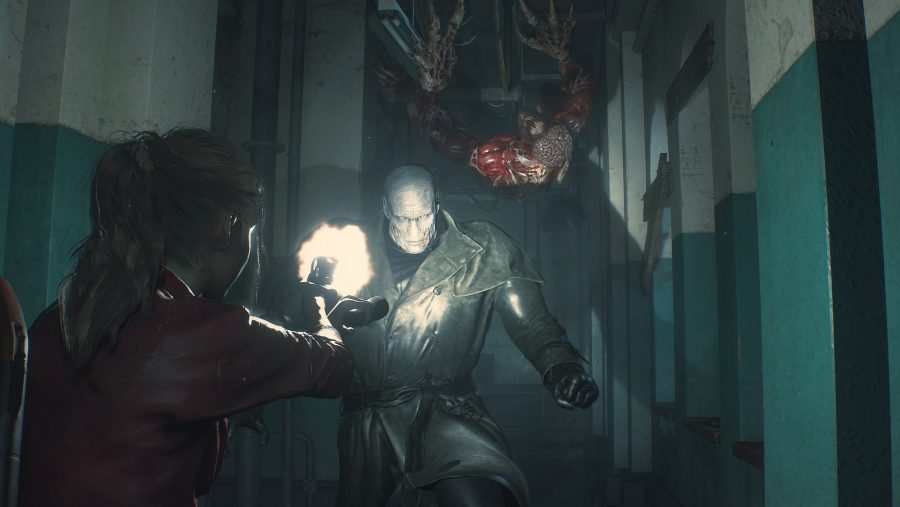 The Tyrant walks on, unwavering in his step, as if the grenade rounds I’m firing at him are but a light breeze licking at the unnatural cavities of his face. Even when on fire he keeps marching forwards. My second encounter with Mr. X is a harrowing battle that drags on for at least an hour as I die over and over – reappearing in front of typewriters as if given another chance to rewrite the story. It turns out Ada’s section is the least stressful time I’m to have with Bulletsponge Squarepants during the preview. Playing as Claire, I have to learn the layout of the dishevelled maze that is the Raccoon City Police Station, all while avoiding zombie teeth, licker claws, and the mutant mountain. There are puzzles to solve amid this too, many of which I learn afterwards don’t advance my progress, only giving me more ammo to rattle off into the walking brick wall.

The Tyrant does go down if you damage him enough, but it’s only a temporary relief – he’ll be back up again soon. The whole idea of this section is to keep you moving, panicking, running between pots of green herbs while clutching your wounds as if you’re suddenly the most devout vegan on the planet. There’s little in the way of ammo to help you, but you can board up windows to stop the dead flesh crawling in, and having a flashbang in your inventory gives you a second chance if the zeds do catch up – stuffing the phosphorus grenade in their mouth and kicking them away. Even then you barely get to take a breath. It’s stressful as hell, but that’s the whole point. This is pure survival horror and that’s what Resident Evil is all about. You should relish in the fright. Speaking of which – can you hear it? Here he comes again. Doom… doom… doom.