If the echoes of Resident Evil 2’s Tyrant – aka, Mr X – stomping around Raccoon City Police Department still send a chill through you, then encounters with Resident Evil 3’s Nemesis will reduce you to a nervous wreck.

Nemesis is faster than the Tyrant, can appear out of nowhere, and has tentacle appendages to snare you before you can make an escape. Oh, and he has a flamethrower. Sure, you can avoid his lunges with a quickstep, but getting the timing right while the hulking mutant is bearing down requires a level of calmness I am apparently incapable of.

I may only have had to deal with Nemesis a handful of times during a three hour hands-on preview of the Resident Evil 3 remake, but each encounter was unbearably stressful. Nemesis is fast enough to catch up to you, so running in a straight line doesn’t cut it. Occasionally, Nemesis will disappear for a brief moment, only to drop down in front of you and force you to take another route. The streets of Raccoon City are more open than the corridors of the police station, but Nemesis is agile enough to make these spaces feel just as claustrophobic.

At one point protagonist Jill Valentine elects to split from fellow survivor Carlos to draw Nemesis away from a train station. I still haven’t forgiven her for what she put me through during the ensuing chase sequence. 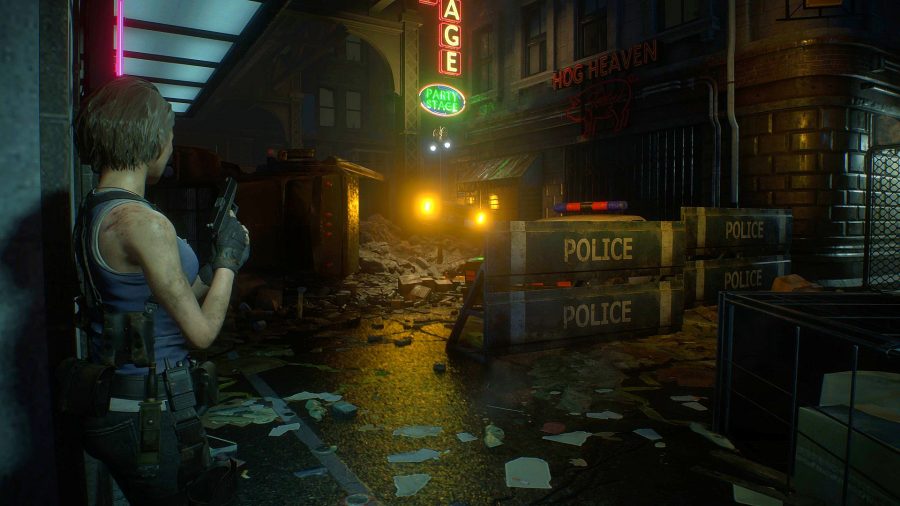 When Nemesis isn’t ruining your day, Resident Evil 3’s city street areas feel refreshingly open and vibrant. The outbreak is recent, so you’ll find most shops are still lit up, there are plenty of fires to illuminate the streets, and ample space to dodge zombies if you’re low on ammo. Of course, no matter how many zombies you avoid there are always more, ensuring there’s plenty of risk should you find yourself trapped in an alleyway. Thankfully, Raccoon City has an abundance of red explosive barrels and active generators near large puddles, so you can easily take out several undead with a couple of carefully placed shots.

confined spaces are where Resident Evil 3 unleashes its real shocks

You progress through the story in exactly the same way as the Resi 2 remake: complete basic puzzles, collect key items like bolt cutters and lock picks, and backtrack to open previously inaccessible areas. Standard zombies are unchanged too, so they’re still a joy to rip chunks from, gradually de-limb, and leave crawling in your wake. While it’s harder to shock players when they’re roaming around an open city street, Capcom has a few sneaky tricks up its sleeve to keep you on edge, like zombies crawling out from beneath cars to snatch at your ankles – I soon found myself stabbing every corpse in sight just to check how dead they really were. 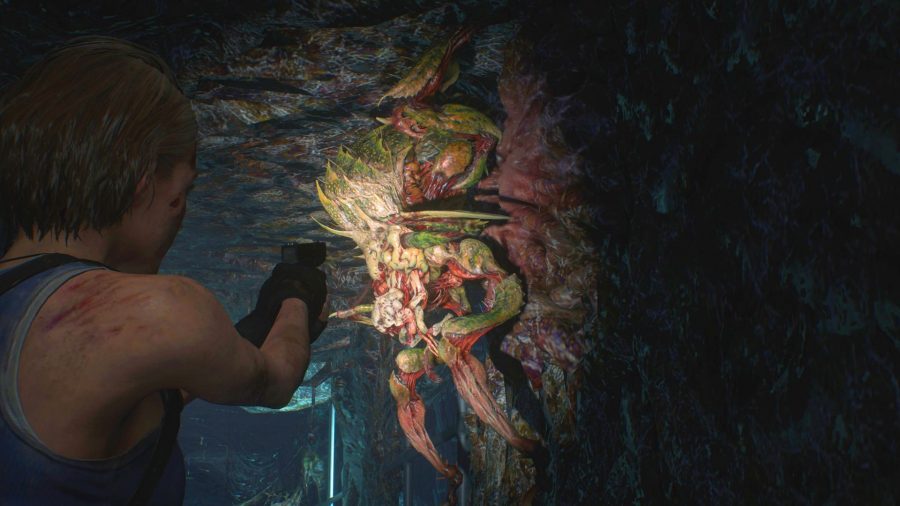 To ratchet up the tension, Capcom routinely turns you away from the relative comfort of the streets. In one instance, you have to venture into a labyrinthine power station to activate a series of generators. Fleshy, bilious pustules grow all over the hive-like walls, but they teem with something else, too. Spidery creatures crawl from floor to ceiling, seemingly made of nothing but goopy discharge and oh god please stop laying eggs down my throat. If one manages to get the jump on you, it forces a slimy appendage down your mouth and pumps eggs into your stomach. The cutscene is disturbing enough, but if you leave the infection untreated, Jill’s stomach explodes, sending larvae skittering in all directions.

Later on you find yourself in a sewer battling creatures that resemble the city’s flushed dead goldfish, resurrected and mutated to the size of grizzly bears, with jaws that open up like a grotesque flower in bloom. They’re sickly pale with the sticky sheen of exposed flesh, kind of like a giant, walking raw chicken breast that’s been out of the fridge for too long. These monstrosities are not exactly difficult to deal with – a shotgun blast to stun followed up with an incendiary grenade down the gullet – but they’re so horrifying to look at that you won’t relish the encounter. 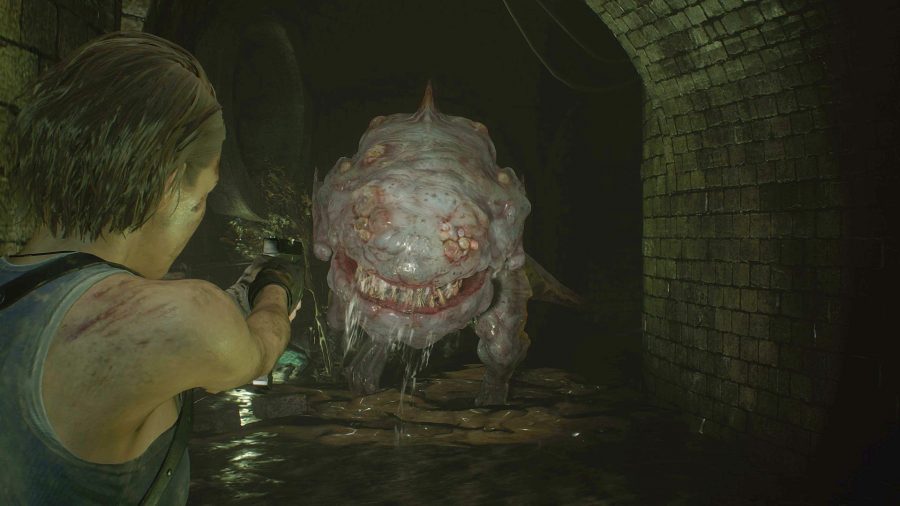 Whether you’re sloshing through the dank sewers executing mutant amphibians or trying to avoid guzzling a generous helping of spider eggs, these confined spaces are where Resident Evil 3 unleashes its real shocks. While the streets are by no means safe, finding yourself topside feels like coming up for air, and it does wonders for Resident Evil 3’s pacing and tension.

More like this: Here are the best horror games on PC

Capcom has very much followed the successful formula of Resident Evil 2, and that’s no bad thing, considering it’s one of the best zombie games in recent years. Some of the ghoulish new monstrosities help diversify combat, the environments feel more varied, and Nemesis manages to sow more chaos than the Tyrant – all good things. So if you considered Resi 2 the ideal remake then you won’t be let down in the slightest by Resi 3’s makeover.