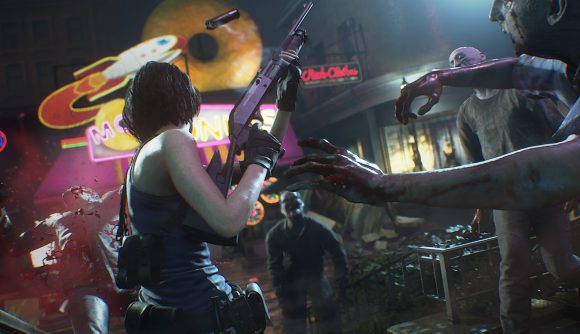 The Resident Evil 3 remake is official, and though we got a lovely new trailer to showcase the game’s modern look, it’s not quite the same as raw gameplay. To make the wait for the Resident Evil 3 release date a bit more bearable, Capcom has provided a ‘special developer message’ video, which includes a bit of straight gameplay footage.

The clip shows Jill Valentine running through Raccoon City streets, just as you’d expect from the early bits of RE3. It looks a lot like the excellent Resident Evil 2 remake, but there’s one additional detail fans have noted – the bit where Jill dodges out of the way of an incoming zombie attack.

We’ll have to wait and see exactly how it works, but it looks like a button press to trigger a quick juke – and that’s a notable bit of athleticism to have in a survival horror game. The original RE3 introduced a dodge mechanic with the old tank controls, though that was a timing-based parry tied to specific enemy attacks. This dodge appears to come out well before the zombie makes contact.

You can see the mechanic in action below. The gameplay starts at the 1:30 mark, and lasts for about 30 seconds.

Resident Evil 3 is scheduled to return on April 3, 2020. There are plenty of horror games to keep your days spooky in the meantime.