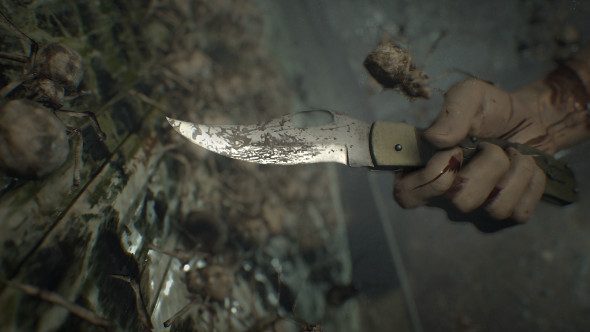 The tangential Resident Evil series has been an increasingly disillusioning experience for me. I was enamoured with original trilogy, and must be one of about eight people who didn’t greet the paradigm-shifting fourth entry with jubilation, but instead with a feeling that the good old days of creeping, claustrophobic dread – endemic to those fixed camera angles, pre-rendered backgrounds and tank controls – were coming to an end.

And end they did. Despite Capcom’s marketing machine reassuring horror veterans that things were going to be OK, that Resident Evil could be a survival horror and a co-op action game all at once, the series strayed in pursuit of attracting a wider audience. One that was content shooting hordes of zombies, mutants, whatever, without fear of ammo running out or not being able to find a typewriter to save their progress on. After a while, each time one of the Resi developers said that the next game would return to the series’ roots, I’d zone out as soon as I read a headline along the lines of “Resident Evil 5/Operation Raccoon City/6/That Other One will be a return to survival ho–”, the rest of the sentence turning into garbled static on the page.

Naturally, the same line was deployed on Resident Evil VII: ‘It’s a return to the series’ root-’ [static noise]. But with its completely overhauled style, I couldn’t suppress my curiosity. Will I be hurt again, I thought as I sat down to play a segment of the main game; a thought no doubt echoed by tens of thousands of fans of true, gruelling survival horror who’ve long since given up looking for it in the series that single-handedly created it. 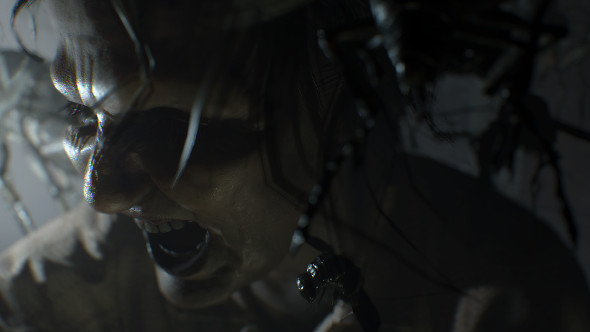 Now, after five hours of esoteric puzzle-solving, desperate ammo preservation and anxiously traversing murky corridors for fear of the next jump-scare (which is actually a tastefully rare occurrence), I, a long-time cynic of the series, am becoming a believer again – a Resident Believer, a Resident Believiler… never mind.

Because those five hours I spent with Resident Evil VII amounted to the most decidedly old-school survival horror experience I’ve had in years, evoking all those feelings of intrigue, fear and confusion by thoughtfully transposing them into the first-person perspective – the natural successor to the fixed angles and tank controls of yore.

The action events take place in a run-down rotted-wood compound of houses in the deep dark swamps of Louisiana (the same house featured in the PS4 demo, which PC players will get to indulge in from December 19). You control Ethan Winters, who’s searching for his wife Mia after she goes missing. In the hands-on, I wake up in an awkward dinner situation with the Baker family – formidable father Jack, his banshee wife Marguerite, and their menacingly giggly son Lucas. When the family leaves the table, I break myself free, and proceed with my escape. 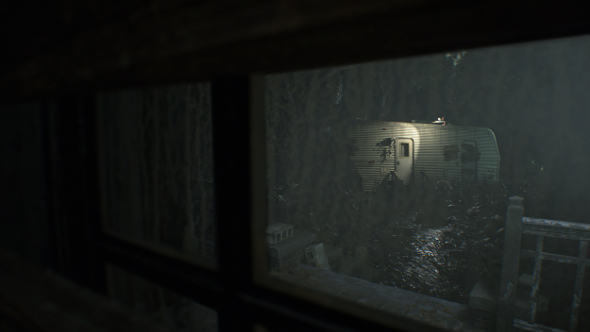 The way I go about this is classic Resident Evil: I spend more time searching rooms and examining items in search of crucial puzzle information than I do fighting (at a glance, I think there are less enemies here than in any other Resident Evil game). Running is always a better option than shooting – a lesson I ruefully learned when unloading a whole clip into Jack did little to stop his axe-wielding, murderous march towards me (which echoes the slow-moving menace of Resi 3’s Nemesis). I got away from him, but seven bullets worse off than I was before the encounter, which counts for a lot here.

There are countless moments that hark back to the Resi olden days with uncanny precision. The poorly lit corridors contain too many doors and windows for me to ever feel at ease, and I’m constantly anticipating a pair of zombie dogs or a Licker to crash in through the window, or some horror to come shuffling around the corner. It’s not long before my fears are justified, though the fact that something crashes through the wall instead of the window is a devilishly self-aware subversion of expectations. Even player movement feels deliberately cumbersome, channelling something of those clunky, panic-inducing tank controls of Resi 1-3; sprinting isn’t all that fast, there is no option to lean or snap to cover with the press of a button, and turning is tantalisingly slow on a gamepad (making me wonder whether playing with a snappy mouse and keyboard will nullify some of the horror). 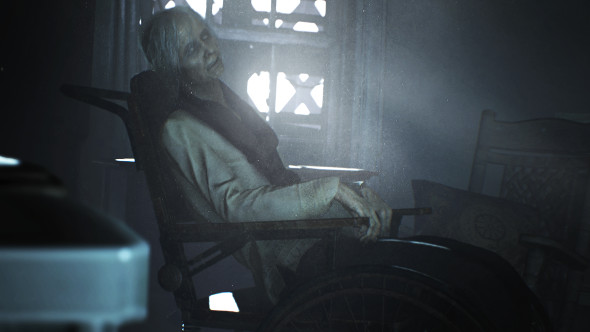 Resident Evil VII pays tribute to its origins not with irreverent winks at the camera, but by incorporating and modernising iconic elements from earlier entries. Remember those suspenseful loading screens between rooms where you watched a door opening in a black void, making you anxious that something would appear on the other side (and how terrifying it was that one time something did appear)? Here, you can open a door in two stages – first you open it a little to peek into the room, then you move forward a bit more to open it fully. Much like the loading screens in the original trilogy, it builds suspense by restricting your view and prolonging the process of stepping from one space into another. Naturally, the game exploits this occasionally for some fine jump-scares.

Perhaps my favourite nod to the classic Resident Evils is the save system, whereby you use voice recorders in safe rooms to save your progress. In such a universally hostile environment, little sanctuaries of respite are necessary to offer players that momentary relief, and pause to reflect on their exploits having made it to the next juncture in the game (just think about the warm, reassuring glow of a Dark Souls bonfire). I was grateful each time I came upon these cosy spaces, with their eerie, distorted yet comforting music, item chests and – in one case – bird cages where you exchange antiquated coins for items.

The house is wonderfully detailed – from the branding of the ruined thermal underlay drooping under the floorboards, to the stack of board games reminding you that this creaking nightmare mansion was once a site of homely domesticity. At the same time, it’s a labyrinth of puzzles and confusing corridors that has a Heart of Darkness feel – getting more and more warped the deeper you go. Even before thing get really creepy, there are unsettling elements that seem to pre-date things going wrong in the house, such as the portraits of people with white bags over their heads. All of it creates a feeling that there are things going on here far beyond your understanding.

The puzzles are another polished throwback, usually involving special keys which open certain kinds of doors, draining baths of black gunk to find clues, or trying to find something to replace the shotgun that you take off a statue, which causes you to get locked in the room. These puzzles aren’t the bonkers convolutions of the original games, but are still esoteric enough that I found myself wandering quite aimlessly for a good five minutes at one point in search of a final puzzle piece, before remembering that maps actually matter here; frustrating, sure, but it was nice not to have my hand held. 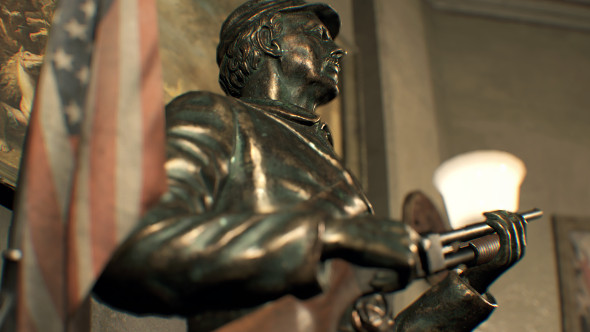 If you read a note hinting at where you can find a puzzle piece, you don’t instantly get a marker telling you where to go, but need to check the map and go to whatever room is mentioned in the note. Likewise, you’re never told what item you should use where, and each time you use an inventory item on something in the environment, you need to select it yourself. These little touches make all your actions feel refreshingly manual, forcing you to join the dots yourself. When I completed my session, I realised that I hadn’t explored all the house’s secrets and locked rooms, and indeed that I missed out on a powerful weapon as a result. Keen perception is rewarded, though is by no means mandatory.

The great irony is that all of this old-school sensibility is dependent on the all-new engine. To tap into that same fear we felt all those years ago and to convert those classic scares into a modern game, Capcom had to look at what defines survival horror today. Based on my experience, they seem to have grasped it brilliantly, and the confidence in design is reflected in some of the neat new ideas they’ve thrown in, such as a sequence where you play a videotape recorded by Ethan’s wife Mia, who you then control in the recording to learn her fate as well as a crucial lesson about how to solve one of the puzzles. 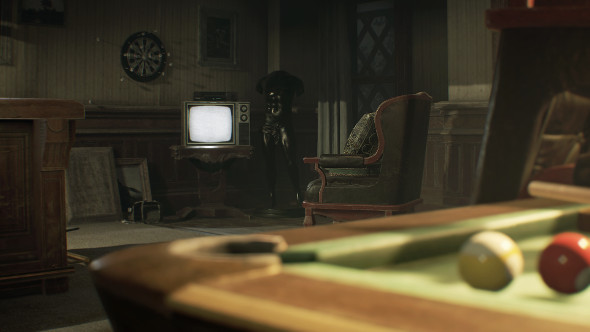 Some of the gaming community have been quick to compare this to the Silent Hills PT demo, but this is misguided, in the same way that it would’ve been facile to have called Silent Hill a rip-off of Resident Evil 1 or 2. Where PT was a surrealist experience teetering on the brink of nightmare and reality (as per Silent Hill in general), Resident Evil VII has all the spirit of old-school Resident Evil; it’s creepy and brooding for long segments, but still finds room for moments of humour and flamboyance – such as the absurd bit of text where a switch is behind a panel that’s been flimsily taped shut, and you inexplicably “can’t open it with your hands”, or the boss fights which are as grindhouse-silly as they are horrifying (and pretty much wipe out your ammo and health supplies, leaving you feeling vulnerable for the next section of the game despite your hard-fought victory).

The theme of home has a profound role in Resident Evil. The series itself owes a tremendous amount to NES classic Sweet Home, and in the Spencer Mansion of Resident Evil it applied the same emphasis. The series stems from the classic horror trope of an insidious otherworldly presence violating the domestic space. It’s right there in the name, yet it’s been ignored for most of the series’ lifespan. Resident Evil VII is finally bringing the series home, inspired as much by the survival horror revival of recent years as by its roots. As with Alien: Isolation, I’m sure this will prove divisive as all semblance of power fantasy is stripped from the formula, leaving trigger-happy gunners unsatiated. But those people have had their fun, and if the rest of the game continues in the varicose vein of the hands-on I experienced, old-timers can finally look forward to a worthy successor to the trilogy that introduced so many of us to the power of horror in video-games.