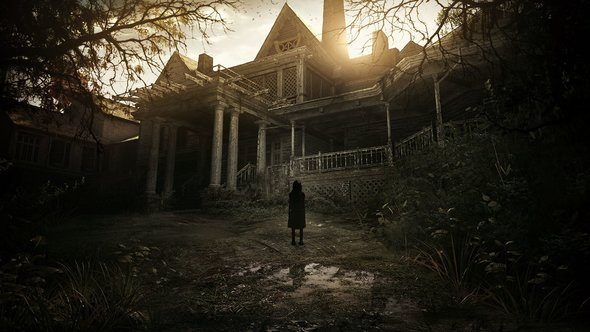 Resident Evil 7 wasn’t always going to be quite as ambitious as it is, according to a new ‘making of’ video, embedded above. Its T-virus-style mutation was kicked off by game’s executive producer, Jun Tekeuchi. He wanted to switch to first-person and transport the game to a setting they hadn’t touched on before, leaving behind boulder punching meatheads for something more grounded.

Check out our list of the best zombie games for more shambling corpses.

While gameplay – despite the perspective shift – was inspired by the original games, that new setting, a dilapidated house in the boondocks, was influenced by another horror classic: The Evil Dead.

Tekeuchi was also a producer on Resident Evil 5, which had the difficult job of following up on the unanimously-loved fourth game. Capcom’s plan was to do more: bigger game, co-op, extra features, the usual sequel checklist. Resident Evil 6 pushed this ever further, offering four different campaigns to piledrive zombies in. As the scope grew, the games got worse, and they moved further and further away from their maggot-ridden roots.

Resident Evil 7 was an exercise in reminding themselves that this was originally a series about horror. Tekeuchi also worked on the first Resident Evil, and he wanted to recapture that feeling: a return to intimate horror. The first-person viewpoint was a perfect vehicle.

The video also shows a clip from the CGI test footage Capcom put together back in 2014, proving that the first-person concept was in place around the same time P.T. terrified PS4 players with scares from the same perspective.

There’s also a little chat about cut content, from the Baker’s pet dog to actual zombies that forced players to hold their breath to bypass. Have a watch above – it’s super interesting.