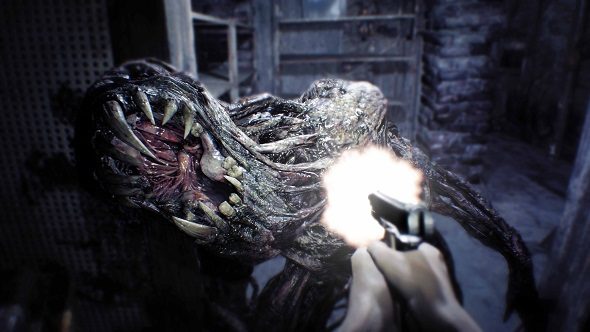 In an interview with Gamasutra, lead VR engineer Kazuhiro Takahara discussed the process behind creating both the normal and VR versions of Resident Evil 7. According to Takahara, Resident Evil 7 was not initially envisioned to have VR compatibility, it instead came about due to much of the development team becoming interested with the technology.

If you’re looking for a bit of a fright, these PC horror games should sort you out.

With development of Resident Evil 7 starting back in 2014, “official development utilizing VR didn’t actually kick off until October of 2015,” with the E3 Kitchen demo being a test to see if the Capcom team was up to developing a VR horror game. It was only after “continued positive reception of Kitchen at Tokyo Game Show” that the Resident Evil 7 team started work on making the game compatible with VR.

One of the main reasons Takahara cites for the addition of VR was just how scary it made the experience of playing Resident Evil. Unlike playing on a TV when you “can simply turn away from the screen and come back to the reality of your everyday life,” you are firmly stuck in the Baker mansion “no matter where you look” when playing in VR. Combine the headset with a decent pair of headphones and god forbid that 4D candle which makes your room smell like rotting wood, players actually feel that they are Ethan Winters, creeping round the Baker estate.

For all the potential, the Capcom development team did struggle with trying to keep both the VR and non-VR versions roughly the same game. Takahara and the team could not rely on tried and true Resident Evil elements, like “still-camera cut-scenes” or “old control scheme conventions” when in VR. This made some staff members feel like they were working on essentially two different games during Resident Evil 7’s development cycle.

As switching between the VR and non-VR versions was becoming quite the drain on the development staff, Capcom eventually established a dedicated VR team to work on that element of Resident Evil 7. Many of the VR team members were people who had played around with VR in their spare time, with Takahara commenting that the team were forced to make “a lot of modifications to the system programming and assets to work with both VR and non-VR.”

One thing that did stay firmly the same between both versions of Resident Evil 7 was the decision to move Ethan around using a controller. According to Takahara, the usual VR approach of having the player warp from room to room “broke the level of immersion [the team was] trying to achieve,” as you could simply teleport out of danger, instead of having to run away from a monster.

By using the standard analogue stick control method, players felt like they were actually in Ethan’s shoes, rather than just a headset zipping around the mansion. It also made it “easier for players to bounce back and forth between the two modes if they so desired,” rather than having to learn a vastly different control scheme if they wanted to play both versions of Resident Evil 7.

Despite all the challenges and difficulties with ensuring a fairly unified experience between both VR and non-VR versions of Resident Evil 7, Takahara stated that it is something Capcom definitely want to experiment with in the future. “There was zero assurance that we’d succeed, but we were motivated by positive response to Kitchen and recognizing that this was a brand new experience that no one had seen before,” said Takahara, proud of his team’s accomplishments at navigating their first real experience with VR.

Personally, I’d love a Phoenix Wright VR game where you go around inspecting evidence before eventually delivering it in court. The ability to actually throw your hand forward and shout “Objection!” would be something, so get on that Capcom. You can have that idea for free.