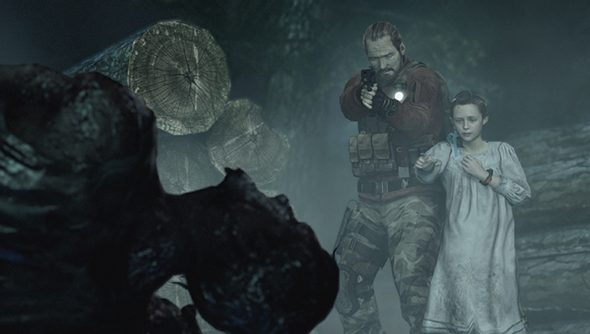 The first episode of the multi-part zombie spookfest Resident Evil: Revelations 2 launches on PC on Wednesday this week. It’s a third-person horror action co-op shooter comprised of two halves, one in which you and a scary little girl explore a seemingly abandoned island of haunted ruins in search of your daughter, and one in which you run about the same island as the aforementioned daughter.

I’ve been playing it, and while it’s a little scrappy in contrast to the more heavyweight series entries, it’s a capable and satisfying shooter with some interesting ideas being bandied about. I spoke with Resident Evil: Revelations 2’s producer Michiteru Okabe and production manager Matt Walker about the game’s tangentially episodic oddness. Here are the things they told me.

PCGN: Resident Evil is a particularly violent series – I’ve just murdered a creature made of stitched-together human limbs – do you guys give much consideration to where you draw the line in terms of graphic violence?

Michiteru Okabe: It’s actually an interesting question. What happens is we have two different things that we have to look for. First of all, the fact of the matter is yes, Resident Evil is a game that’s known for having a certain amount of grotesque violence in it, right? And so when we make a game we have to decide how far we want to take that. But then we also have rules and regulations within Capcom itself telling us how far we should go or shouldn’t go.

In the most extreme cases, what we end up having to do is coming up with different versions of the game for certain regions. So maybe the ESRB region is going to get a version that has a specific kind of grotesque content in it, but then the German version, for instance, doesn’t.

An example of that is we have a new character called Natalya, right? She’s like a nine year old girl and as far as ratings are concerned, it’s like, well, you can’t give a nine year old a gun. Which is kind of a shame because our devs were like “you know what would be great? If we could do this kind of Kick-Ass thing, with a little girl who had guns and she’d be able to just go crazy!” 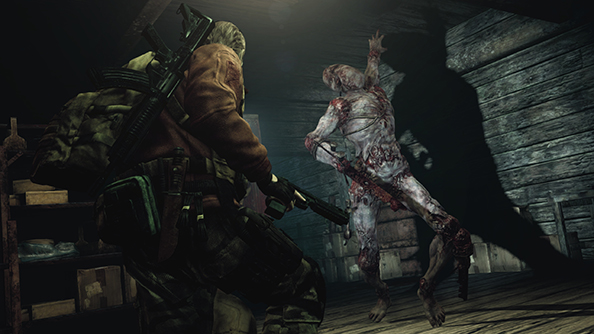 PCGN: That relationship between Natalya and Barry is novel for the Resident Evil series. What’s the thinking behind this relationship?

Matt Walker:So as soon as we decided we were going to make a second Revelations game, the biggest thing was to look at fan feedback. Our fans said that they want Claire and Barry. They want these characters. So we said “alright, it’s been a long time, let’s have some fun then in bringing them back and updating them – let’s find out where they’ve been within a certain part of the franchise.”

And so what happens is this game takes place between Resident Evil 5 and Resident Evil 6, and so we need a chance to see Claire and Barry at this point in time – Claire in particular, you know? It’s like… when we first saw her, she was just a college student in Resident Evil 2, right? But here we are now, she’s in her early 30s, she’s working at TerraSave, she’s been through a lot so she’s kind of like the grizzled vet. And we get to see how her relationship with Moira is going to transform and how she’s going to be the person leading the way for Moira now as she finds her feet.

With Natalya, we looked at Barry and considered how to use the partner support system there. One the one hand we’ve got Moira with Claire, and then with Barry we realised we already have these two great strong female protagonists, let’s try to put some contrast into it.” And so that’s how we ended up getting Natalya, so it’s like “okay, we’re going to have a female character but… she’s going to be a little girl.” And with that then, we also get the opportunity to explore more of Barry’s personality, and what it means for him to interact with her throughout the story. 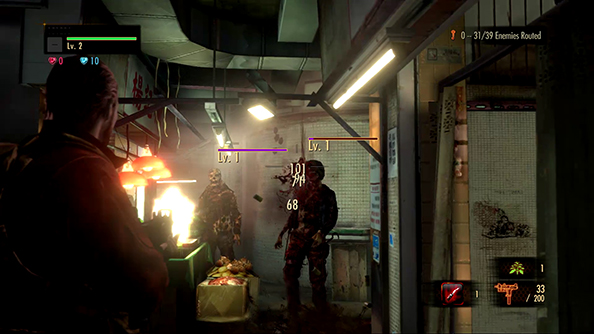 PCGN: With the HD remaster of the Resident Evil remake having recently launched, it really shows how the series has sort of split itself between new and old-school Resi. Those old games are incredibly different to what we’re playing now. Is there a sense of that at Capcom?

Matt Walker: Well, for this game, for Revelations in particular, our whole goal was “let’s do this kind of thing where we go back to roots, but we also modernise it.” So you’re not going to have tank controls, for instance, right? And that’s a very conscious thing on our part where we want to give people survival horror and we want it to be this resource management, intensive game, but we also want to give people the kind of comforts that they’re used to at this point.

People expect that there’s going to be autosave, right? You can’t force people to play a game a certain way because they’re going to be used to stuff. That said, some things don’t change, people wonder if this game has auto-regenerating health and actually – no there’s not, because we want to make it a kind of survival horror experience where it’s like you do have to find herbs. But that’s something that people have kind of come to expect now, right? Games have evolved over time.

PCGN: You talk about the modernisation of Resident Evil, and gave the example of ink ribbons giving way to autosaves. Are there any features that are sacrosanct, that cannot be touched? So you mentioned how you won’t have regenerating health: are there are always going to be herbs in Resident Evil, are there things that you just cannot and will not change about Resident Evil?

Michiteru Okabe: In the end it’s going to come down to whatever works from a gameplay perspective. Underneath the very specific elements of tank controls or herbs, there’s the essence of Resident Evil. There’s the survival horror, you know? And the essence of the Resident Evil franchise is something that has evolved over time.

Matt Walker:The director of this title is a guy named Yasuhiro Anpo. This guy was a programmer on Resident Evil 1 on the original PlayStation, so this guy has been around since the very beginning. We’ve heard from Anpo-san himself about how when we were working on Resident Evil 4, we changed the gameplay. With Resident Evil 4 we knew it was going to be survival horror but the gameplay is going to basically be stop and aim. So how you aim was going to be a kind of crucial element there. And because of that, we got rid of tank controls, and we lost the tank controls and we ended up getting this free-range movement in that game.

And so Resident Evil has always been this kind of thing that it has evolved as it’s needed to in order to stay fresh, so hopefully we’ll be able to keep doing that in the future. 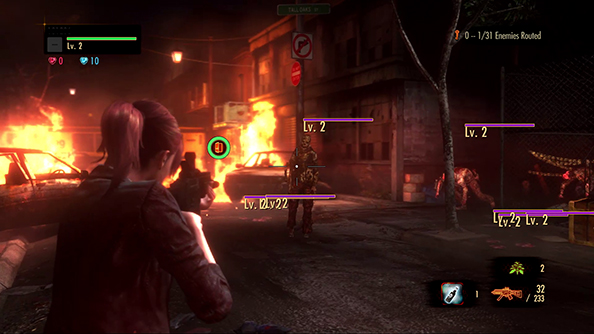 PCGN: Finally, and I’m sure I’m the first person to ask you this, but everyone has responded really well to the HD rerelease of Resident Evil Remake – are there plans to continue the series of HD remakes?

Michiteru Okabe:Hmm, well which one do you want? I’ll do my best to make sure it gets made.

Michiteru Okabe:Alright. I’ll see if I can get that through.