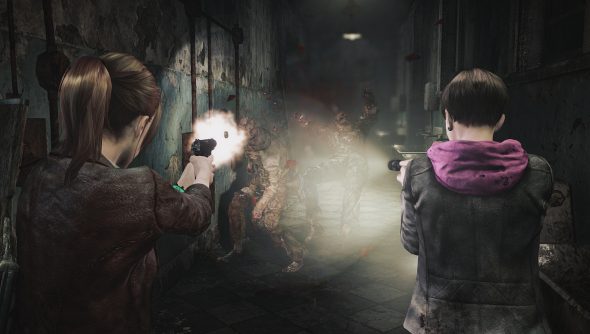 The one thing that was missing from the excellent PC port of Resident Evil Revelations was a co-op campaign option, offline or otherwise. It was originally designed for the 3DS, so the omission wasn’t surprising, but it did feel like a missed opportunity.

It looked like this would be rectified for the inexplicably episodic Revelations 2. Indeed, the Steam page highlights that it can be played in offline co-op as well as with an AI partner. This simply isn’t true.

From the Steam page: “Players will need to switch between the two characters (Claire/Moira, Barry/Natalia) to overcome the nightmares in either single player mode with an AI partner or offline co-op”

If you take a look now, you’ll see that this is still being advertised, despite the fact that this feature is not present in the PC version. But now Capcom has put an addendum at the bottom.

“The PC version does not support offline co-op play in the Campaign or Raid Mode.”

Offline co-op remains listed as a feature, though.

“The decision to prioritize a single local screen was made to ensure a stable user experience across a variety of different PC settings and devices. Raid mode will support online co-op shortly after launch when a free patch is available for players to download which adds this feature, but the main campaign on PC will only be available to play in single local screen.”

It’s the platform’s fault again. Pesky PCs, not being the same across the board like their console cousins.