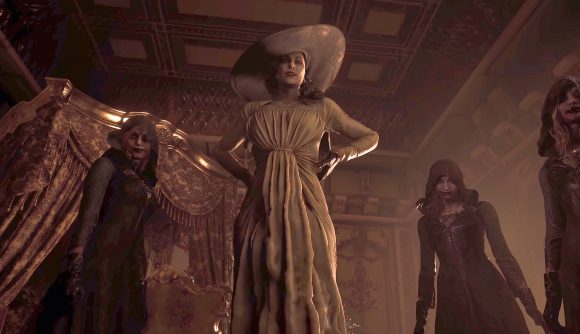 You might have spotted when Resident Evil Village was announced at Sony’s recent PlayStation 5 event that its logo bore a certain resemblance to its 2017 predecessor, Resident Evil 7: Biohazard’s – that is, the ‘Vill’ in Village was cleverly highlighted to form a roman ‘8’. However, the upcoming horror game’s not officially called Resident Evil 8, and it turns out there’s an intriguing reason for this: it’s because the eponymous village is kind of like a character in its own right.

That’s according to an interview with the survival game’s producers, Tsuyoshi Kanda and Peter Fabiano, in the latest weekly Famitsu magazine (via Kotaku). They’re asked about the Village logo  – and the VIII numerals – and why the game isn’t therefore titled Resident Evil 8, to which they respond (via Aniel’s translation): “You can say the Village is another protagonist in the game. We want players to clearly understand that.”

Further to this, the devs say there “isn’t really an official abbreviation” for the game, but that they’d “just be happy if you remembered Village”, according to Kotaku.

There are some other morsels of information on the upcoming game elsewhere in the brief interview (via a translation by Twitter user Alex Aniel), such as that the game’s “setting is somewhere in Europe”, and that “on top of fear, combat, and item management, exploration is a must in RE”, with confirmation that “solving puzzles is definitely in” the game, and the mechanic “expands the breadth of the gameplay”.

There’s no exact Resident Evil Village release date to make a note of just yet, but it’s currently slated to arrive on PC sometime in 2021. There’s also a first trailer to eyeball, which you can check out above.