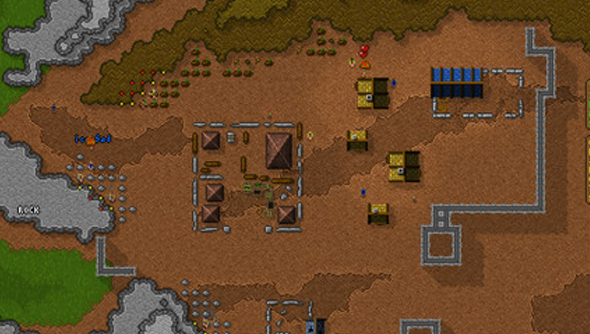 Ye olde times were tough for peasants. They could wake up one morning to find there’d been a shower of blood through the night or, if their lord hadn’t been doing his stuff, they might have no food to live on.

Still, if Retro-Pixel Castles is historically accurate then villagers also had themselves a lot of sex. So it wasn’t all bad.

Retro-Pixel Castles is a bit of a city builder, a bit of a strategy game, and a little like The Sims. You create construction jobs for your villagers who will then go and mine the resources to make it happen. That might be building an extra turret for your castle one moment and ordering for a new blacksmiths to be built the next.

What use would a castle be without violent invaders to defend it from? Retro-Pixel Castles world is one teeming with other lords, each with their own army and encampment. Often to expand you’ll have to march your troops in and have them show the enemy the sharp end of their swords.

You can see something of that in the tech trailer:

It’s not all blood and guts, though. Your villagers want to start families. So, whenever they’re not off fighting some war or building something for you they’re getting drunk and rutting. Over time the villagers will pair off and form relationships. It’s like your castle is some sort of couples retreat.

Retro-Pixel Castles is currently available through Steam Early Access if you want to have a try of this city builder-romance-violence simulator.