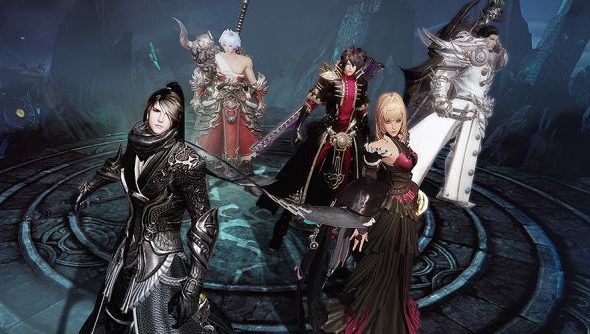 Not all eastern MMOs are created equal, and Revelation Online certainly comes with a longer CV than most. As well as the fairly standard cinematic trailer and massive, over-the-top graphical style, the game has two TV series in development based on its plot written by a best-selling fantasy author from China, Jiang Nan.

Here’s all the best MMORPGs on the market today.

You’re probably more interested in the game portion though, so here you go:

I’ve seen a few ridiculous trailers in my time but sword angel battle goddess is definitely up there with the best of them. Good work, everyone.

Flight plays a major part in Revelation, where the world is almost entirely open to doing it everywhere. Each character looks to have its own set of wings for swanning around, from feathers to, as seen above, swords.

There’s also the elements you’d expect – dungeon running, raids against towering mega-bosses, PvP battlegrounds and duels as well as a robust character generator for a variety of classes. Details are a little thin on the ground as to exactly how all this will be implemented in the western release, but there’s more info over on the official site.

If you feel like playing there’s a beta due before the end of this year, which you can sign up for over here. The TV shows – one animated, one not – are due in 2018, so full release could be a while off yet.