George Stobbart is a sociopath. Not two minutes into Broken Sword 5 and he’s giddily rifling through the pockets of a still warm corpse, in full view of a priest, in order to retrieve a bottle of cologne to spray on an art critic, who fainted at the sight of a murder but is the only person who knows the code to the office of the room containing the CCTV footage of the shooting of the dead man who Stobbart is robbing. A point and click adventure, the fifth Broken Sword is every bit the meandering trail of object discovery, wry observation and interaction it was almost two decades ago.

Except George Stobbart is totally insane. You can shut the eyes of the corpse by clicking on the man’s face, a respectful if weird thing to do for a dead stranger, but you can also open them again, which is psychotic. Maybe the player, given complete eyelid agency in this Parisian murder mystery, is the real madman here, and Stobbart’s an unwitting puppet of our insanity?

Maybe. It’s difficult to recall, but Broken Sword’s conspiracies have always been delightfully squiffy and faintly unhinged. The Kickstarted sequel was funded by the wallets of the series’ most faithful fans, and so throws protagonists George and Nico into a classic, contorted and fan-familiar crimescene, one that draws upon both subtle references to previous games as well as a full-on fanfare of returning characters. If you haven’t played a Broken Sword game before, you’ll feel slightly adrift as the game often turns to face the camera and gives a massive wink, but for the most part this adventure requires no previous understanding of Stobbart and co’s previous jaunts.

A painting has been stolen and an art gallery owner murdered in the process. Spying a befiddled alarm system, our George goes above and beyond in his role as an insurance assessor to figure out the truth and save his employer around €40,000. It’s a sum of money hardly worth crossing a Clouseau-esque detective and an ex-KGB oligarch over, but it’s precisely the sort of mystery that gets the man’s dusty old mystery gland pumping, so off he goes interacting with objects in pursuit of answers. Nico is here too, every bit as willing to interact with the scenery you click on, and together they slowly unfold the game’s plot, which progresses at a fair old whack, is satisfyingly winding and, while absolutely ridiculous at times, never too silly to snip your gossamer-suspended disbelief. This here’s the first episode of two, but it’s a hefty chunk of an adventure in its own right. 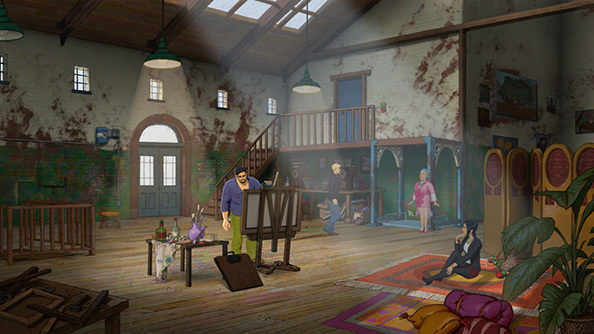 The roadblocks to your progress are familiar: people stand in front of doors a whole lot, requiring convincing or distraction to be moved out of the way. The more self-contained puzzles play on recognisable mini-games, such as one in which you reconstruct the pieces of a badly shredded letter by arranging them like a jigsaw, and another in which you must use a shop owner’s clues to come up with a new name for his store using a handful of working neon letters. Objects are context-sensitive too, meaning you’ll pick up things that are collectible, open or shut things that open and shut, or use objects that are usable. It saves you uselessly applying verbs to the environment, talking to lightswitches and trying to open a dead man’s face and kissing the inside of his skull.

While the narrowing of options makes Broken Sword 5 a more scenic and less taxing point and click (a robust hint system also prevents you ever getting stuck), it also strips it of the nonsense verb and item combinations that make the genre so appealing, especially for fairweather players. Fair enough there are no “I’m not putting my mouth on that” moments, but you’ll start to wish Revolution had had some fun at least with the stranger item combinations. I want to know what Stobbart thinks about me skewering a cockroach on a paperclip. I want to hear Nico plaintively offering a biscuit to a lamppost and being discouraged by its apparent lack of response. 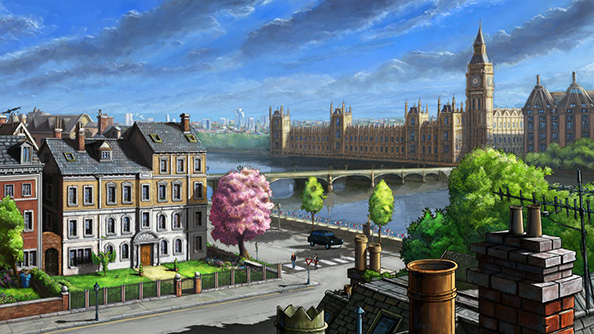 That absense of much content outside of anything directly relevant to the main thread of the plot filters through to a lot of other aspects of Broken Sword 5. The locations, while beautifully drawn, are utterly empty, as if the entire cast have fallen, Langoliers style, out of the time-stream to find themselves in a totally abandoned version of Paris. The 3D characters are layered awkwardly over painted backgrounds, often with mis-matched perspectives, an effect that looks nice enough in still screenshots but appears jarring and disjointed in motion.

Rigid and clunky character animations exacerbate the game’s visual problems, and the stopping and starting dialogue (seemingly caused by late-triggered animations) will have you impatiently clicking through the script before the actors have finished reading. Whether or not you can pin problems like these down to budgetary constraints, they’re still here: the stilted soundbooth vocal delivery and wonkily superimposed characters smack of distractingly cheap production. 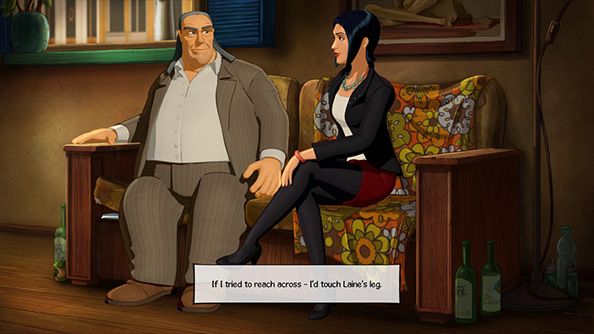 Most fans (especially those who funded the thing) will sail clear past those problems and happily engage with the game’s plot, its convoluted scenes and puzzlery. For better or worse, Broken Sword 5 is a point and click that wouldn’t feel out of place in the 90s, with nothing in its mechanics to suggest that any time as passed at all since around Broken Sword 2. In that sense Broken Sword 5 is laudably authentic, a classically minded point and click that proudly and defiantly sticks to its roots. In another, more pragmatic sense, the game displays the very worst grey hairs of an old dog of a genre.

Still, Broken Sword 5 will slowly worm itself into your affections if you expose yourself to its ever so gentle humour for long enough. Whatever the opposite of subversive is, this is it, and there’s something bizarrely, stupidly funny about Stobbart’s straight-delivery of an idea that his trap of putting a biscuit inside a matchbox is good enough that he might fall for it himself.

He is totally strange and lovely, an unknowable mystery unto himself. In fact, all of these 6 arbitrary review points are for him, why not.