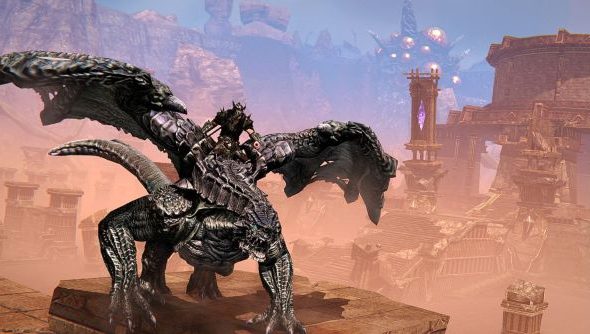 Alright, so we’ve had quite a few eastern-made free to play action-MMORPGs in recent years, but Riders of Icarus has grabbed my attention for a couple of reasons. One, it’s new and shiny and everyone can play it come July 6 in open beta, which is cool. Two: it’s almost exclusively about riding dragons around. All I’ve ever wanted is to ride a dragon around. With two closed betas under its belt, founders packs are now on sale ahead of everyone getting to go hands on, and there’s a gameplay trailer with plenty of the winged scaled ones.

Not your bag? Try one of our picks for the best MMORPG instead.

Here’s how it looks, if not necessarily exactly how it plays:

Everything here is definitely suitably extraordinarily badass and huge. Hopefully getting to the 10-dragon giant-fights is fun and involves as little grinding as possible. As for the founder’s packs, there’s three different levels, scaling from budget through to collector’s ed level. Here’s the breakdown:

All those are for sale over on the official site. They also give automatic access to any further closed betas they do, though there are no confirmed dates. We’d guess they’re planned for some time between now and open – maybe in late May or early June – but it’s equally possible there won’t be any more.

As detailed in the FAQ, these aren’t required for playing in the open beta, they just give the very obvious advantages, plus the head start. They’ll be sold until July 5, at which point the mounts in the Founder’s Pack won’t be made available elsewhere – this is it for them.

Obviously, have a read of what the game is like before you put any cash down. While there’s no upgrade option, if you do go for a lower-priced pack and find in open beta or between now and then that it’s really your jam, you can purchase the more expensive ones and double up on some of the rewards. Any of you folks played it? Let us know how it is in the comments.