The Rift that doesn’t have an Oculus attached to it recently went totally free to play, shooing its MMORPG subscription model out the door before activating its paid-for cosmetic items store, which allows players to stock up on bedazzling costumes and other wonderful trinkets. It’s a tumultuous and often confusing time in any growing MMOs young life, the transition into a free to play model, all of these exciting new feelings and impulses, players where there were no players before.

So how’s Rift handling it? Has it been a success? And how will the move affect further updates? How how how. I know all of the answers because I spoke to Simon Ffinch, with two effs, the senior design director on Rift at Trion, and he told me. He also revealed how he plays his own game in disguise in order to spy on players like a reverse Batman.

PCGamesN: So how successful has the move to free to play been for Rift?

Simon Ffinch: We’ve been free to play now for over a month and it’s been amazing. It’s doing very well for us. There were several factors driving our decision to do that. It’s something that we’ve questioned ever since we launched, we’re continually asking ourselves “are we doing the right thing? Should we change our business plan?” We introduced Rift Lite a while back which let players play for free up to level 20 and we considered if we should extend that program and take it up to level 50 while keeping paid for expansions. But after looking at where the industry was going and monitoring what our players were asking for we decided that it was time to go free to play. That’s where the industry was going, that’s what our players wanted, we just wanted to remove that barrier of entry so that everyone could just jump in and play under the assumption that if they loved what they were doing and played Rift and thought that it was a great game, they’d buy a hat. [laughs]

PCGN: Is that how the premium side of Rift works, just exclusively around cosmetic items?

SF: We never really wanted to make Rift pay to win or anything like that. So the store is about selling things that we think players will want, you know, which is just a bunch of fun items and a few convenience items. But you absolutely can’t buy the top tier raiding gear or anything like that, you’ve got to earn that in the raid, the same with top end PvP gear. There’s no item that you have to buy on the store if you want to be competitive, we don’t want to change Rift in that way. 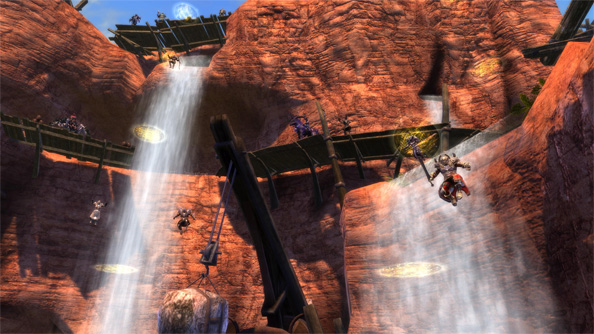 PCGN: So look what is the measure of success for you guys now, following your transition to free to play?

SF: It’s simply that we have players that are playing and having fun, which is what we had before so we’ve just opened it up to more players. To me, this is just a personal opinion, it’s: have we made the game fun enough that players stay? Are we offering them enough things that they want, and are they buying enough of those things to allow us to make new content which is what I love doing. So my measure of success is “am I still in business?”

PCGN: I think some players remain wary of premium item stores, they see it as an attempt to monetise a small percentage of players who are willing to pay a lot of money at the expense of those players who aren’t paying any money at all. How do you think you can fight that impression of what free to play is?

SF: Well, this is just a personal thing, but I just hate that word ‘monetise’. “Let’s monetise our players!” They’re people and they’re playing a game because they want to have fun, they’re not a frickin’ ATM machine. I don’t like that attitude at all, and in the business world you can’t help but hear it. In the development team we actively fight against it. I mean hey, I want to have a job, I want to have enough money to pay my mortgage and feed my family and I love making the game and I want to continue doing that. Obviously I want people to buy stuff but I don’t want them to ever feel like that’s why I want them in Rift.

The reason that I want them in Rift is because I’ve made a game that’s like “look what we’ve made! It’s fun! Come and play our game! Come and play with us!” We’ve got a lot of the dev team playing, incognito of course, because if I log on with my dev account I do nothing but answer questions from people. So I play anonymously, I have characters that I play and I think it’s a good game. And when you find something you like, like a movie you love or a book you’ve read or a TV show you want to share it with your friends, that’s my attitude to Rift. I’ve made something I’m proud of, I’ve made something fun, our team is amazing, our team is great, come and see what we did. 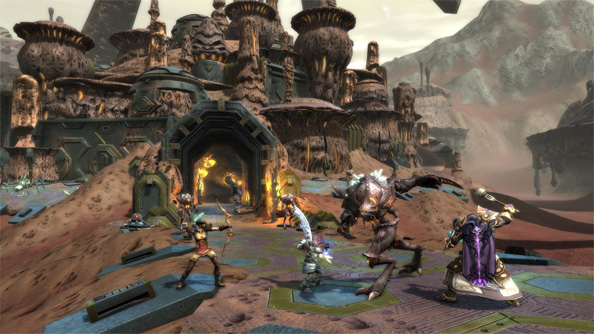 PCGN: Jumping in anonymously and playing, that seems like a really interesting experience to have as a developer.

SF: It is. I hear the raw feedback that’s for sure. So I know what people like and what they don’t.

PCGN: Do you have any stories?

SF: Not any particular ones. I mean in general it’s just so rewarding hearing one of your guildmates excited – I’m in a guild and they don’t even know I’m a dev.

SF: So I never ever go on Vent [voice chat] or anything because I don’t want anybody to recognise me from a livestream or something so I’m one of those people who pretends they don’t have a microphone. Some of the responses just make me glow inside. But then there’s also the other side of it, when they respond with “I don’t know what those devs were doing, they’re frickin retarded!”

I don’t take that personally. Sometimes I gently probe, being careful to not reveal who I really am, and then we talk about it with the team. One of the things that we pride ourselves on is that we’re not afraid to experiment. We’ve put some stuff in that hasn’t worked, quite frankly, and it’s gone, we’ll try something else. But if you don’t try something new you’re never going to do new things. I’m very happy with our success rate, most things that we’ve put in have worked out really great. The zone events that we’re famous for were actually put in in the beta. They were something that we’d talked about and we thought it’d be cool and one of our devs went off and did one and our players loved it. We’ve got loads of them now.

PCGN: I recently spoke with Arenanet, who have another very popular MMO, and they’re making a huge push towards very regular updates, while you guys seem to be doing more big milestone updates.

SF: We’ve been doing regular updates for two and half years. “Hi, welcome!” [laughs]. You’ve got to be careful though, we’ve discovered that you can have too much of a good thing. We actually overwhelmed our players early on and there was too much changing. So now rather than having constant stuff changing under you all the time and you feel like the ground is shifting and you can’t get your bearings we sort of mix it up, we have a weird update schedule.

We update every week, we have what we call a hotfix where we make sure that any problems are being addressed. We also deliver content in those updates but it’s generally something kind of small. Then we’ll have ones that are a bit bigger than that, and some medium sized ones, and some much bigger ones. So rather than this constant treadmill of content it’s a little bit more unexpected. The next big one is in September but between then we will deliver some medium sized updates, we’ve got Summerfest coming up, so we do have like a 2.3.1 as we call it internally, because it’s not something that we feel is big enough to call a full on update, but it’s still a lot of content. 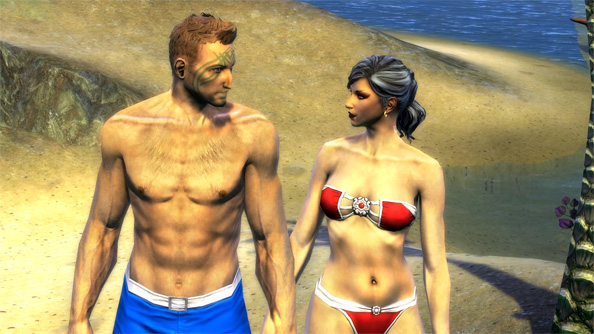 (This is still Rift. The Summerfest adds swimwear and tight bods.)

PCGN: Is it difficult to manage player expectations for updates?

SF: In MMOs more than any other genre there are segments of players, There are people who enjoy the solo experience, there are people who enjoy the high end raiding, there’s people who want to sit around in town crafting, there’s explorers. You name it, you can segment the players into lots and lots of different categories. Then people like mix and match pieces of it for themselves. So we try to put out content that satisfies each of these groups in a round robin fashion, so if we haven’t made any PVP content in a while, we’ll ask what can we do for PVP players?

But I also know that whatever we put out there, there are people who’re going to tell us it’s the best thing since sliced bread and others that tell us that we should all be fired [laughs]. So I just… you’re entitled to your opinion…

PCGN: As long as people are passionate.

SF: Exactly. You took the effort to make the post, and I would have liked it if there were fewer swearwords in it, and if you hadn’t disparaged my lineage as much, so whatever. At the end of the day whatever they’re saying on the forums they’re finding something they like because they’re still playing. 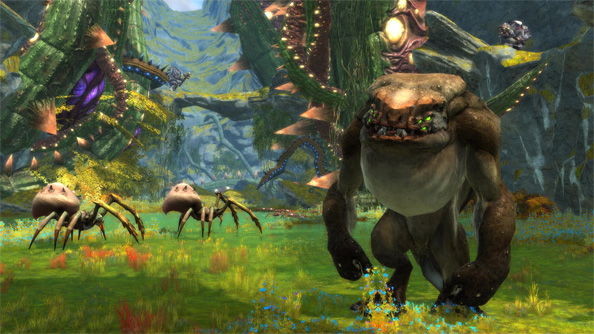 PCGN: So I was wondering if, now that players know that you’re in the game somewhere…

SF: They already know I’m in there, I tease them with it.

PCGN: Do they have enough information to piece your secret identity together?

SF: No, I’m very careful. I’ve watched other people accidentally out themselves and I’m like “well it sucks to be you, guess you’re starting a new level one”. No, I have four characters I play. Only my main is super high level. I’m terrified of being outed, I don’t want to be outed with that character because I’d never be able to play it again.

PCGN: Do you ever criticise the developers to keep your cover?

SF: No I’m pretty positive, and I also make sure I help other people and stuff like that. But thankfully we have enough helpful and kind players like that that nobody’s going to think “he’s too nice!” It’s amazing, I’ll see people posting on the forums and in general chat, saying things like “if you’re new to Rift and you’d like a mount come and see me in Port Scion and I’ll give you one, and maybe a couple of bags.” And I’m like, wow you’re a really fun person, thank you for making Telara a nice place to be.

PCGN: That’s always been my greatest experience in any MMO, starting off and finding a friendly person to help.

SF: I know, it’s lovely isn’t it? It’s like people aren’t so bad. Those trolls can go back under their bridge, there’s a lot of nice people too.