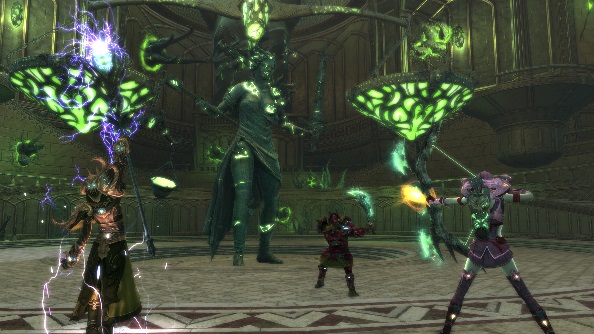 MMOs are pretty big to begin with, but Rift is getting even bigger with its largest update since it launched. Into the Wilds adds the new zone of the Planetouched Wilds, which was stolen away from Telara decades ago. But it’s back now, ready for you to put your digital footprints all over it, and it brings with it a new calling and dungeon.

Looking for a grand adventure? Try one of the best MMOs on PC.

The new calling is the Primalist, who uses Fury and Cunning to bring down foes. As the name suggests, there’s an ancient, almost dawn-of-man feel to the Primalist. The calling can be bought from the store in The Wilds Pack or Primalist Calling Pack.

The Planetouched Wilds are grasslands cursed by karma, with new dangers and locations such as the Cosmic Steppe or the court at Shal Korva.

Rhaza’de Canyons sits below Shal Korva and is a dungeon made up of a twisting network of canyons. The ruins of Rhaza’de lie down there, within which is an Ascension Machine being used for evil purposes. You’ll need to enter the dungeon and stop the minions of Theth.

There’s a new mode for Warfront too: Assault on Bronze Tomb. Teams much loot or protect while a group of mercenaries try to control an ancient tomb.

The new update is live today, so you can start enjoying the new content as soon as you log in.