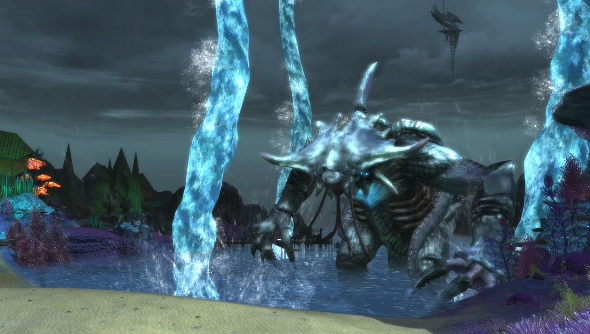 Trion’s MMO Rift is preparing to send players off to the island of Tyrant’s Throne in its upcoming 3.1 update. Storm at Sea players will witness villain Crucia ready her armes for a new planar war.

Coming with the update is a new 20-player raid, three new planar combinations, and a fresh collection of new items and minions to add to your inventory.

The Storm at Sea narrative starts with your arrival at Tyrant’s Throne, which is overrun by The Storm Legion, who will put up a hardy defence. Crucia herself is lying in wait beneath Tyrant’s Forge, a huge citadel that holds the new 20 player raid. Inside a mechanical dragon is being constructed, and if allowed to be completed it will allow Crucia to reign over the planes. Along with 19 other players, you must bring and end to both Crucia and her plans.

Joining this huge chunk of new content is The Rhen of Fate, a new 2-player Chronicle that shows what would have become of Finric if you had never entered the planes. There’s also a Nightmare Raid Rift, and three new planar combinations: Dusk, Dust, and Steam.

To add to your collection will also be new minions, capes, and various new items.

The 3.1 Storm at Sea update will be live from January 28th.