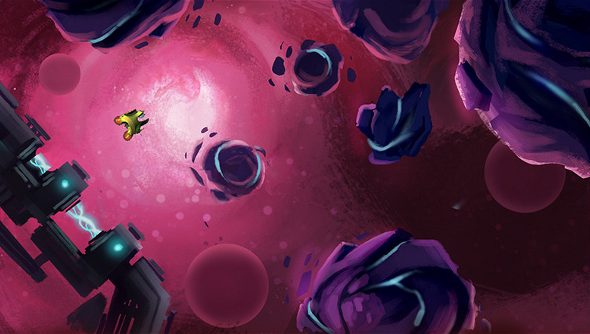 Rust developer Facepunch Studios has been working on a number of prototypes along with their flopping dong and survival simulator. Yesterday, Garry Newman promised that the studio would stop hiding these prototypes, even though it’s hard to do “especially when you’re quite early on and it looks like total shit”.

Woolridge says that it can be played with a gamepad or a mouse and keyboard, and won’t require a maths degree to figure out weapon stats. No degree required to play? Disagraceful. “The one that does the most damage is the best gun, and it’ll just say so,” he says.

Players will be able to flit around space, blowing stuff up – as is their wont – employing three different classes based on roleplaying game archetypes. The ranged class is a traditional shooter, best at dealing with enemies from range and pouring lots of bullets into things. The caster class chucks out magic spells, doing area of effect damage, but it’s a bit frail.

It’s the melee class that’s a bit strange, since it’s a class that doesn’t shoot, in a shooter. “Your basic weapon is a close ranged energy beam (“bacon sword” as someone here called it after seeing my awesome coder art for it) that you can aim around your ship and attack close ranged stuff,” Woolridge explains. “It gets bigger the more stuff you damage with it, and it shrinks back down again when you stop attacking stuff. Your abilities are focused on pulling stuff in to your range, local area of effect blasts and support beacons you can drop that effect anything in a close range (including you).”

Ships can be expanded with loot, and the placeholder inventory shows slots for shields, power, weapons, engine and hull, along with other unassigned slots. As well as growing more powerful with loot, the ships have talents that unlock every few levels, with each class having their own selection of talents.

Even at this very early stage, there’s already functional co-op. Well, it’s functional in the sense that two or three people can fly about together blowing stuff up. “Playing with other people is always more fun – and when there’s loot involved, half of the fun is trying to get better stuff than everyone else and then telling them about it,” Woolridge said.

There’s also a focus on replayability. “Going through the same areas multiple times for loot should feel different enough each time that you want to keep doing it!”

A short video shows off how it works so far, with the caster class killing things with one of its first abilities. There’s also a pink asteroid, which is something I’m sure we can all get behind. The clip is absent much art, as this is still an early prototype.

Do you lovely lot fancy a twin-stick shooter? It sounds pretty nifty.