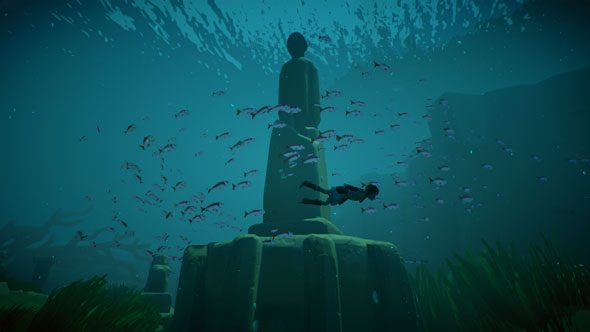 I’ve just completed a puzzIe, but instead of moving onto the next one I got a little sidetracked. I’m running through the perfect waters of the Aegean-like island where Rime takes place, and am captivated by the animations of the young boy I’m controlling. With his arms flailing in that semi-controlled way that anyone who was a bit gangly before the age of 14 can relate to, and his knees thrusting higher and higher the deeper into the water I go, I feel an instant, empathetic warmth towards Rime’s wordless hero.

For more like Rime, check out our favourite indie games on PC.

Rime has been a long time coming. When it was still being published by Sony, developers Tequila Works had to rebut superficial early comparisons with The Legend of Zelda: The Wind Waker based on its visual style. Now, after playing Rime at Tequila Works’ offices in Madrid, I can put those comparisons to bed. Aside from (cel-) shades of Wind Waker’s aesthetic, the two have very little in common.

If I had to make a conveniently reductive comparison, I’d describe Rime as more akin to The Witness, though more narrative-led, and less puzzle-obsessed. But the game’s lead designer, Kevin Sarda, assures me that no one at Tequila Works has played The Witness, because of a rule at the studio not to play similar games during development. “I haven’t played The Witness, The Last Guardian, Shadow of the Colossus. I only played a bit of ICO years ago”. He cites the surreal art of Giorgio de Chirico (also an inspiration for Ico, incidentally), and Zelda’s framing of certain puzzles as inspirations, but it quickly becomes clear that Rime is its own beast. 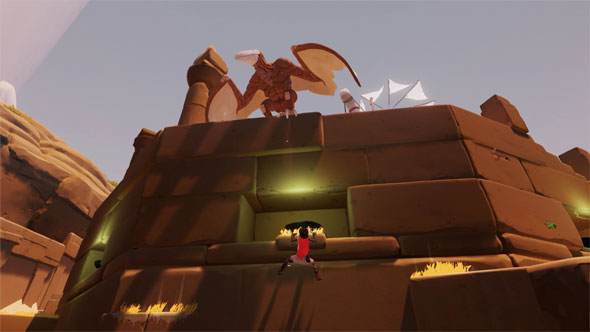 As a young boy, you wake up on a gorgeous island with no understanding of how you got there. The island is mostly abandoned, but speckled with caves, temples, waterfalls, and a formidable monolithic tower right at its centre that I’m safely assuming is your ultimate goal in the game. The island, Sarda tells me, is the heart of both the game’s design and narrative.

You’re not entirely alone on the island. A mysterious fox pops up to guide you in the right direction when you’re lost, and you’re also watched over by a red-hooded faceless stranger who looks like a wayward traveller from the comparable PlayStation title Journey. During my playthrough, I also encountered a giant vulture-like bird, a large population of ethereal Miyazaki-like shades who evaporate in self-defence when you get close, and a thriving population of pigs and boars who you can shout at and antagonise if you want to indulge your inner animal bully (you are a child, after all).

It’s all wonderfully enigmatic, and while I got little clarity on the plot during roughly three hours of hands-on time, the devs tell me that it’s all out there, scattered around parts of the island that you won’t find if you just stick to the mainline puzzles; even when you do make these discoveries, they’re presented in a way that encourages you to form your own conclusions rather than hitting you over the head with definite meanings. 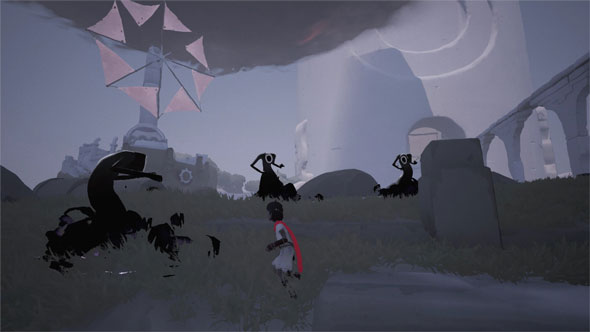 So what do you actually do apart from high-knee-running through water and tormenting the local porcine populace? Puzzles. Lots and lots of them in all shapes and sizes.

As with The Witness, the puzzles of Rime take you on a learning curve without ever explicating what you’re supposed to do. The early ones entail carrying blue orbs between plinths, then shouting to make them whizz through the air, do a little light show, then slam into the orb-shaped locks which unlock the next area. Shouting is a key mechanic in Rime, but it took a time to perfect it. “His shout used to be annoying”, says Sarda, “so we changed the pitch, but also made it contextual. There are different shouts for different puzzles, for boars, and for whatever other creatures you encounter”. A touch I particularly like is that when there’s nothing to shout at, the boy will just shrug, preventing the game’s serene soundscape from being a horrible cacophony of endless caterwauling.

Subsequent puzzles involved some perspective trickery, namely looking through keyholes to align them with giant keyhole-shaped statues in the distance, and even controlling the sun in the sky to complete shadow-based puzzles. It feels like a gentler take on the regimented – some would say aloof – grid puzzles of The Witness, and while Rime certainly forces you to think, it’s not likely to leave you staring in despair at your screen for three hours.

Sarda describes the island as a character unto itself, whose mood keeps changing as you progress through the game. I experience this shift in the second half of my playthrough, when things become a little more unsettling. Where before the climate on the island was pristine and mediterranean, later everything felt relentlessly arid, as denoted by the rippling heatwaves visible at the juncture between sky and land, which was now strewn with the burned-out husks of some ancient civilization. 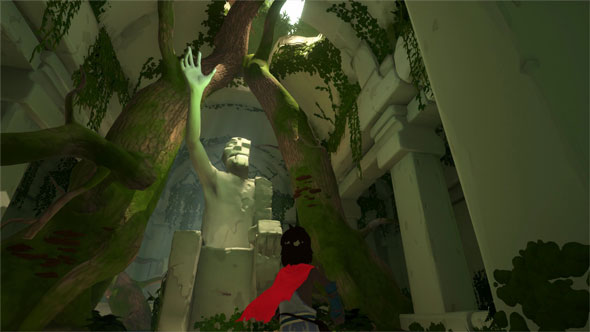 I began to cross a bridge overlooking this harsh but beautiful new landscape (even though the way forward always feels mysterious in Rime, it’s elucidated through clever camera angles and the sporadic appearances of your fox-guide friend). Suddenly, an otherworldly caw ruptured the serenity, and a giant vulture nose-dived towards me. In a rare cut-scene (where I reflexively primed my fingers for a quick-time event that never came), the birds ran me off the bridge onto the sands below, triggering a sequence where you need to run from cover to cover before the creature gets you. It’s a timely counterpoint to the meditative pace of the game up to that point, but still retains a puzzle game sensibility at heart, as you search for clues on how to down the bastard thing.

The final puzzle of my playthrough demonstrated that Rime isn’t afraid to break with its own norms. For reasons that I won’t reveal for risk of spoiling the experience of discovering these things yourself, I unexpectedly ended up underwater, swimming among the coral and popping air bubbles, Sonic-style, to prevent a watery death. This led me to underwater temples where more puzzles awaited, this time combining several of the rules I’d learned up to that point. It felt like a fitting bookend to my hands-on – a reminder that as I was progressing through the game, I was also expanding my lexicon of the world’s unspoken rules.

The puzzles are a good challenge, but the fact that the fox will guide you if you get stuck for too long speaks of the devs’ intentions to keep the player exploring, enjoying, and learning the island’s mysteries. According to Sarda, the real magic of Rime isn’t in the puzzles themselves. I was surprised to hear him say that Rime isn’t really a puzzle game. “It fits in the puzzle genre, but it’s not a puzzle game. We want people to explore wherever they want without feeling like they’re stuck. That’s why we have collectibles and all these interactions between the boy and the environment”. 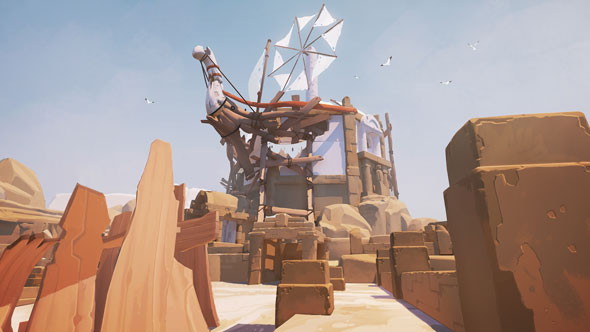 Rime’s island is a place to soak in, which helps explain the absence of a sprint button that you’d inevitably end up holding down all the time. “There used to be a sprint button, but then we realised there wasn’t a reason for people not to press sprint”, he says. Instead, if you’re running in a straight line for long enough, the game realises it and the boy automatically breaks into a sprint. “When making a game, there’s always a conflict between whether we want players to stay in one place and look around, or push on with the gameplay. For Rime, the art is more important than the design, and we want players to experience that.”

During my leisurely-paced wanderings, I discover a secret section of the island by stumbling into a cave hidden behind some shrubs. Inside, I find evidence that some mysterious life-forms had perhaps once existed on the island. Then, instead of the secret path looping me back to where I came from, the cave emerges onto a beautiful cove that I’d never have found had I stuck to the main puzzles. As with the water-wading I mentioned earlier, I again get a childhood flashback, this time to that feeling of pushing my way through undergrowth to emerge onto a meadow or other unexpectedly pleasant spot that I’d duly declare as my ‘base’. The game really does a great job of catching the childlike wonderment of discovery.

At 10-12 hours (without exploration), Rime isn’t a long game, and Sarda candidly tells me that while there’s plenty of replay value for those looking to decipher all the strange structures/creatures/things, the priority for Tequila Works was to offer a character-driven game. “No, [replayability] is not the most important thing,” he says. “We don’t have an artificial way of making people play the game again, but we want it to feel different if they do,” he says. “You can jump into it again just to chase some boars, or gather clues and create theories on how all the characters – the child, the bird, the fox, the island itself – are connected.”

In my short time with Rime, I’ve already experienced memorable moments of haunting mystery as well as carefree joy (culminating in me cannonballing off a cliff into the water below). It’s an intoxicating place, and I’m already looking forward to my next visit.