It’s easy to forget just how influential Dwarf Fortress has become on gaming as a whole. Despite being infamously inaccessible, the freeware world-generation and strategy sandbox has inspired countless imitators, and many others games have taken distinct inspiration.

Of all the imitators, RimWorld is probably the most impressive, combining many of Dwarf Fortress’ procedural systems with a smoother UI and a relatively comprehensible Firefly-esque ‘frontiersmen in space’ setting. This week, it feels a little closer to being a finished game, with its latest update shedding the alpha designation as it moves up to beta, bringing a lot of exciting changes with it.

Rimworld a little intimidating? Prefer your colonist fantasies to be a little more hands-on? We’ve got you covered with our best survival sim picks.

Beta 18 comes to us under the subtitle ‘A World Of Story’. As you can see in the abridged update video above, or the more extensive changelog here, this largely means a slew of ideas picked almost verbatim from Dwarf Fortress, including a narrative combat-log describing the battle exploits of every participant in a fight in lurid prose. Sure, that guy is dead, but it makes for a much more interesting aftermath when you can see that he was set upon by a half-dozen knife-wielding pirates that gouged out his eyes before perforating the rest of his body.

Outside of UI changes, there are some fun new toys to play with. There’s been a slew of pre-collapse ‘forgotten’ technology added to the game. While you can’t replicate any of this yourself (nobody in the current era can even figure out what this stuff is made of), it does amazing things. There are items like a psionic emitter that improves the mood of everyone near it – ideal for putting in a crowded bunk-room, or in a prison to help dissuade an uprising. There are also exceedingly rare injectors of healing nanomachines, which are even capable of repairing ancient wounds, scar-free. 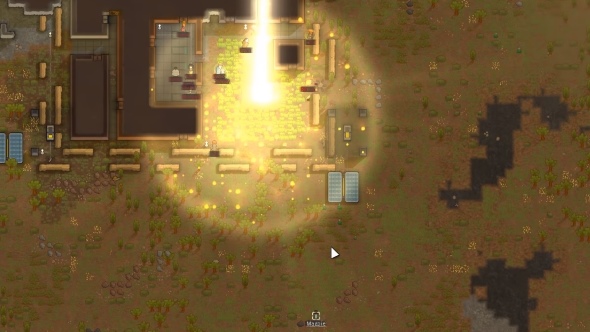 Most immediately exciting among the artifacts are targeting beacons that let you call down orbital support fire in the form of a sustained beam of energy or a building-flattening explosive bombardment. These are hard to find items, and single-use-only, but when you absolutely, positively need a problem fixed with excessive force, they’re the best way to do it.

In one final nod to Dwarf Fortress, they developers of RimWorld have expanded the amount of things that particularly stressed or happy colonists can get up to. If in a particularly sour mood, one colonist might decide to bully another for the day, following them around and hurling insults. Really cranky citizens might just go around randomly breaking things in a mindless tantrum too, and REALLY pissed off people might decide to raise a middle finger to everyone and everything and stage a jailbreak, emptying your prison cells.

Conversely, really pleased colonists might suddenly find themselves capable of great works of medical skill, crafting quality of work efficiency, so you probably want to keep your people happy. There’s plenty more to this update besides (including some fun new disasters, such a Sim City-esque tornado), but perhaps that’s best experienced by yourself.

RimWorld is available direct from the developer or on Steam for £23.79/$30