Ever since its earliest days, RimWorld has been about survival. About rebuilding and escaping the harsh planet where you keep finding yourself time and again. However, even while being crash landed on a desolate world, your impudent colonists have the gall to complain that their solar powered billiards room isn’t pretty enough.

And may God have mercy on your soul if you don’t provide a table within reasonable distance from the fridge. Well, with the RimWorld – Royalty expansion, your colonists are even pickier!

As the name suggests, the core of RimWorld’s first (and so far, only) official DLC pack is ‘royalty’. An empire now controls the planet you’ve found yourself crash landed on and they are a haughty bunch. With the new quest system they will periodically contact you, call you unwashed, and ask you to look after their terriers. Oh, but be warned, some orbiting mechanoids want those terriers dead for some unknown reason. Normally that sort of request would be instinctively ignored but the emperor’s cronies have a way with words and are able to offer psychic powers and royal favour – and these powers are game changing.

After a couple of quests, our resident boss figure had managed to get herself into a pretty sweet position with the empire which let her use psychic powers and call in a squad of empire soldiers. 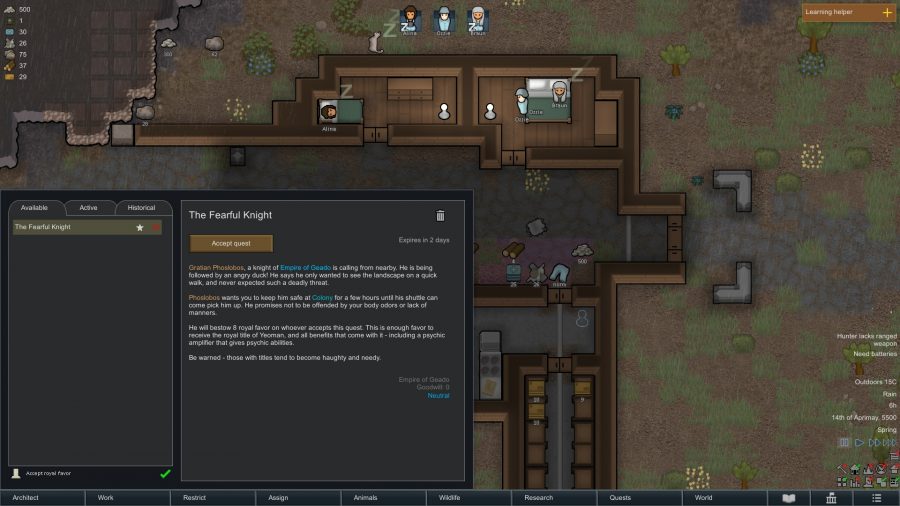 Which was critical as the last quest we’d completed left a half dozen mechanoid clusters around the map. Mechanoids don’t just wait for you to awaken them or come in raids anymore, now they airdrop small camps with slugger turrets and barricades and psychic suppressors. And now they have a sniper mechanoid! Thankfully the empire soldiers are fairly well equipped and were able to deal with all but one of the camps. Annoyingly though they have built in acidifiers that mean all their gear melts upon death. Super helpful.

The psychic powers are game changing

The downside to getting these powers is that your royally favoured colonist now demand a throne room and clothing that fits their standards. And I say downside in a purely mechanical sense.

The whole undertaking quests and gaining favour in order to get rescued by the empire is a fantastic addition that changes the game up nicely while still being entirely optional. You can even reject royal favour and ask for better item/silver rewards instead if you don’t want to deal with your conceited colonists.

As for the psychic powers, well, the empire controls them and using them without their express permission is grounds for a blood feud. But there are ways around these systems which the game handily provides early on. 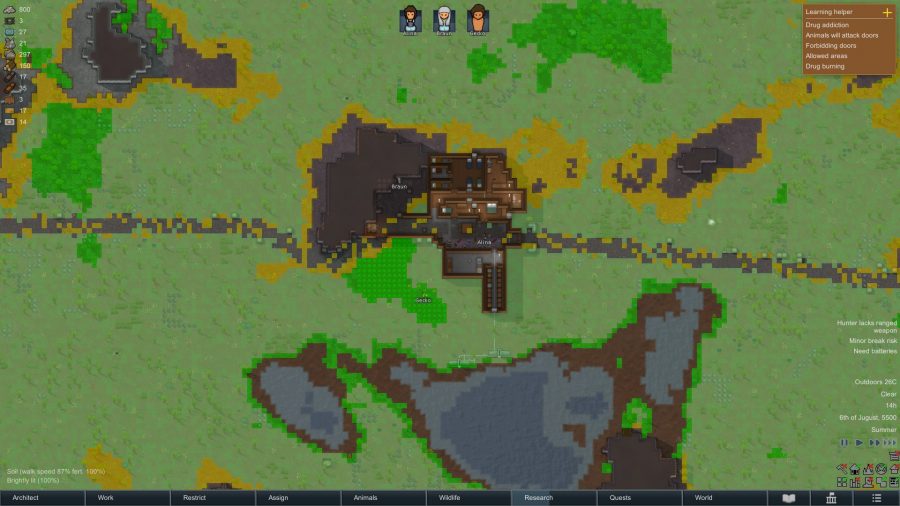 They’re more difficult but it gives that feeling of rebellion that we all desperately crave and it means you don’t have to build a throne for Murphy the Cannibal. For anyone concerned about balance, psychic powers come in tiers and inflict a new stat called ‘psychic entropy’ which can seriously hinder the user. Having them is a notable boost, but no more than finding a lucky supply pod.

Royalty is a great addition to an already amazing game

But perhaps the best part for any long term fan is the new music. The original RimWorld soundtrack is amazing but after eight years it’s also great to hear something new and composer Alistair Lindsay has done a beautiful job. The new music keeps that ambience but some songs branch out.

If you browse the RimWorld mods available on Steam, you’ll notice that one of the more popular options is Orion’s Hospitality. Being able to build a beautiful base/castle is meaningless if you don’t get to share it with passing tribes and merchants.

And while Royalty doesn’t quite match Hospitality for options, it has taken a step in the right direction with ‘host quests’. These quests ask you to host a member of the empire for a set amount of time, keeping them safe and keeping their happiness above a set level. The only catch is that they always seem to be targeted by someone or something. This is a bed and breakfast not a safehouse! 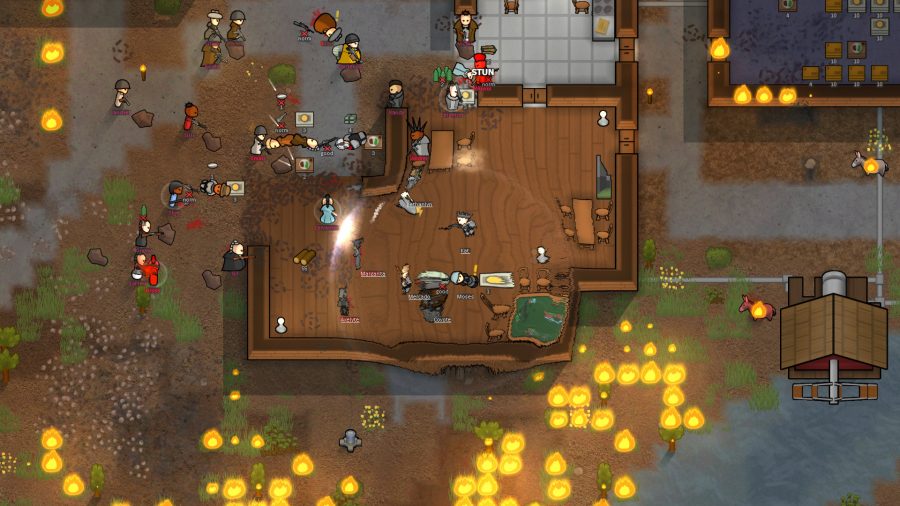 No that was not a room filled with human leather hats and I’ll thank you to keep your accusations to yourself! Royalty is a great addition to an already amazing game and while the price might be a little steep, developer Ludeon Studios have managed to keep support for RimWorld going for nearly seven years.

Buy now: Pick up RimWorld if you haven’t tried it yet

If this helps Ludeon keep going for longer then I for one am more than happy to support them. And with the new quest system designed to be modder friendly, this looks like a new golden age for RimWorld mods and a new dark age for my productivity.

Royalty ushers in a new golden age for RimWorld, and a new dark age for everyone's productivity.