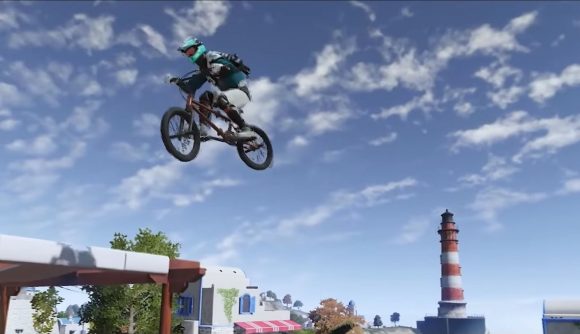 In Ring of Elysium’s original map, the force pushing players together over the course of each map is the massive snowstorm called Ymir. On the more temperate island of Europa, Ymir is replaced with the ash cloud created by the eruption of the island’s central volcano, Alecto.

Europa looks like a nice place to visit – it’s covered in palm trees and Spanish mission-style buildings, with beautiful ocean views everywhere you look. There are also some new ways to get around: on Europa, you’ll be able to hop on a BMX bike, which you’ll be able to take over to the local skatepark for some half-pipe action. There’s also a new hang-glider, and an incredibly nimble grappling hook that seems to be able to attach to just about anything, including the rescue helicopter.

Aurora Studios says there’s also a new submersible, which you’ll be able to use to navigate an undersea tunnel that takes you across the island’s harbor. In the trailer, it seems you won’t be alone under the waves – there’s a massive plesiosaur shown in the trailer, as well as an octopus big enough to take on Moby Dick.

Have a look at the trailer:

It should be a welcome change of pace for players who are a little tired of the snow. And who isn’t up for a pleasant trip to the Mediterranean? Plus, if you find yourself missing the bike tricks from Radical Heights, now Ring of Elysium has you covered.