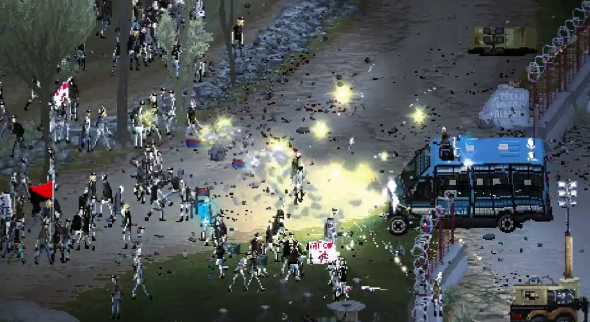 Five years ago, Leonard Menchiari found himself facing a line of heavily armoured police. The encounter took place at the NO-TAV riots in Val Susa, Italy, where Menchiari – formerly an editor and cinematographer at Valve – stood alongside fellow environmentalists and other upset locals to protest against the construction of a high-speed railway line in the area. As the standoff became more aggressive, the casually dressed gathering clashed with the riot police who responded with tear gas and water cannons.

During the confrontation, a number of people were injured on both sides. But it wasn’t projectiles or jets of high-pressure water that struck Menchiari that day, rather the realisation that the police, while certainly better organised, were just as afraid as he was.

Riot: Civil Unrest is out now on Steam.

From that experience emerged the idea for a game. But where the RTS genre usually deals with vast historical or fantasy battles, Riot: Civil Unrest – described by its creators as a “real-time riot simulator” – examines conflict on a more domestic scale. That greater intimacy presents a real challenge for the team when it comes to depicting the game’s politically, and personally, charged situations. And that problem is exacerbated by their immediacy – all four of the game’s main scenarios are based on events which took place in the past decade. Were the team concerned about such potential pitfalls?

“Yes and no,” Ivan Venturi, Riot producer tells us. “In Italy, the game was mentioned by the Franco Maccari, the secretary general of CIOSP, as an instigator of violence – and an important Italian newspaper echoed that. [But the team] isn’t worried about that – one of the original aims of the game was to make people aware of things which other people don’t want to be known.”

Riot invites the potential for further controversy by allowing you to play as either the rioters or the police in every conflict. Peaceful resolution confers political bonuses that will help you in subsequent scenarios – non-violent protest, for example, might put the police on edge the next time you meet as they become hyper-aware of press coverage. But deadly force is always an option, whether it results from hastily assembled molotov cocktails, or government-issued rifles. 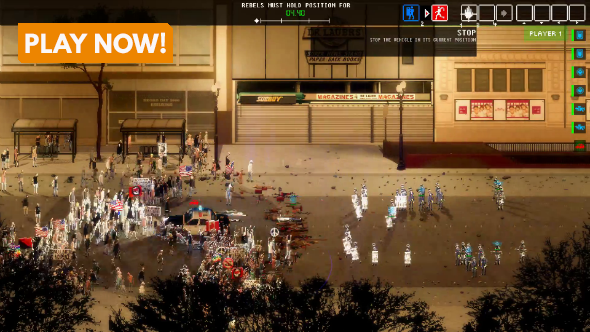 “The key to the game is violence, yes – you can use it in both factions,” Venturi says. “You /have/ to use violence if your objective is to destroy something, or if you have to clear a place with armed people holding it. But violence is also your worst enemy – the key is to achieve what you need to using the least amount of violence possible.”

The emotive nature of such clashes is replicated in an unusual control scheme. On the face of things, it is fairly standard practice: you can select groups either by clicking on them, or the icon that represents them at the top of the screen. Right clicking while having a group selected directs it to a position, and you can set each one to aggressive or defensive mentalities – and, if playing as the police, even create specific formations. In addition to all of this, you can take four abilities into battle, ranging from stones to toss at riot shields, through to the more abstract Social Media which allows protesters to call for reinforcements on a cooldown timer.

But while the mechanism is transparent enough, its reactivity is more inscrutable. Squads of people, whether professional or otherwise, are slaves to their emotions and can respond to situations in unpredictable ways. A frightened group may not do as you ask – or worse, scatter and retreat. It is a nod to realism that does more for the game’s sociopolitical cause than it does for satisfying gameplay, and as such the setup may frustrate some players. 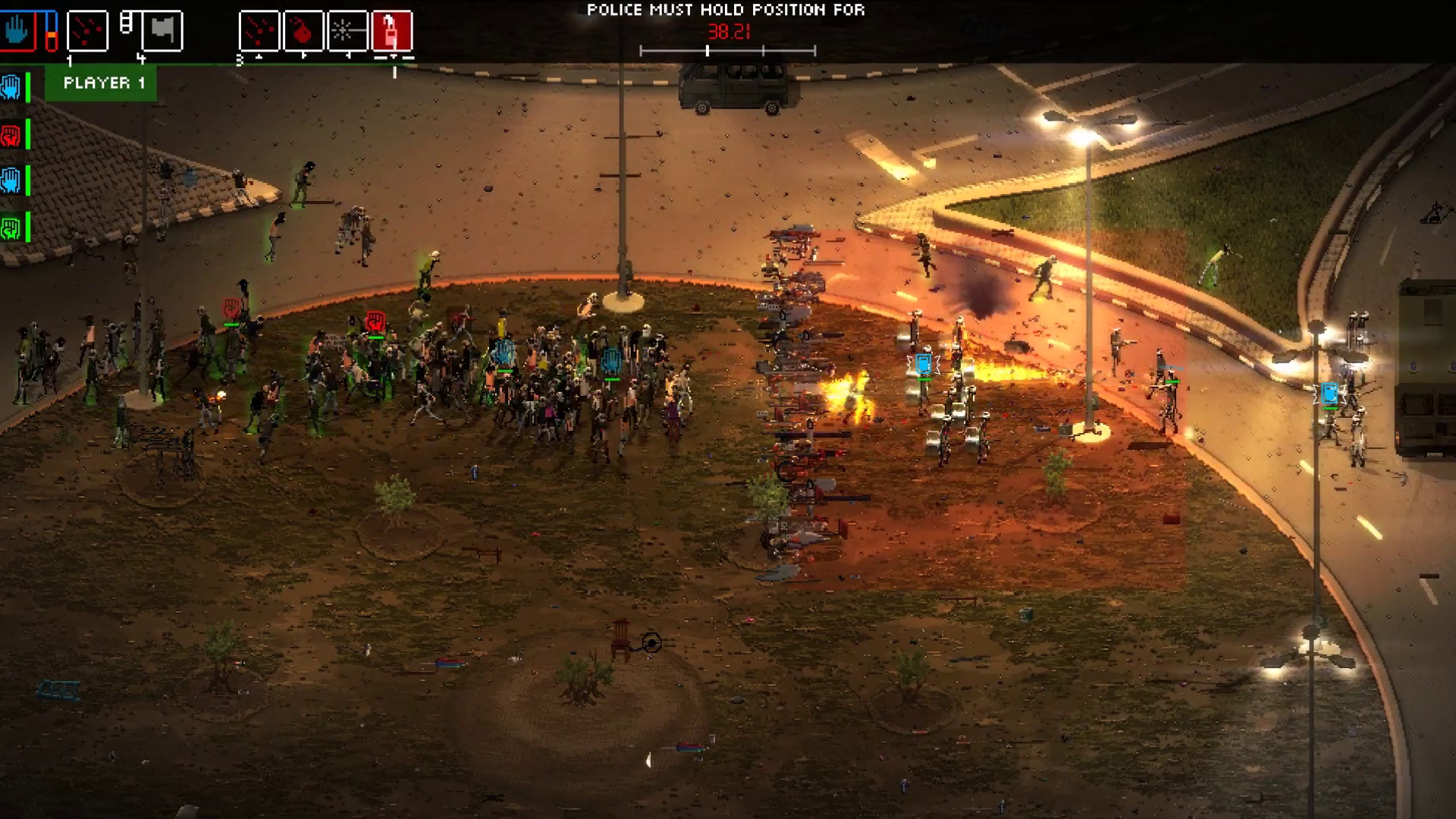 “Riot is a RTS, but an unusual one,” Venturi says when we put this to him. “In a real riot, confusion and disorder are catalysts. The crowd, but also police units to a lesser degree, are dominated by unpredictable events, and the emotions of every single person. Fear, panic, anger, calm… Leaders and the people who follow…

“All of this generates a fluid situation – in the case of playing as protestors it makes a kind of people ‘plasma’, if you will. But the same parameters impact the police in a different way, and indeed the different regions – in our game, the Egyptian police are not as disciplined as their Spanish equivalents, for example.

“We decided to keep this great depth, even if it makes the game a bit harder to play, as it is realistic and unique. But if you play with the lowest level of difficulty, AI will be less influenced by ‘realistic’ parameters, which means that you can better control everyone and more often override their AI.” 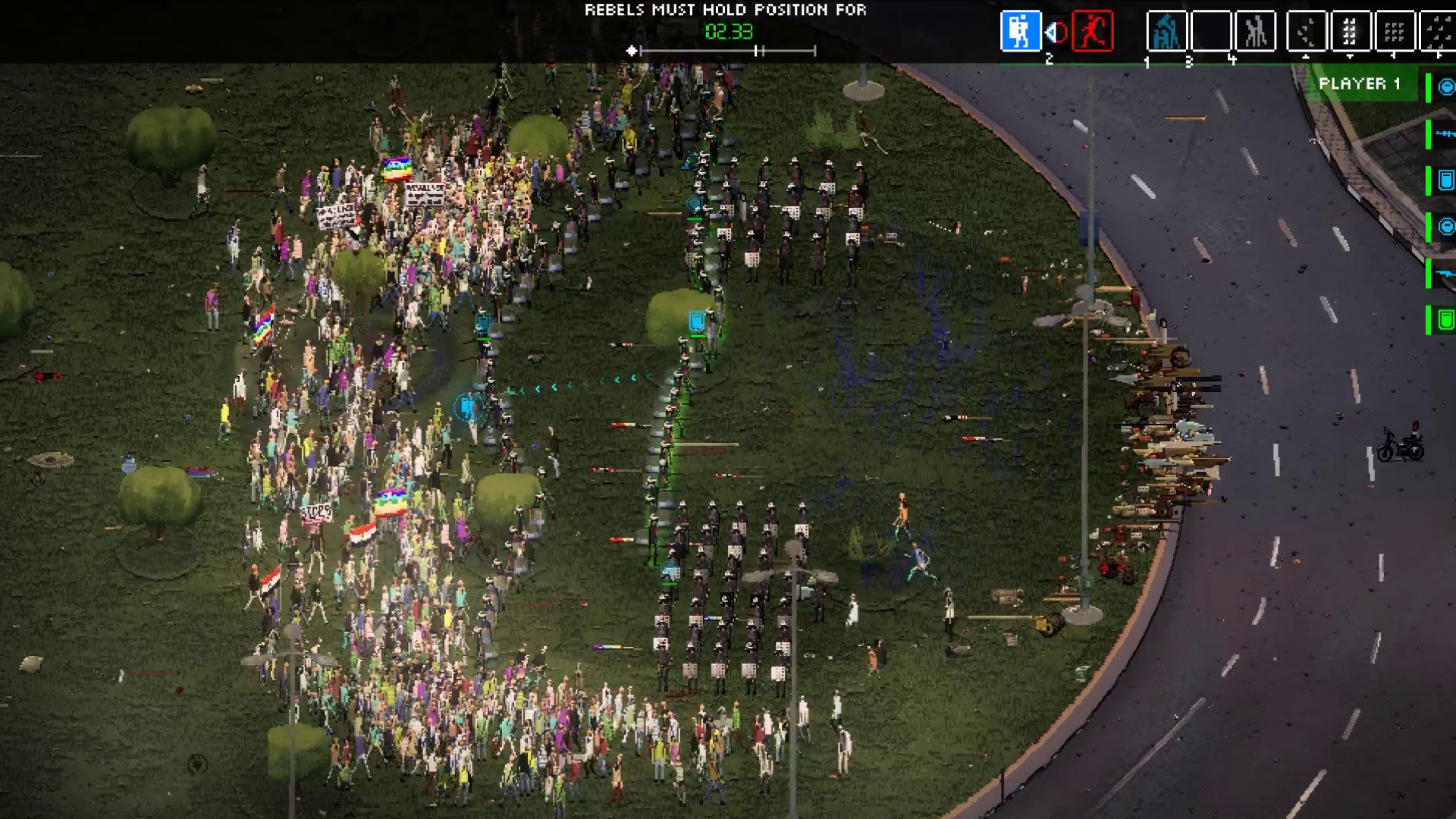 This aspect of the game has softened during its long development. Originally, squad AI was even more autonomous, but the team decided to tone this down – especially on the lower difficulties – in order to achieve a better balance between realism and, well, fun. Whether it resonates with players is something the team are looking forward to finding out when the game launches through Early Access on December 6.

“We aren’t too worried… maybe a little bit!” Venturi says. “But we’re going into this with eyes wide open. [That control scheme] is one of the key points we want to test and see how the community responds. We will study analytics, discuss with our players, and if needed we will modify things or add whatever we need to in order to make it the best game possible.”

Given the sporadic controversy that games such as Battlefield 1 and Call Of Duty: WWII have raked up due to their depictions of much more distant conflicts, Riot certainly risks touching a raw nerve or two. But that is entirely the point – this a game about protesting created by a passionate team that want to shout about causes which are close to their, and many other people’s, hearts. And doing so through the medium of a violent videogame might just be the most peaceful form of protest of all.