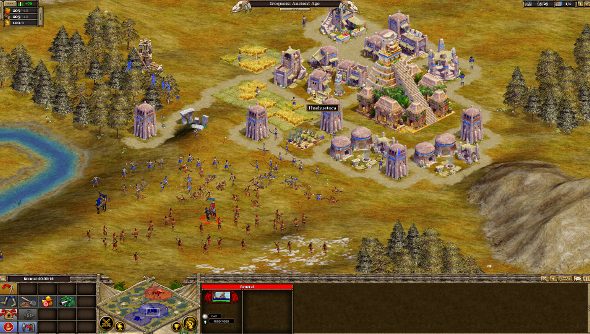 Civilization and Age of Empires – giants of their respective strategy genres. If only there was a way to combine them into some kind of Ultimate form. Well, that did actually happen back in 2003.

Big Huge Games’ Rise of Nations merged the RTS elements of Age of Empires with the macro strategy features of Civilization in one astoundingly good strategy affair.

And 11 years later, an enhanced version is about to hit Steam. So we’ll have Age of Empires II, Age of Mythology and Rise of Nations. It’s a good time to be a conquest-hungry strategy nut.

Rise of Nations got snatched up at auction earlier this year, after 38 Studios – which acquired Big Huge Games – went into liquidation. SkyBox Labs have given the game a fresh coat of paint, just as they did with Age of Mythology.

The Extended Edition contains both the base game and the Thrones & Patriots expansion. Also being thrown in is all this lovely stuff:

It’s due out at some point next month, and you can pre-purchase it now with a 20 percent discount. You really should, as it’s one of the greats.