The wait for Rise of the Tomb Raider on PC won’t be that long. Originally announced as an Xbox One exclusive, it quickly became clear that was not the case, with announcements that a PC version, and PS4, would follow eventually. Turns out ‘eventually’ is ‘not much more than a couple of months’ for us, as Lara Croft’s latest adventure will be launching on PC come January 28th and it’s going to look absolutely gorgeous when it gets here.

Tomb Raider is one of our most anticipated upcoming PC games. What are you in for?

Officially announced via a press release today, Rise of the Tomb Raider will launch on Steam and via the Windows 10 store. It will support 4K resolutions, as this set of extraordinary screenshots demonstrate. But what about the game? Will our Matt’s played it on Xbox One (yes, somebody who owns a PC also owns an Xbox One), and he wanted you all to know this:

“Rise of the Tomb Raider is bloody lovely. Its wide-open environments are as beautiful as their natural inspiration on Xbox One, so the PC version is likely to be stunning. Most importantly though, there’s a real, genuine sense of discovery in the game. As Lara you’ll be stumbling across all kinds of hidden gems and tombs in a manner that feels like true exploration rather than ticking off a checklist. And yes: the tombs are big, eureka-moment puzzles these days.”

As someone who really liked the reboot and was worried a sequel might not live up to it, this fills me with emotions like “yes” and “woo.” It’s going to be releasing at a standard $60 price point, along with a digital deluxe edition that will run you $90 and comes with some goodies, plus the season pass. That season pass includes “nearly all” current and planned DLC, which seems rather beside the entire point of a season pass to me, but there you go. Videogames in 2016.

You can also buy this monstrosity, if you’re feeling rich. It has the digital deluxe edition, some physibles and a 12-inch Lara statue which, as someone who once spent a year sitting across from the expensive collectibles cabinet in a toy store, looks rather nice as far as these things go. 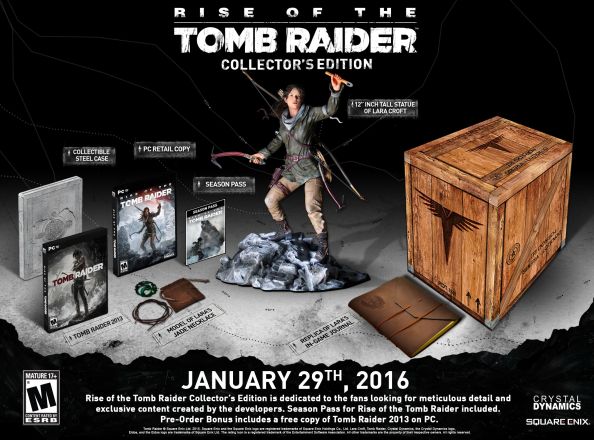 But where would you keep the crate?